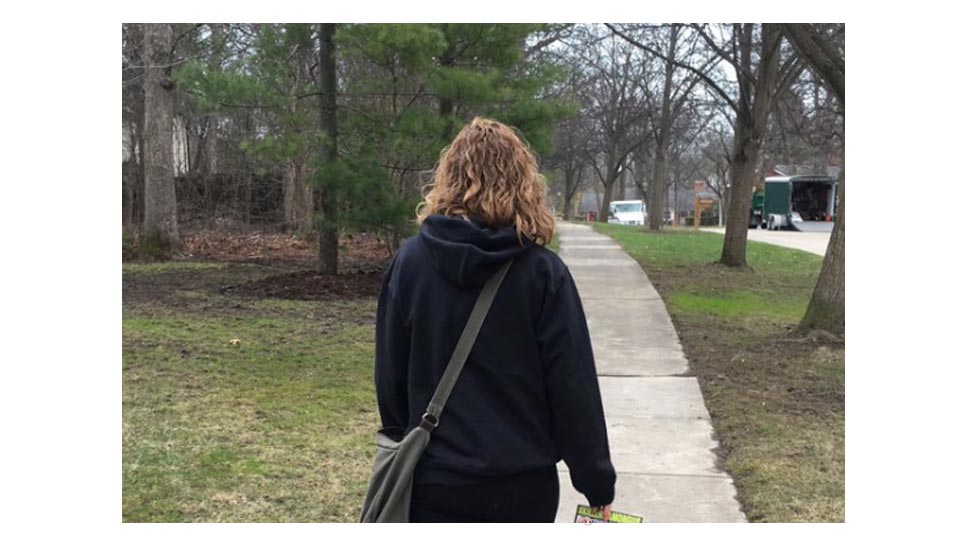 LAKE FOREST — Graphic anti-abortion leaflets left at the front doors of Lake Forest homes are causing a strong reaction from residents, though none of the activity is illegal.

Created Equal, an Ohio-based anti-abortion organization, sent people door to door here March 29 and 30 to distribute fliers in residential neighborhoods near at least one elementary school. The flier claims Lake Forest-based Stericycle disposes of aborted fetuses, and it calls on people to contact the company and its president-CEO, who lives in town.

“This is an unfortunate situation and I believe Stericycle is being unfairly targeted,” Stericycle President-CEO Charles A. Alutto said in an email to Daily North Shore. A company spokesperson said Stericycle’s policy does not allow disposal of fetuses.

The flier includes a graphic image of what the anti-abortion group claims is a fetus aborted at 15 weeks of gestation.

“This is obscene,” Lake Forest resident Lynette Paulsen said in a Daily North Shore interview. “I would not want children to pick it up and freak out. This is grossly inappropriate.”

“I spotted them as I was getting my kids into the car after playing at the park after school,” Horner told Daily North Shore. “I knew the flier was being put at front doors after a friend told me. I approached them and told them whether or not I agreed with the ‘point,’ it was wrong to put graphic pictures and leave them for my 7 and 4 year olds to see at the front door. The three were maybe 16 to 18 years old. They felt proud about what they were doing, but I explained this was going about it the wrong way!”

Paulsen said she has seen more than 70 critical comments (and counting) on a local, private Facebook page and nothing positive. But Lake Forest Deputy Police Chief Karl Walldorf said Created Equal’s activities were within the law.

“There was nothing illegal about what they were handing out or the way they were doing it,” Walldorf told Daily North Shore. “We have been taking complaints from residents and from some of the canvassers who didn’t like the way they were treated.”

Paulson said she started communicating with her neighbors to let them know what was going on in the neighborhood. “I texted my neighbors and let them know so they could pick them up before the school bus brought their children home,” Paulsen said. “They texted back ‘thank you.’”

Mark Harrington, Created Equal’s national director, said it was unfortunate children might see the image but that it was a price worth paying to prevent abortion.

“We are trying to put information out there,” Harrington said in an interview with Daily North Shore. “We do not intend to (target) children.”

One of the services Stericycle offers its customers is disposal of regulated medical waste, according to Jennifer Koenig, vice president of corporate communications. She said the company’s policy does not allow disposal of fetuses.

But an investigation by Ohio Attorney General Mike DeWine found Stericycle has disposed of aborted fetuses. Dan Tierney, DeWine’s spokesman, told Daily North Shore that an investigation into Planned Parenthood’s disposal of aborted fetuses found the organization put the material in containers, and that Stericycle took and disposed of the containers. Tierney said that when questioned, Stericycle representatives told the Attorney General’s Office the company was unaware there were any fetal parts in the containers from Planned Parenthood.

Koenig denied Stericycle intentionally disposed of fetal tissue. “Stericycle’s contracts with customers clearly states that fetuses should not be included with materials handled by Stericycle,” Koenig said in the email to Daily North Shore. “If a specific customer has indicated that it gave this to Stericycle, it has done so in violation of our contract.”