Lucia Prochnow was born in Chicago on June 2, 1934, the daughter of Willard Newhall Boyden and Angela Johnston Boyden. She died of cancer on March 10 at Westmoreland Nursing Center in Lake Forest. 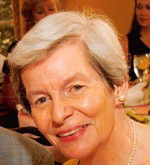 Lucia grew up in Lake Forest and was a graduate of both the Lake Forest Day School and North Shore Country Day School in Winnetka. In 1956, she graduated from Bryn Mawr College, where her mother and grandmother had also earned their college degrees. After college, and before her marriage, Lucia worked for a number of years as a text book editor at Rand McNally.

In 1966, she married Herbert Prochnow, Jr. at the First Presbyterian Church of Lake Forest. Both Lucia and Herb were in their early thirties when they married, late in the world of their post-war generation, but their marriage would have celebrated its fiftieth anniversary this coming August.

Lucia continued her connection with the publishing world after her marriage by serving as an editor of the journal of political philosophy, Interpretation. She also taught at and served as a Trustee of the Lake Forest Country Day School, from which both of her children graduated, and she was active for many years with the Lake Forest-Lake Bluff YWCA.

A memorial service will be held at the First Presbyterian Church of Lake Forest, 700 North Sheridan Road on Friday, April 1, at 2:00 pm.