Namrita Narula just wants to help. When she was in the eighth grade at Elm Place Middle School, she helped plan the school’s annual day of giving. It’s a day in December when families in need could come to collect canned food items, books, toys, clothes, and other items that the students had spent months collecting and organizing.

“That was the first time I saw the poverty in Highland Park and food insecurity that existed,” says Narula, now a sophomore at Highland Park High School (HPHS). “We collected over 5,000 cans of non-perishable food. That’s when I wanted to do something, because while these canned food items were helping curb the hunger, they weren’t necessarily improving the individuals’ diets.”

In the spring of her freshman year at HPHS, she started Seeds of Knowledge, which aims to teach children the importance of healthy eating through gardening while combating food insecurity. She met with the curriculum coordinator at the Highland Park Community Nursery School and Daycare Center (Community) and over the summer started an outdoor garden for the nursery school kids. She’d tend the garden with the kids and play games with them, such as Vegetable Bingo or a game where they separate foods into food groups.

Not satisfied with limiting the children’s gardening activities to the spring and summer, she sold greeting cards you can plant made from seeds and interactive seed starter kits for children called Growums at the Ravinia Farmer’s Market every week. She used the proceeds to buy five hydroponic, vertical, garden towers with time-release watering systems so the students at Community can grow different vegetables all year round. 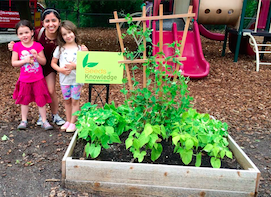 “I just thought the younger I start, the easier it would be to develop these healthy habits,” Narula says. “So many parents tell me that their kids would never try anything green before, but now, because they’ve grown it, they are so much more open to try it.”

But that’s just one aspect of the education and outreach of Seeds of Knowledge. She also partnered with the Northern Suburban Special Recreation Association to teach children and adults with special needs the therapeutic aspects of gardening. The plot they fostered was in the Moraine Township Food Pantry Garden, where they raised 93 pounds of produce to donate to the Moraine Township Food Pantry. 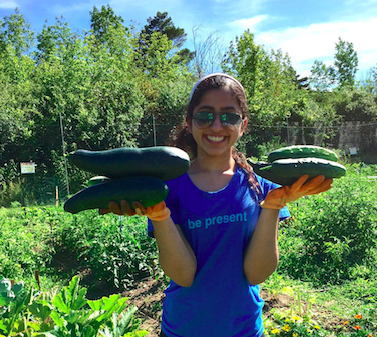 Having seen the good the food pantry does, she wanted to find more ways to help them. Enter her parking meters. While on vacation in Florida, she noticed a bright yellow parking meter, the change from which was donated to local homeless shelters. After a presentation to the Highland Park city council, she was put in touch with public works, and the parking meters were put into motion. The first appears to be a giant carrot standing in Port Clinton Square. The second has a variety of fruits and vegetables and the words END HUNGER painted on it and it stands in front of Michael’s on 2nd Street. She emptied the meters for the first time in January and had raised over $100, which bought more than 115 pounds of fresh produce for the Moraine Township Food Pantry.

“Currently, I’m trying to make Seeds of Knowledge a non profit,” Narula says. “I’m trying to register it for that whole process. I’d like to keep expanding and install some more meters. I’m trying to partner with more schools to keep that education component and also target more groups of kids. Then, I guess we’ll see if there’s anything more I can do.”