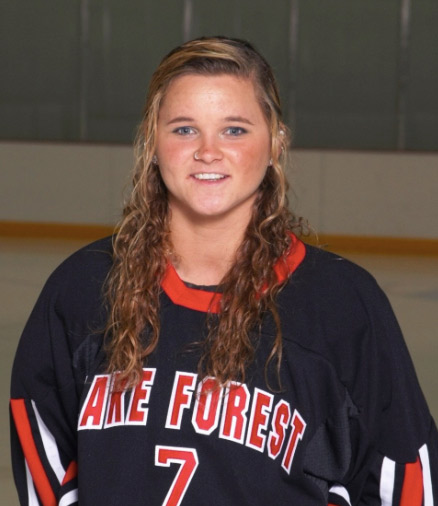 The announcement was made March 17 at the student-athlete banquet in advance of this weekend’s NCAA Division III Women’s Ice Hockey Championship in Plattsburgh, New York. There were five finalists for the award, including three from the four teams at the banquet see to compete over the weekend.

The AHCA Division III Women’s Player of the Year award has been presented each year since 2000. Laura Hurd, the 2005 recipient, tragically passed away in an automobile accident shortly after graduating from Elmira College that spring. Hurd finished her career with 120 goals, which is still tied for the most in NCAA Division III women’s hockey history.

Greeneway, a senior forward, leads the nation with a program record 33 goals this season, matching Hurd’s 2003 total and the fifth-highest mark in the NCAA Division III record books. She is also first in the country with eight game-winning goals and ranks fourth with 47 points. Greeneway, easily the Foresters’ all-time leading scorer, ranks tied-for-fourth in NCAA Division III women’s hockey history with 103 career goals and 20 game-winners in 101 career games. She joins Hurd and Elizabeth Gibson of Plattsburgh State, who also played from 2001-05, as the only players in the record book with more goals than games played.

Greeneway lit the lamp at least once in 19 of 27 appearances this season with 11 two-goal performances and her second career four-goal game. She scored in 64 and had at least one point in 76 games over the course of her career with seven hat tricks. Greeneway netted six power play scores in 2015-16 and 20 in her career. She also scored one shorthanded goal this season and is the only player in program history to accomplish that feat at least once in each of her four years on the team.

In addition to receiving the Laura Hurd Award on Thursday, Greeneway was named First Team West All-American by the AHCA for the second time in her career. She was a Second Team selection in 2013 and 2015 and is the only four-time All-American in program history. Greeneway is also a two-time Northern Collegiate Hockey Association Player of the Year and four-time All-NCHA honoree.

Lake Forest won a program record 20 games in 2015-16 against just four losses and three ties. In Greeneway’s four seasons combined, the Foresters were 66-26-13 overall and 51-14-9 in NCHA play with a regular season league championship and a pair of NCHA Slaats Cup Playoff titles and NCAA Division III Tournament appearances.

In addition to her performance on the ice, Greeneway has also excelled on the soccer field and in the classroom during her four years at the College. Her program record 104 career goals as a soccer player rank tied-for-13th in NCAA Division III history and she was named First Team All-Midwest Conference four times, MWC Offensive Player of the Year twice, All-Region each of the last three years, and All-American in 2014. She has earned Academic All-MWC honors in soccer and NCHA All-Academic Team accolades in hockey each year she was eligible for the awards and was a Capital One First Team Academic All-American in soccer this past fall after earning Second Team honors as a junior.