Glencoe’s Writer’s Theater opens the doors to its incredible new home after a $34 million capital campaign.
Words by Selena Fragassi and Photography by Robin Subar 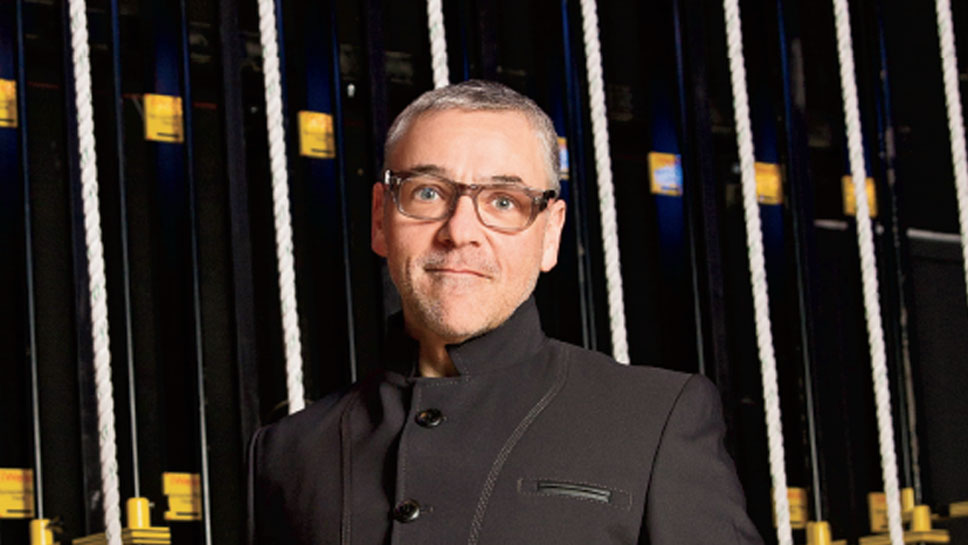 It took a village, says Artistic Director Michael Halberstam, a village to build his fledgling Writers Theatre company from a back room inside Glencoe’s Books on Vernon 23 years ago. And it took a village to build its future, housed in a stunning new theater center that was designed by internationally renowned Studio Gang Architects led by Design Principal Jeanne Gang and funded through the donations of nearly 300 families, corporations, foundations, and lead sponsors, many from within the community. Instrumental to the Capital Campaign “On To a New Stage” were its co-chairs Elaine and Richard Tinberg and Gillian and Ellis Goodman.

The new Writers Theatre will officially open its doors with a ribbon cutting ceremony on February 12, celebrating the end of a 16-month project. Facilitated by W.E. O’Neil Construction, this project saw the complete teardown of the old Tudor Court space, which was generously donated by the Woman’s Library Club.

“The former theaters were essentially ‘installations.’ I always wanted the company to have a permanent home, and now we had all the right reasons to make it happen,” admits Halberstam, himself a transplant from England who founded the company in 1992. After graduation, he began working as an equity actor for a number of years before finding himself unhappy with how theater was produced. “The focus had all gone to sets, costuming and directing, and the most important part as far as I was concerned was acting and text.”

Thus, the Writers Theatre was born and grew an audience of 3,200 subscribers in its first decade. Then in 2003, the Writers Theatre added another home in the Women’s Library Club of Glencoe building increasing its subscriber base to 7,400 by 2015. Named by the Wall Street Journal as “the best drama company in the nation” and taking its place among the most influential regional theaters in the Chicago area, it simply started outpacing its physical limitations— and the demand for tickets. Productions like the moving Diary of Anne Frank and the world premiere of A Minister’s Wife would sell out before the curtain was even drawn.

“As the theater grew in scale, it became more difficult to encompass the sophistication of the art,” says Halberstam. Realizing the growth potential, he and Executive Director Kate Lipuma, and their executive team—including Director of Institutional Advancement Kim Swinton and General and Project Manager Jon Faris—put out requests for proposals to nearly 30 architecture firms, but within 15 minutes of meeting Studio Gang Architects’ Jeanne Gang, “We had gone beyond the interview to already planning the building and never looked back,” says Halberstam. “Her great talent is that she has manifested the identity of this organization within her architecture to perfection.” 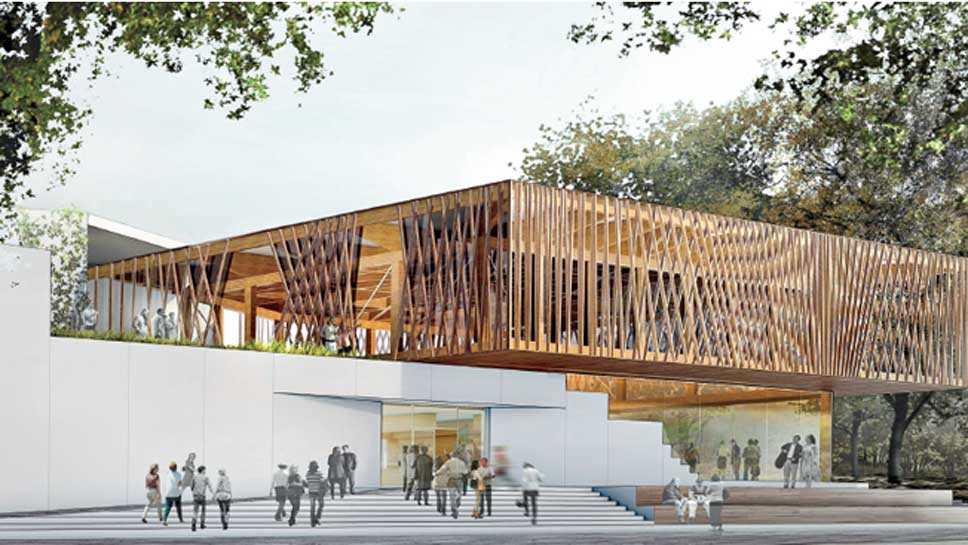 Rendering of the new Writers Theatre

Gang put together blueprints for a seamless indoor/outdoor “theater in the park” design. One that is not only responsive to its suburban setting and hyper functional, but also sustainable. “We recycled 98% of the former Woman’s Library Club building,” says Swinton, including using the old bricks for an acoustic wall in the new theater space and repurposing much of the wood from the trees that had to be plowed for the new site. The theater received a grant from the Illinois Clean Energy Foundation for the environmental strategies, which also included the addition of bike racks, energy-efficient mechanical systems and maximizing daylight as a natural light source. It is currently in the application process for LEED Gold Certified status from the U.S. Green Building Council.

Though those details might fly under the radar, what patrons will notice is the earthy vibes of the Grand Gallery Walk, a second floor suspended walkabout made out of cedar planks. They will also notice the floor-to-ceiling sliding glass doors in the main lobby (called the Litowitz Atrium for donors Jennifer and Alec Litowitz) that have special etchings for bird safety. In addition, the Bill & Stephanie Sick Rooftop Terrace will be outfitted with patio furniture and fire pits (and soon, ivy!). There will also be the Green Family Rehearsal Room—named for donor Mary Winton Green—that overlooks Friends Park and will double as a muchneeded gathering space for the theater’s educational outreach program that impacts 10,000 students annually.

“Our goal was to create a performing arts center used for theater but also for gathering people,” says Lipuma, noting that the facility will be open year-round, even on non-performance days when visitors can enjoy coffee and wine in the outside areas (the new building will have expanded concessions and several bars). “Every space was designed to be used for its primary intention but also a variety of other activities,” she says and Halberstam agrees. “I hope the new
building can serve as a cultural hub.”

The heart of the theater though is truly the stage, and for the first time in its history, the Writers Theatre will have both of its stages now enclosed in the same building, increasing its capacity to 355 people (up from 150 combined seats prior) and allowing for an average of six productions per year. Included are the flexible 99-seat-max Gillian Theatre (named by Gillian and Ellis Goodman) and the building’s marquee, the 250-seat Alexandra C. & John D. Nichols Theatre. Though both spaces contain state-of-the-art features that include a fly system and induction loop hearing assistance, both spaces also maintain the intimacy Writers Theatre is known for. With only two to three added rows in each section, “audiences will still feel connected to the art in the same way that they always have at Writers Theatre,” says Lipuma.

The Nichols, whose philanthropic contributions include sizable structures within the Art Institute of Chicago, the Lyric Opera of Chicago, the Music Institute of Chicago and the Chicago Botanic Gardens among many other cultural institutions, have been patrons since the beginning of Writers Theatre. Alexandra previously worked with Halberstam on a project for the Chicago Symphony Orchestra in the ’80s, and she and her husband have supported him on his ventures ever since, including the couple’s most recent $5 million gift to the Writers Theatre campaign. 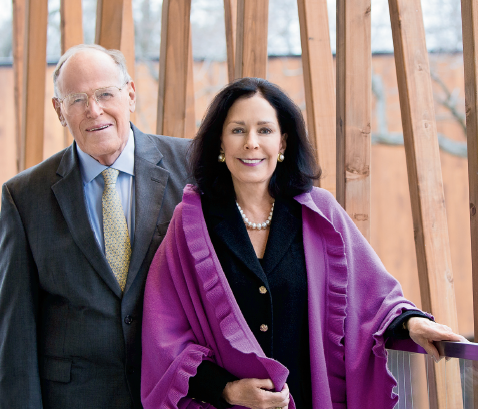 “The reason that we wanted to be lead sponsors for this capital campaign to build the theater is because we hoped it would inspire a wider and more generous audience and give Writers Theatre the recognition it deserves,” Alexandra says, calling it “transformational” for the entire North Shore. “For our part of the world, which is not always regarded as a cultural destination, this will make a dramatic sea change. People will come, not only locally but also nationally and internationally, because it has established itself as a very important and relevant institution now, and that’s really the genius of Michael. He has such different perspectives and approaches to performance that are not comparable to any other production in the city or beyond.”

The new season promises to be no different, opening with Tom Stoppard’s Arcadia, and continuing with Death of a Streetcar Named Virginia Woolf: A Parody and finally closing with Stephen Sondheim and George Furth’s musical comedy Company.

“All of them ask questions about identity and what it means to be true to yourself, which is a very important conversation to be having at this point of our development,” says Halberstam adding that lately he’s very interested in exploring ideas of diversity, equity, and inclusion, and hopes that it stirs others as it does him. “The most exciting aspect of Writers Theatre over the years has been our audience who, by and large, have their hearts and minds and arms open. I like to believe that our success has been knowing how to engage with our community respectfully and never taking them for granted.”