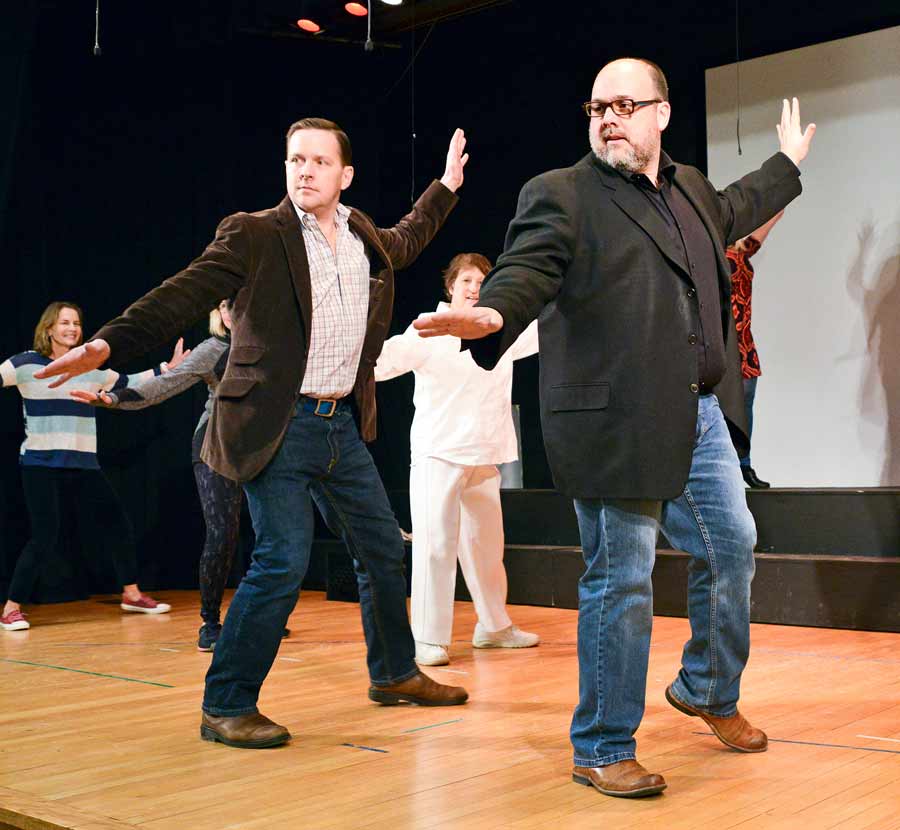 WILMETTE – Parents volunteering in the Variety Show at Wilmette’s McKenzie Elementary School are in the final stages of rehearsal as they prepare to put on the 36th annual show that entertains the entire community and is the school’s largest fundraiser to boot. You heard that right, 36 years and counting has made this show a tradition that nearly defines community for the school.

“The McKenzie community loves this show and it has become an institution,” said Rob Kunzler, this year’s show producer.

The McKenzie Variety Show is unique in that it is not a student talent show, but rather a show created, directed, produced and performed entirely by parents. On any given year, audiences are entertained by a dedicated group of volunteers who are willing to dress up like dogs as they sing catchy tunes or tap dance while wearing cupcake costumes.

“This is a big commitment,” explained Michael Clarke, show director. “It’s great because the whole community comes together and chips in.”

Indeed, starting in June 2015 Clarke and Kunzler and other parents involved with the production began the process of choosing a theme for this year’s show. Every year, the show has a different theme that ties together each of the 20 or so acts. For example, last year’s show was called “This is McKenzie” and each act celebrated a unique aspect of McKenzie life. But this year Clarke and Kunzler decided to take the show in a new direction and tackle a theme never done before, which can be tough given the show’s long history.

Director Clarke was handed a large bank box overflowing with old programs and notes going back 35 years. He poured over each one of the programs to ensure that they were not repeating old ground. They finally narrowed it down to one theme: walking through the history of rock ’n roll.

“It was a concerted effort to move away from last year,” Clarke said. “We tried to create a stand-alone show that could be performed anywhere.”

The theme is a coveted secret that is revealed to the students two weeks before the performances on a school bulletin board. Students eagerly await the day the theme is revealed, and the school buzzes with excitement.

This year a screen above the school auditorium stage will feature an iPad that shuffles through the songs, introducing students to new songs they’ve never heard, while entertaining parents with some oldies but goodies. “The songs will be recognizable but I am certain we will step on areas where students have never heard a song,” Kunzler said.

Once the theme was chosen, parents spent the summer creating new lyrics to popular songs from each decade starting with the 1950s to the present. “There is a ton of work between August and October [as] we nail down performances,” Kunzler explained.

Oscar Alcantara, who is the music director and has volunteered on the talent show for the past 13 years, takes the lyrics and records them with his own voice over tracks for rehearsals. His band Run for Cover also plays all of the music at the performances.

This year about 125 parents are volunteering for the production, a record number with many new parents joining the fun in addition to alumnae. And this year many more men have joined the ranks, in fact so many that Clarke and Kunzler decided not to do a men’s-only number, which was historically included in the show. But the show will include traditional favorites, such as a hip hop and tap dancing number.

And while the men are clearly passionate about the performance itself, they don’t lose sight of the real reason why so many people volunteer for the show. “It’s the sense of community and rallying around McKenzie,” Kunzler said.

Indeed, variety show volunteers take community building seriously. A social committee organizes events at local restaurants each week after rehearsal. “We seem to help the local economy as much as we can,” Clarke joked.

Clarke has enjoyed the connections he has made through the show, having performed in it for the first time last year when he had just moved to Wilmette. “I’ve gotten to know these people who are part of the creative team. We are so close now,” he said. He’s also impressed by the talent and dedication of other parent volunteers. For example, Sylvia McGreal wrote six of the 20 songs included in the show. Clark is amazed to “see someone like Sylvia take a swing at it and be successful.”

Tickets for the McKenzie Variety Show go on sale  Monday, Feb. 22 at 9 a.m.; go to www.mckenziepta.com to purchase.

The parents put on a total of eight shows March 7-12 — beginning with an alumnae night where only alumnae are invited to attend the performance — and then a show each night of the week with a finale of two shows on Saturday, one that is light and sound sensitive for kids with special needs.

“Its truly a labor of love,” Kunzler said.