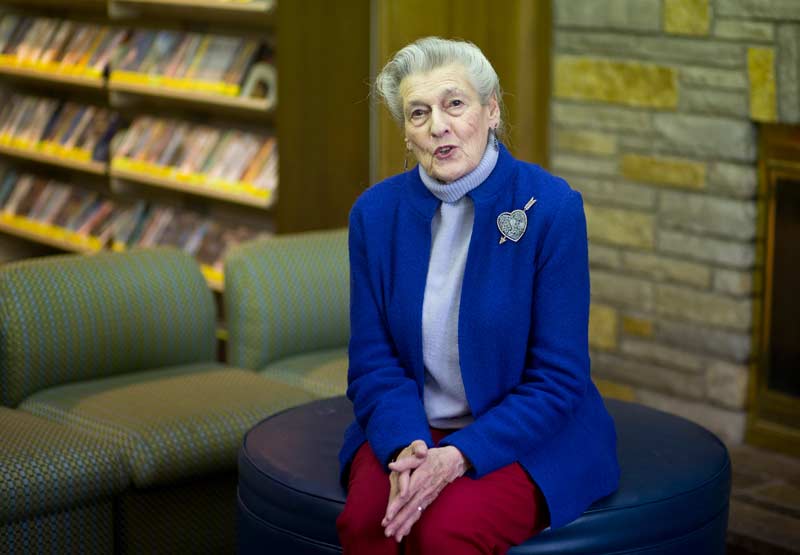 Leah Axelrod in the Highland Park Library. On Wednesday she will give a talk about Wildwood: The Origins of the Summer Resort and History of Jews on the North Shore. Photography by Joel Lerner/JWC Media

When they arrived, only a few Jewish families lived in Highland Park, but by the 1920s there were two Jewish country clubs, a synagogue and a year-round Jewish community.

“We had our own Newport Rhode Island on the North Shore,” said Leah Axelrod, referring to Wildwood. Limousines with cooks and maids would drive up to the compound and stay with the families for three or four months in the summer, she said. Children ate breakfast together while their mothers slept in and their fathers would go off to work on the commuter train.

What makes the Wildwood Experience unique is that it occurred when only a handful of Jewish families lived in Highland Park.

“There were places that would not have welcomed Jewish people,” said Axelrod. “These families bought the property, built it, and controlled it. They created their own Jewish community.”

To develop the Wildwood compound, the Foreman, Leopold, Schwab, and Steele families purchased a half block of land on Hazel Avenue just east of Linden, walking distance from the beach.

Nathan Leopold’s son Nathan Jr., who spent summers at Wildwood, was later convicted in the Leopold and Loeb 1924 “Trial of the Century” for the slaying of a 14-year-old.

Miller said the four families built five buildings — four homes and a clubhouse where they ate lunch and dinner together  and held recreational activities. Each house only had a pantry for cold meals and snacks. “The German-Jewish families were related through blood or marriage,” said Miller.

There were various reasons for the closure of Wildwood in the early 1920s. “Birdie and Alfred Schwab’s house, which was just east of the Foreman’s, burned down,” said Miller. “At the same time, Oscar Foreman decided, because his wife had died, his children were grown and there were no grandchildren, he no longer needed Wildwood.” The last remaining home is on  the southeast corner of Hazel and Linden.

The Wildwood presentation evolved from a Historical Society exhibit by Miller and Jean Sogin approximately three years ago. The research was compiled from scrapbooks, interviews and memoirs. “I’m interested in local history and in the Jewish community of the North Shore,” said Miller, a 28-year Highland Park resident.

The history project began when Miller read an article in the Highland Park Historical Society by Marion Stern, a descendant of the Steele family. A few years ago, Miller located the 94-year-old Stern in a retirement home on Sheridan Road in Chicago and spoke to her about the article she had written in the early 80s.

“Marion was very with it when I interviewed her,” said Miller. “I visited her with Jean Sogin several times, and she left us a scrapbook with photographs.” Sogin worked with Miller and Axelrod on the Historic Preservation Commission, and Highland Park Historical Society.

“Marion is the last person who had first-person memories of Wildwood. Her mother was a Steele,” said Miller. On Feb. 17, Axelrod will recite Miller’s power point presentation in Marion Stern’s voice. 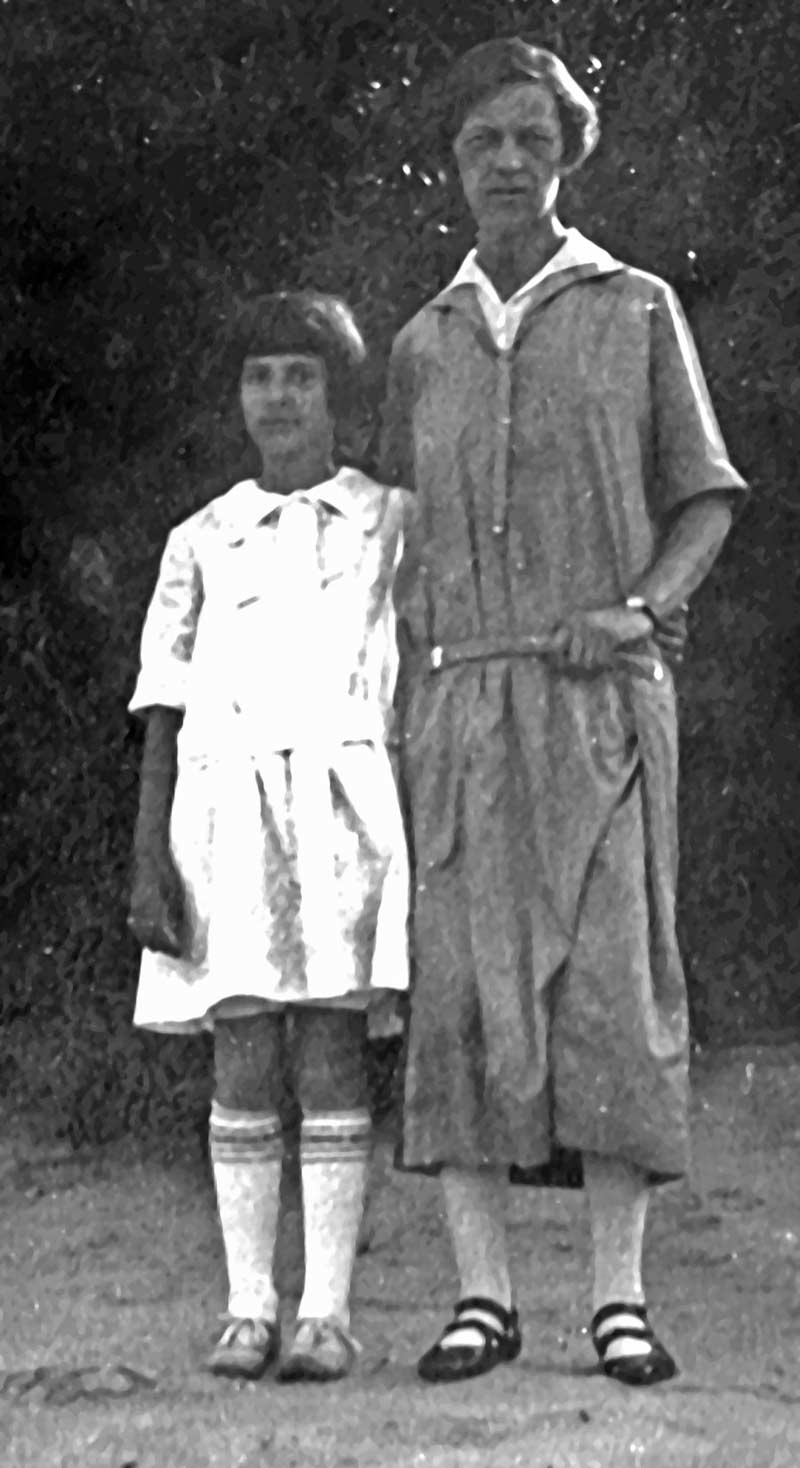 Marion Stern with her governess in 1923; photo from the Highland Park Historical Society archives

Axelrod has had a lot of experience speaking in front of an audience. She began as “Storytime Lady” at the Highland Park Library when her six children were growing up, is currently a guide at My Kind of Town Tours, and has been involved in many community projects in between. “I’ve worked to retain the character of the city,” she said. 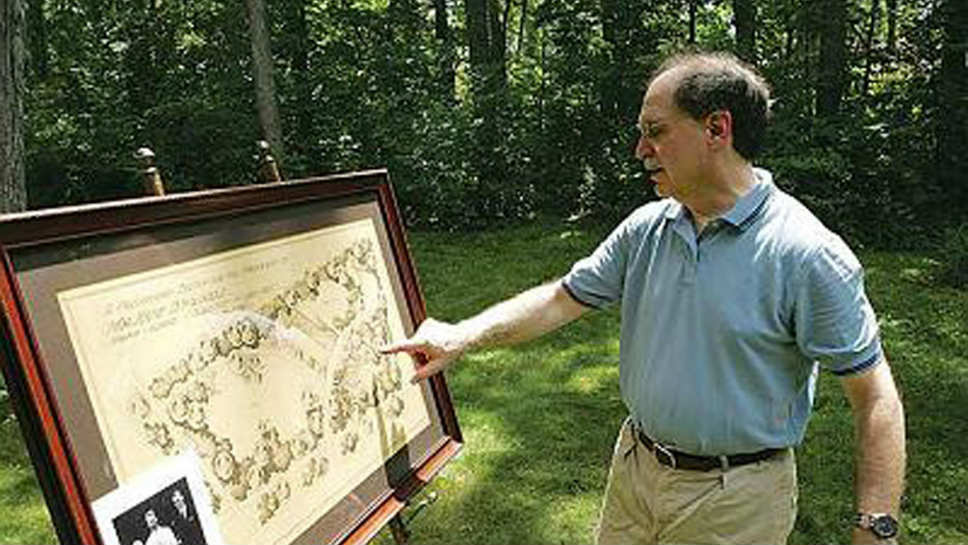 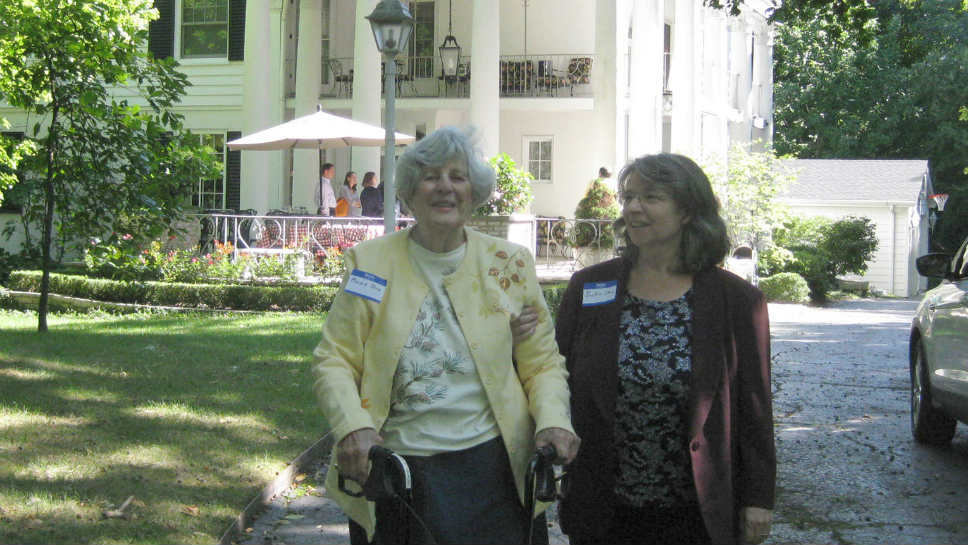 Marion Stern with her daughter outside Oscar Foreman’s home at a 2012 Foreman family descendants reunion: photo courtesy of Elliott Miller

Highland Park Historical Society’s archives have moved to the Highland Park Public Library at 494 Laurel Avenue. Archivist Nancy Webster will be available Tuesday-Friday from 11:00 am until 4:00 pm and Sunday from 2:00 pm until 4:00 pm. It is best to call in advance for an appointment.