Irina Kuznetsova was having horrible postpartum depression after giving birth to her first child.

“I went completely nuts,” she said on a recent afternoon. “I thought I was dying—I developed all kinds of phobias.” With that added anxiety and stress came a lot of physical ailments. She was clearly suffering, but all of the doctors her and her husband, Karim Raimbekov, went to all said the same thing: they could find anything that was life threatening. But nothing was changing for the better, either. 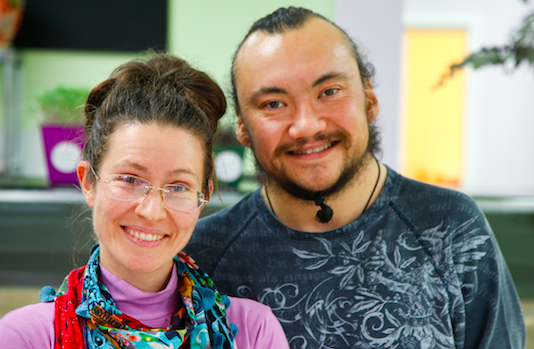 That is, until she started to eat her way out of the situation. Around five years ago, Kuznetsova was introduced to a plant-based diet. She took cooking classes, because she had no idea what to do without the presence of meat, diary, eggs, and sugar in her life. Originally from Kazakhstan, Kuznetsova and Raimbekov had grown up with a significant amount of dairy products and meat in the kitchen.

“A meal without meat was not a meal to me—that was like a snack,” said Kuznetsova.

At her initial class, when she was first introduced to the macrobiotic diet—or the original counterculture diet of the 60s that has seen a widespread revival—people looked at her like she was crazy, she tells me. On the most basic level, the diet is founded on the premise of balancing whole grains and fresh vegetables. But how was she going to survive on such limited food groups!

It turns out, not only could she do it, but she wanted to inspire others with the healthy dishes she was creating. That grew into a full-blown business, The Purple Sprout Cafe, at the Riverside Plaza in Wheeling.

The Purple Sprout Cafe is the family’s answer to clean eating, offering vegan and gluten-free choices that includes raw and cooked food, smoothies, juices, and sugar-free desserts. Food items such as raw cheesecake, lentil dumplings, yucca balls and lentil nori power wraps can all be found on the menu. A different soup is offered every day.

The café offers organic meals made with ingredients from local farmers, but no sugar or preservatives. It also features a smoothie and juice bar including; the Powerhouse, made with carrot, apple and sweet potato and a wheat grass shot, and the Fountain of Youth, with apples, kale, celery, lemon, ginger and parsley. As well as wholesome desserts from cookies to cheesecakes and even ice cream, all hand-made with no refined sugar added.

In the beginning, when Kuznetsova originally started down the road on her vegan diet, the family initially resisted. “There was a lot of tension in the family,” she says, laughing. But eventually, her children and Raimbekov came around. Now the family eats what they prepare—for customers and themselves—every day. The diet is their life. And Kuznetsova hasn’t looked back, and hasn’t suffered since.

The Purple Sprout Café is located at 341 E. Dundee Road in Wheeling. For more information call 224-223-7133 or go to their Facebook page. 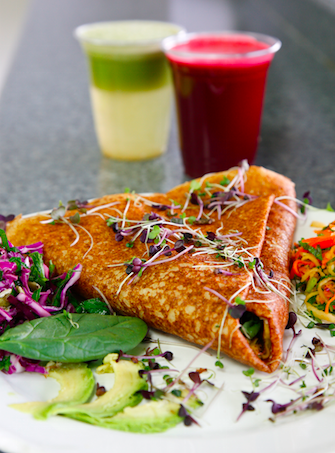 Vegetable or seed oil of choice