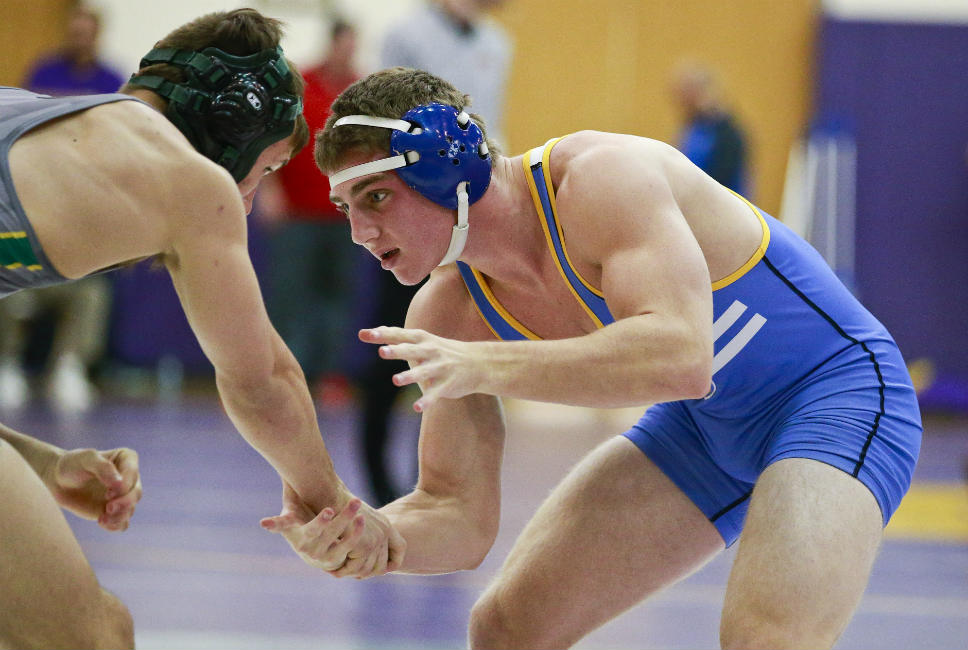 Fiordirosa showed up to educate football players about the joys of wrestling. Maybe a few would then come out for the sport in the winter.

Devin Reich, a freshman quarterback on the freshman ‘B’ team at the time, listened to what Fiordirosa had to say. A good friend of his was all ears, too.

They did just that. Reich, a former Gurnee resident, got off to an 0-1 start. He then lost his second, third and four matches. Joy was hard to find. On the day of his fifth wrestling bout, “something changed,” Reich says. The young Scout recorded a takedown. The young Scout’s confidence took an abrupt route, due north. Reich won that bout. Reich won his next 11 bouts after that breakthrough victory. From 0-4 to 12-4, from a winning percentage of .000 to a winning percentage of .750.

“Devin liked the competitive nature of the sport when he started,” Fiordirosa says. “He still does. He has come a long way from the time he wanted to try wrestling because some of his football buddies wanted to try it. He bought in, especially the lifting part of it. He’s my weightlifting partner, a really strong kid, jacked.”

None of Fiordirosa’s Scouts — who won a program-record 16 duals in 2015-16, supplanting a mark that had stood since 1996 — claimed a championship in a weight class at the highly competitive North Suburban Conference wrestling meet at Wauconda High School on Jan. 30. Only one Scout finished runner-up in a weight class.

The one: Reich, Devin Reich, the kid with an 0-0 career record in wrestling from date of birth to the date of his first freshman class at LFHS.

Reich defeated Lake Zurich High School junior Kyle Fleming 6-1 in an NSC Meet semifinal at 182 pounds, avenging a 5-0 loss in the regular season. Reich (21-5) had earned a bye before advancing to a semifinal round with a 3-1 defeat of Libertyville High School senior Kyle Smith. Stevenson senior Michael Kordek solved Reich 10-1 in the bracket’s title match. How good is Kordek (31-4)? How polished was his performance against Reich? It looked like Kordek started wrestling on the first day of his first bib year.

“Devin,” Fiordirosa says, “is calm and cool. Nothing bothers him. Nothing scares him. Going up against a kid like that Stevenson kid in a final? Devin would never be afraid of such a challenge. He welcomes a challenge like that. Wrestling is a hostile sport staged often in a hostile environment. I’d consider the NSC Meet a pretty hostile setting, loud and intense. Devin likes everything about a meet like the NSC Meet.”

Reich became a two-time all-NSC mat man last weekend. He had earned all-NSC honors last winter, with a fifth-place showing at 182 pounds. He was an outside linebacker/safety in his final football season last fall. The former quarterback ran around and tackled hard as an inside linebacker in his sophomore season. He was a running back/linebacker in his junior season. People stopped asking him, “How many positions have you played?” They started asking, “Where haven’t you played on a football field?”

“Passionate about wrestling, passionate about football,” Scouts senior Gage Griffin, third at 126 pounds last weekend, says of Reich. “There’s nothing flashy about him, and that’s what [Fiordirosa] likes to see from his wrestlers. Devin got good, very good, at one or two things in this sport, and he stays in a good position when he wrestles.

“Very funny, too, a great kid, gets along with everybody,” Griffin (30-5) adds. “I’d also call him a jokester. He poked fun at me before the conference meet, reminding me I had missed all-conference [top five in each weight class] by one spot last year.”

Whenever Reich lifted weights last summer, Fiordirosa was nearby, lifting or spotting, talking with Reich, laughing and bonding. Reich considers Fiordirosa a good friend. The respect Reich has for the head coach is incalculable.

“Coach Fiordirosa brings out the animal in me when I wrestle,” Reich says. “Great coach, great motivator, great guy. I learned a lot of the technical aspects in the sport from [freshman] Coach [Tony] Filippo.”

Reich, future entrepreneur, plans to attend either Auburn University or the University of Alabama in the fall. His vision, post college: to own a medical facility. Reich wouldn’t mind finding himself on the University of Illinois campus in Champaign later this month, specifically inside the State Farm Center. State wrestling bouts will be held there. But first things first (regional tests), followed by second things second (sectional tests).

“He has a shot,” Fiordirosa says.

Notable: Lake Forest High School finished eighth (78 points) at the North Suburban Conference Wrestling Meet at Wauconda High School on Jan. 30. The Scouts received all-NSC efforts (top five) from senior Devin Reich (runner-up, 182 pounds, 21-5 record), senior Gage Griffin (third, 126, 30-5), senior John Frauenheim (third, 170, 32-3), sophomore Caleb Durbin (fourth, 132, 25-12) and junior Cory Barth (fifth, 195, 29-8). … NSC Wrestling Meet officials recognized a Sportsmanship Award winner from each school on Jan. 30. Griffin was the Scouts’ pick. “This is a very physical sport,” Griffin said after his 7-6 defeat of Zion-Benton’s Justin Williams in the bout for third place at 126 pounds. “It requires aggressiveness. If you’re going to step on a mat, I’m going to respect. I respect anybody who wrestles. Respect and sportsmanship go together.” Griffin rallied from a 6-1 deficit in his match against Williams. “I started kind of slowly,” he admitted. “What helped was what I learned at a [ 28-day] summer camp at the University of Minnesota. You have to have a certain kind of mentality and maintain that mentality in a match, no matter how you’re doing, no matter how far behind you are. My mentality in matches is, ‘Keep working, keep thinking positively.’ ” … There might not be a more focused wrestler before a bout than Griffin. Watch him walk — no, pace — before bouts. Forget about looking for a smile from Griffin, or a blink. “Wrestling isn’t a three-month sport to me,” a straight-faced Griffin, a medal in his possession, insisted. “It’s a lifestyle, and I embrace it.” … The Scouts vie for Class 3A sectional berths at the Deerfield Regional on Feb. 6.