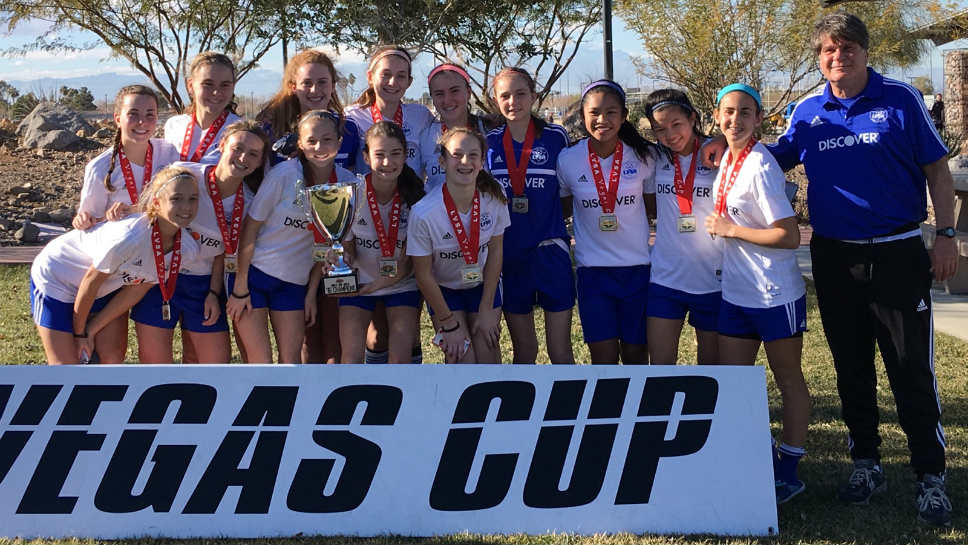 The LFSA U14 Girls Select team pose after winning the Vegas Cup Tournament.

The Lake Forest Soccer Association (LFSA) U14 Girls Select went 6-0 to claim first place at the recent Vegas Cup Soccer Tournament in Las Vegas. By winning this prestigious event, the team is now ranked fourth in the GotSoccer National Rankings and first in the Midwest.

The Oktay Akgun-coached squad put the finishing touches on the title by downing West Coast FC ECNL of California 2-1 in the final. Bridget Mitchell and Alicia White scored the goals. Callista O’Connor and Malori Killoren were credited with the assists. Goalie Sophia Divagno finished with six saves.

LFSA Select featured a stifling defense. The team gave up only five goals in the six games against some of the top teams from the West Coast and Texas.

LFSA Select advanced to the championship after beating Norcal Premier 2002 State Pool (California) 2-1 in the semifinals on goals by Sokol and Julia Loeger. In quarterfinal action, the team topped Solar Chelsea O2G Red of Texas 2-1 on goals by Loeger and assists by O’Connor and Killoren.

In pool play, LFSA Select went 3-0. Ingrid Falls and Mitchell scored in a 2-1 win over AZ Arsenal 02 Premier of Arizona. Loeger, Killoren and Mitchell tallied the goals in the team’s 3-0 victory over Sting Central of Texas. And Falls and Killoren had two goals apiece in the 4-1 triumph over Players SC Elite 02 AP of Nevada. The pool play assists belonged to Killoren (3), Mitchell (2), Falls and Lara Dulaca.

Over the past 12 months, this squad has competed in seven tournaments in six states. It has posted a 26-4-1 tournament record with three championships and two runner-up titles. It also has been a semifinalist twice.

Over the past three years, the team has dominated state play, winning back-to-back state championships while losing only three of 42 league games.