The sun was nothing more than a reddish apparition in the sky when the two figures got up and started to move about. One was a Peruvian woman in her nineties. The other was Tony Castillo, chef and co-owner of Longitud315 in Highwood.

Castillo had met the woman in Cusco, on one of his gastronomic tours to South America. There, in the marketplace, or qhatu, the old woman was selling her wares—a street vendor selling her food, made countless times by hand from recipes handed down over generations. Castillo wanted to know more, but his guide warned him in Spanish that the Quechua people—who speak a dialect that can be traced back to their ancestors, the Incas—don’t usually talk to strangers. 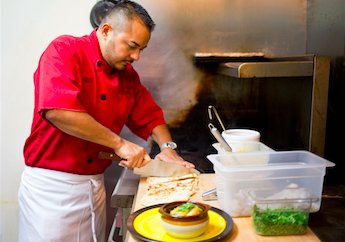 Not only did this woman, the matriarch of the family, agree to talk to him, she invited him back to her home. The only caveat was they would have to adhere to her schedule: Waking up at the crack of dawn to walk the four miles to the qhatu, a commute she travels by foot each day. All of a sudden, at 4 a.m. or so, Castillo found himself being taught the ancient preparation of this woman’s recipes—recipes Castillo now serves at Longitud315.

“The whole idea of this restaurant is to stick as authentic as possible and to offer food that, if you go to South America, you will feel familiar with,” said Castillo on a recent afternoon in Highwood. “[But] more than the recipes, it’s about the techniques.”

When he was being shown how to prepare the cuy chactado, or guinea pig, Castillo may have thought back to his own abuela. It was from her that Castillo learned how to cook, which blossomed into a full-blown love of cooking. (“One day you will be a chef, and this is the food you will serve,” she told him.) As a boy in Sucre, a coastal state in Venezuela, he would go fishing with his abuela for shrimp. Together, they would peel the shrimp, sauté it with garlic and olive oil over a wood-fired oven, and, to top it off, they would add an amarillo pepper sauce over top.

“This is a really great dish that can be done easy at home,” said Castillo, who was in the middle of preparing the dish in the kitchen at Longitud315. “[My grandmother] would make the sauce from amarillo, which is basically baby yellow pepper. It has a little bit to it—just a little spice.”

Stop by Longitud315 this weekend, and you will find the restaurant closed. That’s because for two weeks every January, Castillo sets off on a gastronomic excursion across South America, using the experience to inform and influence his restaurant’s menu for the entire year. Right now, his annual pilgrimage is taking him to seven different cities in Columbia. Castillo will bring back with him the rarest of treasures—an authentic recipe, prepared with the proper technique, for his customers to enjoy.

“I love to go to the markets and meet people that are selling food there,” said Castillo. “This is where you really get to learn how to make food.” 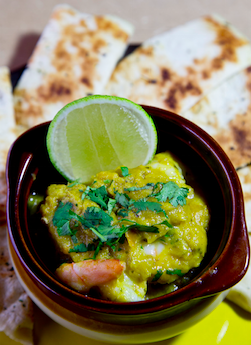 Clean, peel and devein the shrimp. In a medium-sized pan, melt the butter and sauté the shrimp on medium heat. When the shrimp is turning pink, add Amarillo Pepper Sauce and let cook for another 3 minutes or until the sauce is hot—while not over cooking the shrimp.

Serve hot in a ceramic bowl, garnishing with cilantro and lime wedge. “You can also add pita points, tortilla chips, or plantain tostones like we do at Longitud315,” said Castillo.

2 yellow bell peppers, cut in half with seeds and stem removed

Salt and pepper to taste

Put oil on a pan at medium heat and sauté bell peppers, onion, and garlic. Let cool. When cold, put everything in a blender—including mayonnaise, cilantro, lime, and salt and pepper to taste.