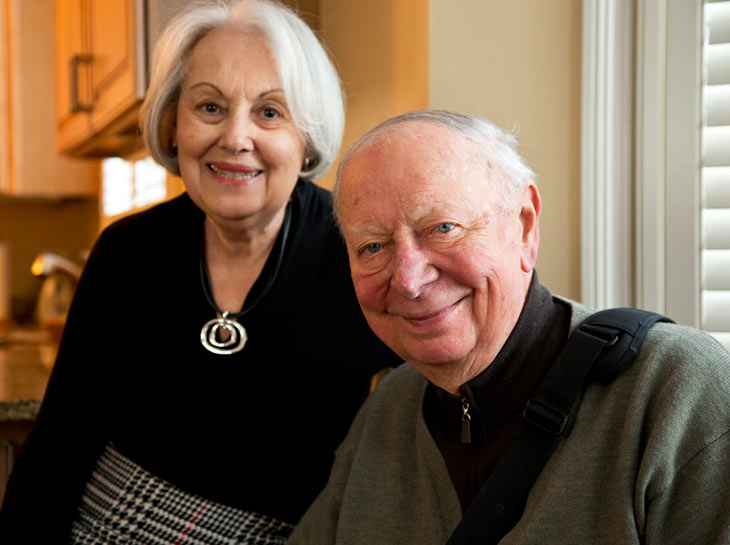 LAKE FOREST — Giving back to a society that has rewarded them is the essence of the lives of Roger and Pauline Mohr of Lake Forest through 58 years of married life and before.

The Mohr’s years of service to the City of Lake Forest was recognized when they were given the Lawrence R. Temple Distinguished Service Award Jan. 19 during a City Council meeting at City Hall. This is the first time there have been two recipients.

Roger Mohr has served as an elected and appointed city official, among other jobs, and Pauline Mohr worked on the Market Square Restoration Committee and the Lake Forest Preservation Foundation, among other things. But their service has gone beyond the city’s borders.

Roger Mohr went to Marquette University on an Evans Scholarship earned through caddying at Milwaukee Country Club. He started helping other young men who carried golf clubs do the same right after he entered the workforce.

“I’ve been very active in the Western Golf Association and the Evans Scholars,” Roger Mohr said. “It was so good to me I felt I should give back.”

An Evans Scholar recipient gets his or her tuition, room and board completely paid, according to Roger Mohr. He said more than 10,000 people have graduated college this way. After long-term involvement with the WGA and Evans Scholars, he got involved building the Evans Scholars’ endowment.

“We had enough to take care of the kids in school but needed to do something about the future,” Roger Mohr said. “Today it’s $69 million.”

Pauline Mohr said the endowment was zero when her husband started building it and that it grew to $20 million in its first 14 years while he was in charge.

Moving to Lake Bluff in 1963 and Lake Forest 11 years later, one of Pauline Mohr’s first plunges into volunteerism was assisting the Panel of American Women, being one of four women in a group spreading a message of racial and religious equality.

“We would have a Catholic, a Jew, an African American and what was known then as a WASP (white Anglo Saxon Protestant),” Pauline Mohr said. “We would all stand up there in a box (drawn on the floor) and explain our own point of view. We changed a lot of minds.”

When the Mohrs moved to Lake Forest, Pauline Mohr coupled raising five children with volunteering all over town. She said she used her teaching skills to offer Great Books courses to students at the then Gorton School as well as the School of St. Mary, Deer Path Middle School and schools in North Chicago.

Besides helping the WGA, Roger Mohr did not immerse himself into civic volunteerism until he retired from the advertising business in 1993.

“I was just a working stiff until 1993,” Roger Mohr said. “Pauline (Mohr) was the one doing stuff for the city.”

Roger Mohr was not just any working stiff. He joined Arthur Meyerhoff and Associates in 1956 while in graduate school at Northwestern University.

“I was almost out of money and only had what I got on the GI bill,” Roger Mohr said. “The dean called me in and said (Meyerhoff) needed somebody in radio production. I got the job.”

Roger Mohr said that during his 37 years at Meyerhoff, he eventually became president, the company was sold to BBDO Worldwide and he retired as its vice chairman-international of the Chicago office in 1993.

After retiring, Roger Mohr joined the Lake Forest Plan Commission and served three terms as an alderman as well as getting involved with Northwestern Medicine Lake Forest Hospital among other things.

The biggest testament to the Mohr’s life of service may be the paths their adult children have chosen to lead. Daughter Kathy Zerkle helps run a no-kill animal shelter in California; son Greg Mohr is a surveyor for the National Forest Service; and after working as an administrator for Doctors Without Borders and Project Hope, son Tom Mohr now runs a division of Family Health International in Myanmar. He specializes in fighting Tuberculosis. Sadly, their daughter Kristen Mohr died at 22 of natural causes. Their daughter Mary Mohr has found solid success in the business world.

“I never really thought of it that way,” Pauline Mohr said when asked about her children’s propensity for good works. “We always tried to keep them from getting too materialistic.”