A new nutritional app co-developed by Lake Bluff native Thomas Gorczynski has everyone asking for a piece of the pie, including Johns Hopkins University.

Words by Selena Fragassi and Photography by Robin Subar 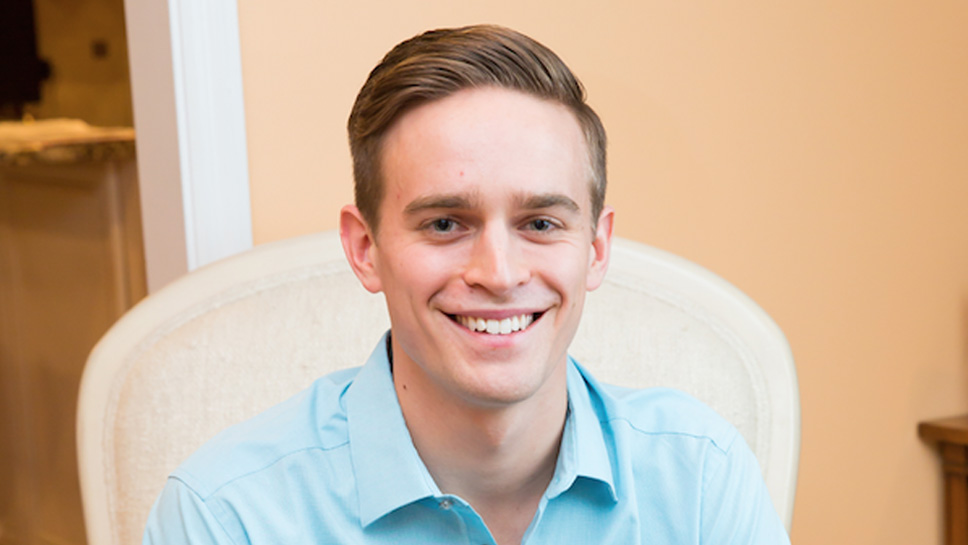 The joke “you are what you eat” has turned a lot more serious in recent years as diet has started to become more and more understood as a major player in the development of chronic diseases such as diabetes, cardiovascular complications, and a whole host of autoimmune disorders. It’s something Lake Bluff native Thomas Gorczynski and business partner Sean Crowe witnessed firsthand working alongside Johns Hopkins University last spring developing a new smartphone app called Nomful that promotes healthy living by providing continual access to personal nutrition coaches.

“It’s heartbreaking to see what people are going through with a lot of these chronic diseases, many times where the main reason is diet, and sometimes people don’t know that,” says Gorczynski. “So many times in the clinical space, the solution is just a pill, when really, if you change your diet, so much can be possible. Learning about that got me passionate.”

As classmates at Miami University of Ohio, Gorczynski and Crowe were attracted to the idea of getting involved in the everbustling startup scene upon graduating in 2014. They quickly came up with the idea for Nomful last spring. “I’ve always had a passion for leveraging technology in ways that can help people and make things more effective and affordable,” admits Gorczynski. “Sean and I wanted to build something meaningful.”

Together they pooled their business and engineering degrees to make an early prototype and wound up being accepted to the Dreamit Health accelerator program in Baltimore in 2015, which provided resources, connections, and financial investors such as Johns Hopkins and The Abell Foundation in exchange for equity. The program allowed Gorczynski and Crowe to fast track Nomful, which has turned into a full-time business operation for the pair and also recently launched in the iPhone app store.

While Nomful itself is free to download, users then need to choose from a 21-day healthy start package or a 12-week boot camp. Monthly maintenance options are available thereafter. (A free three-day trial is currently being offered.)

The motto is a “nutrition coach in your pocket”—it connects users with a dedicated coach who answers questions, sets goals, and holds the member accountable for what they eat. “As soon as someone signs up, the first thing that happens is they get an initial phone consultation with a personal nutrition coach to evaluate goals and see where they are starting from,” says Gorczynski.

Rather than relying on calorie counting or focusing on macronutrients that other apps already have the market on, “Nomful’s focus is on resetting bad habits and building new, healthy ones which can be more sustainable five years down the road,” says Gorczynski. For example, instead of logging endless food journals, Nomful relies on picture sharing to track meals and drinks that get submitted instantly to coaches. The app also offers instant messaging for real-time feedback and regular phone calls every two weeks. “There’s no robot,” says Gorczynski. “There is a real person on the other end of the line.”

He and Crowe rigorously interview every coach they bring on board. All have experience as registered dieticians and have varying specialties in weight-loss management, vegetarian eating, diabetes counseling, pre- and post-natal nutrition, and other areas “so you are matched with someone that is relevant to your situation,” says Gorczynski.

The result is a nutritional program “more effective than traditional consultation, more cost effective, and overall more engaging for a lot more individuals because you’re removing the physical barriers that once existed,” admits Gorczynski.

Recognition for Nomful has been steadily growing since the pair moved back to the Chicago area in July (Gorczynski now lives in Lakeview). “We’ve been building partnerships with different health clubs, boutique gyms, personal trainers, and studios who are working with people ready for change,” he says. That list includes Lake Bluff’s Focused Results and owner Zak Rivera, as well as The Dailey Method in Oak Park, and a number of Chicago studios. “We are also aggressively expanding in Baltimore, Philadelphia, Boston, and New York City,” says Gorczynski who has high hopes for where Nomful can eventually go.

“I want to see how many people we can help. There are so many people out there looking and not sure what to do when it comes to diet. From there, we want to get more involved in the fitness and wellness space, such as corporate wellness, which we have interest in already. Our first goal is to nail down what we can do on an individual level before we go bigger,” says Gorczynski. “This experience has been eye-opening as to what the power of food really is. Growing a healthy relationship with food can be fun, and it doesn’t have to be as complex as people sometimes make it out to be.”

Find out more at nomful.com.

From the January 2016 Issue of Forest & Bluff