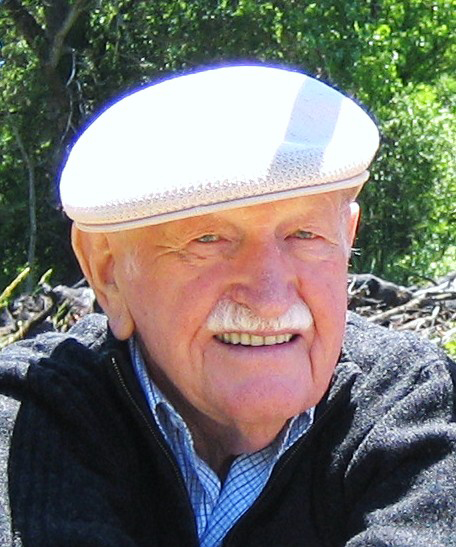 Karl Nagel, 103, longtime resident of Lake Forest, passed away peacefully on January 13, 2016. He was a true gentleman: kind, loving and wise.

He was born in Ingolstadt, Germany to Maria Barbara Kogel and Georg Friedrick Nagel on February 28, 1912, the 7th of 8 children. Karl lived his life to the fullest every day, with a twinkle in his eye and a song in his heart. As a young boy in Bavaria, he swam in the Danube River and hiked into the nearby forests with friends … and his Mandolin … always enjoying a good time. He loved watching Cowboy movies on Saturday and dreamed of going to America, someday.

After graduating from Lutherschule at 14, he studied Horticulture and served a three-year apprenticeship in a large conservatory in Berlin. There he learned the meaning of hard work and determination. At age 19, and aware of the unrest in Germany, he decided it was time to go to America and join his brother, Max, in Chicago.

When he arrived, he had two dollars in his pocket, no job and could not speak the language. He was about to live the American Dream. Karl answered an ad in a German newspaper for a manager of a commercial greenhouse in Lake Forest three days after his arrival. He got the job and also met his first wife, Cecilia Studeny, working as a cook next door. They worked as a couple for three years in homes in Lake Forest and Highland Park.

Always ready for a challenge, Karl eventually was encouraged to try carpentry. His first job was at Ft. Sheridan where German Prisoners of War were already arriving for detention. A year later, Karl was building his first home in Deerfield for his wife and two children … using bricks taken from the Highland Park section of Green Bay Road. Eventually, he purchased land in West Lake Forest next to the train station where he built his Millwork shop and a small home for his family.

Lake Forest Millwork grew and prospered and was soon known for its fine craftsmanship and fair dealings. Always a good neighbor, he crafted the front doors and an altar for the St. Patrick Catholic Church, which was across the street from the shop. In later years, he joined his son, Karl F. Nagel in the Construction business. Nagel and Nagel built many homes and developments in Lake Forest and Lake Bluff as well as apartments in Waukegan and Gurnee.

After his first wife died, Karl retired and spent time in his beloved gardens and on fishing trips with family and friends. At age 91 he married Joanne Gustafson, a neighbor and friend of many years. It was a very happy marriage, and they were together in their own home until his 100th birthday.

Karl expressed gratitude for his life and joys in everything he did. The love in his eyes told his story: He had lived the American Dream.

Editor’s note: This obituary was updated on Jan. 22 with additional information about Karl Nagel’s life, shared by his family.