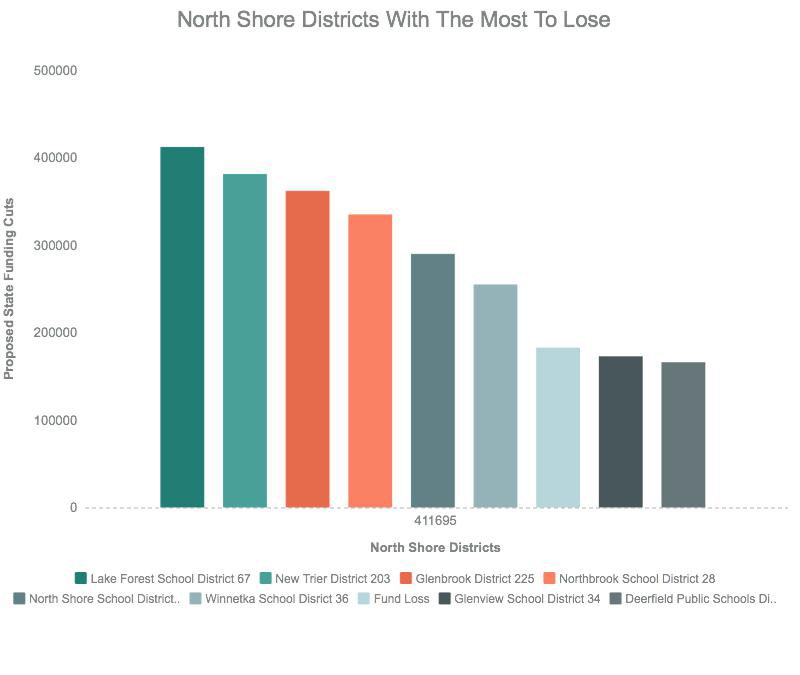 North Shore public schools will lose more than $3.7 million in state funding if the Illinois General Assembly approves a proposal by the Illinois State Board of Education to redistribute money.

The board wants to pluck $305 million statewide from a fund designated for special education and re-allocate it for general education, with wealthier districts like those on the North Shore getting less and poorer areas receiving more.

“Funding for children dollars are distributed to the rest of the state (outside of Chicago) using a formula based on a district’s average daily attendance and low-income student population,” said Amanda Simhauser, a public information officer for the board.

If the proposal is approved by the legislature, school districts in Wilmette, Winnetka, Glencoe, Northfield, Highland Park, Lake Forest, Lake Bluff, Bannockburn, Deerfield, Northbrook, Northfield and Glenview will lose $3,763,287 for the 2016-2017 term, according to information on the board’s website.

When pressed in an interview with Daily North Shore, Simhauser said the formula was based on the real estate values in individual school districts.

“We look at the wealth of the local school districts,” Simhauser said. “We take the EAV (equalized assessed value), the assumed tax rate and revenue from (corporate) personal property (replacement) tax.”

Michael Bregy, District 112 superintendent, criticized the idea saying it hurt the students most in need of help. He said the re-allocation harms the district at a time when the state board is already requiring it to spend money to upgrade its aging infrastructure.

“It’s reckless to be taking money away from our most vulnerable students afflicted with physical and emotional disturbances,” Bregy said. “It’s unsettling to know Springfield is moving money around in a shell game. That is reckless decision making.”

Northbrook School District 28 Superintendant Larry Hewitt, whose schools will lose $165,809, said he is not opposed to seeing more money go to poorer districts but he wants a formula that does not punish places like the North Shore.

“I am all for helping the impoverished districts,” Hewitt said. “I would support a hold harmless plan where our allocation remains flat and future money will be used to remedy the inequities in poor districts.”

Mike Riggle, the superintendent of Glenbrook High School District 225, which will be shorted $380,789, agrees with Hewitt’s idea of a freeze for the wealthier districts. He also said the state board should not remove special education money when it requires certain standards to be met for those students.

“The state is talking about a property tax freeze,” Riggle said. “If that happens we won’t have any way to recoup the money. We will have to look at what to cut but I don’t know what that will be.”

Simhauser said the proposal will be included in the board’s budget, which must be approved by the legislature. No bill has been introduced yet. She said it will be part of the state’s overall budget package for the fiscal year starting July 1.

State Sen. Julie Morrison (D-Deerfield) said she will watch the legislation closely. She is not happy with the proposed loss of money for special education.