When radio personality Erich “Mancow” Muller moved to Wilmette, to settle down to his own white-picket-fenced American dream home, he was apprehensive at first. “I thought it was going to be purgatory out here,” Muller—a city-dweller for nearly two decades—told the Chicago Tribune in November. He told the newspaper that it ended up being heaven.

But lately it had started to become something else entirely.

A few weeks after moving in, Muller had laid out a monogrammed towel on his bed. No one was home—at least, that’s what he thought—so it was a little alarming when he returned to his bedroom to find the towel had moved. Not much, but enough. He went away again, came back—and it had moved again. Now the monogrammed letter (an M) was laid straight up, as if in defiance.

Could it be that his five-bedroom, 4,635-square-foot Italian Renaissance-style house was . . . haunted?

“It’s not haunted, that’s ridiculous,” deflects Muller, after I said as much over breakfast at Fuel in Wilmette. “It’s not haunted—look, the fact is: any time you have these kind of things, the simplest explanation is the right explanation. I don’t believe in ghosts, first of all. But I do believe in spirits, which is a different thing.” 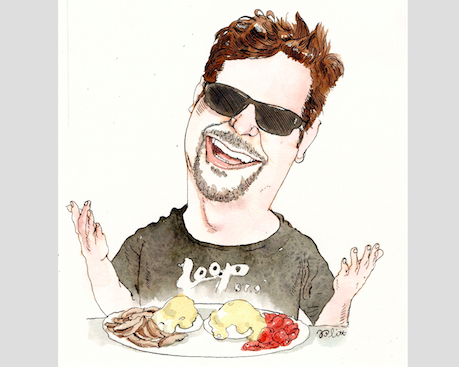 Muller is as passionate as they come: when he believes something, he believes it vehemently, fully, without question. (One notable exception is waterboarding: After saying repeatedly on-air that he didn’t believe it to be torture, Muller volunteered to undergo it himself and ended up reversing his previous claims.) And while that spirited, headstrong nature has brought him ratings and fans, it’s not without its fair share of controversy.

The waitress brings us our food; for Muller, a marinated roasted portabella drenched in hollandaise sauce. “Brother—looking at this, you realize you ordered wrong,” Muller tells me in his orotund voice; a voice that sounds even more imposing in person, but belies a good-natured humor.

One of the first times Muller found himself anywhere near his current residence, it was with Saturday Night Live funnyman Norm Macdonald and Chicago personality Billy Dec.

There they were: going to a comedy club to watch Macdonald’s standup—in Schaumburg. To his city friends, this was akin to setting off on a journey across a nuclear mutated landscape, a la The Hills Have Eyes. “Like these inbred country people of the suburbs are going to kill us!” Muller says, mocking the snobbery.

But the country is exactly where Muller was raised. He grew up in Kansas City—but on dirt roads outside the city. (“It’s like the difference between Joliet and Lincoln Park,” he adds for clarification.) A model and a child actor at nine years old, getting work in ads for Lee jeans and Wal-Mart, he expressed interest in the entertainment industry from a young age.

While attending the University of Central Missouri, Muller landed a job at KOKO-AM in Warrensburg, MO. There, he explored the outlandish radio characters that would make him famous. One—a half-man, half-cow who would unzip his pants to reveal udders—would end up sticking with his audience. They wanted more.

Muller was a mortal man no longer. The “Mancow” was born—a fast-talking, incorporeal beast that would spit fire at his enemies and lived on the radio waves.

He would court controversy early. At the San Francisco station KSOL, on “Wild 107”, Muller made national headlines with a publicity stunt that shut down westbound traffic on the Bay Bridge. He feuded with fellow shock-jock Howard Stern—with Stern bragging on-air the day Muller’s father died, berating him with claims that he would dig up his father’s grave and a slew of other offensive comments. Something Muller recounts in his memoir-ish book Dad, Dames, Demons, and a Dwarf: My Trip Down Freedom Road.

After working for almost three decades on the Chicago radio scene, Muller stepped away at the end of 2014. He had had enough. The early mornings waking up at 2:30 a.m. were adding up. He wanted to focus on his family, his wife and twin daughters. And he certainly didn’t want to become a shell of his former self—a charge he levels at old enemies Steve Dahl and Jonathon Brandmeier.

“They’re not even going through the motions—they don’t even phone it in,” says Muller. “They’re just lazy, old, miserable, cynical c***** and I didn’t want to become that.”

But when 97.9 FM “The Loop” came calling, the veteran shock-jock couldn’t resist. He now broadcasts his morning show—rechristened “The Mancow Show”—from the Merchandise Mart, the same suite he left in 2006 after becoming the target of numerous complaints for broadcast indecency. The culmination of which would lead to a $300,000 settlement with the Federal Communications Commission.

The world is a different place for the old guard of radio. Podcasts, YouTube, music streaming apps—all take a big chunk of the market of listeners. “The busboy here at this restaurant has a podcast, I’m sure,” says Muller. But radio is still about cultivating personal relationships.

If somebody calls now and they’re talking about a restaurant in Skokie—Muller gets it. He knows those places. ”So it’s a much deeper relationship,” he says. If his listeners ever have mischievous spirits in their house, well, he’ll know just what to tell them: He’s got a guy. Namely, a priest, who blessed the entire house. And save for the random nosey raccoon rummaging in the garage, nothing spooky has happened since.