The North Shore’s smallest town is named for an English village, based on an Englishman’s novel and located on farmland bought by a trader in soap, lard and oil.

Businessman Joseph Sears, who bought the original land—the Mahoney farm in Wilmette—founded Kenilworth, Illinois, with money he made from running a company that made and sold linseed oil, soap and lard. Sears, unrelated to Sears Roebuck Co., is Kenilworth’s forefather.

According to Kenilworth’s historical organization, Sears bought over 200 acres in 1889 for $150,300. When its population reached 300 residents, meeting the state’s requirement for incorporation, Kenilworth became the newest of the North Shore’s lakefront villages. 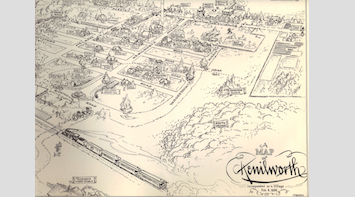 “Joseph Sears wanted to establish an ideal community,” said Melinda Kwedar, curator at the Kenilworth Historical Society. “He lived on Prairie Avenue with five kids—they had six but one died—and planned and developed a model community between Winnetka and Wilmette.”

Indeed he did. Sears had certain ideas about a proper village and who should be allowed to live there. For example, according to the historical society, Kenilworth’s streets were platted for better exposure to sunlight in each home. Utilities were placed underground. Alleys and fences were prohibited. Lots were large. Streets were paved. Sears, who believed in the Swedenborgian faith, held that a town should regard the family as the primary unit. So, he planned for the town to have a church and a school. He gave land for both.

Kenilworth’s creator had the vision, work ethic and money to make his dream come true, according to Michael H. Ebner, author of Creating Chicago’s North Shore, A Suburban History (University of Chicago Press, 1988).

“What I find interesting about Joseph Sears is that his business experience fed into an inspiration for Kenilworth,” Ebner said. “His father had been an entrepreneur who sold the N.K. Fairbanks Company before the Civil War, and Sears worked for the company from the bottom up until he proved his worth, not to his father, but to the new owner of the company.”

Ebner explained that the firm extracted oil from cotton for use as a lubricant, just as fellow North Shore industrialists, Lake Forest meat titans Louis Swift and Philip Armour, had done with pork byproducts.

But when the U.S. government targeted successful businesses for mandatory mergers in the name of antitrust—forcing what had been his father’s company out of existence—Sears felt persecuted. He saw the source of his father’s livelihood, where he had worked for years, earning his wealth, swallowed up by government control.

“After that, Sears decided to invest his money in unincorporated lakefront property in Wilmette on the south and in Winnetka on the north—17 miles from the Loop—and, inspired by an 1883 visit to the Warwickshire countryside in England and having read Sir Walter Scott’s novel Kenilworth, which provided Sears with a romanticized portrait of magnificent landscapes and human order, he made Kenilworth.”

As if to prove it, borrowing from the example of prominent Chicago industrialist George Pullman, who created the town of Pullman for his workers, Sears sought to create an upper class enclave, in pursuit of order amidst emergent uncertainties of post-antitrust America.

Sears had distinctive ideas about what constitutes a community, insisting that Kenilworth be restricted to white Protestants—Ebner said that Sears had ordained that Catholics, Jews and blacks be restricted from owning property in Kenilworth—which Ebner said was motivated by class consideration and nothing else.

“Lake Forest had its longstanding Roman Catholic community and, back to its beginnings, Glencoe had a significant African American population, but Kenilworth stands out in this regard because Sears mistakenly believed that he could promulgate a prescription for a homogeneous rather than a heterogeneous population.”

One of the sources of this, Ebner said, is Sears’ religion.

“I would call it a messianic religion, a heaven on earth set of circumstances that he envisioned for Kenilworth,” Ebner explained. “For instance, when he first laid Kenilworth out, he had in mind naming every street after an American man of letters, such as James Russell Lowell, Washington Irving and Nathaniel Hawthorne.”

With land annexed to Kenilworth in the early 20th century—including 40 acres in the southwest belonging to the North Shore Golf Club—the town grew to its current size of 0.6 of a square mile.

The September 18, 1966 murder of Percy’s twin daughter Valerie at their beachfront Kenilworth home—while the entire family and a dog was home—remains a hauntingly unsolved symbol of Kenilworth’s elusiveness. The young woman was bludgeoned to death in her bed before dawn.

This is Kenilworth’s most puzzling crime. Theories range from a mob hit and mayhem at the hands of a Kenilworth steel executive’s violent son to an early attack by Chicagoland’s anti-capitalist Unabomber. Whoever entered the Percys’ Kenilworth home on that autumn morning and went upstairs to kill the industrialist’s 21-year-old child during his Republican candidacy for the Senate was never caught, let alone tried and convicted.

The town’s worst murderer remains unpunished and, judging by public record, Kenilworth, forged to its founder’s vision of insular family, church and community, is uncurious.

It is in this way that the separateness of this solemn town created by industrialist Joseph Sears—on a former family farm where Mahoney Park is now—echoes its own eerie stillness.

Ebner sees this quality as integral to Kenilworth’s historical legacy. “In 1899, Kenilworth’s leaders attempted to thwart the laying of tracks for the North Shore Electric Railway,” he explained. “The other six North Shore communities had each given their consents. But this episode is emblematic of Kenilworth’s quest to retain its autonomy, thinking of itself as an island rather than linked to its interdependent metropolitan neighbors.”