Michael Bearwald has a sweet tooth. But he doesn’t just indulge it; he puts it to work—as owner of Bent Fork Bakery in Highwood, along with wife and co-owner Liz Bearwald.

We’re in Bent Fork before the holidays, and it looks like Santa’s workshop on steroids. Cookies are everywhere—in beautifully arranged baskets, mostly, but also on cookie sheets arranged around the bakery and in the back, which is wall-to-wall filled with antique toys and unique items. (Antique collecting is sort of a hobby for the Bearwalds, who also sell them out of a separate room in their bakery.) There are no elves to be found here—just a small, dedicated staff rolling dough and adding tinsel to baskets, which will be sent out to lucky families and corporate meetings all over the country. 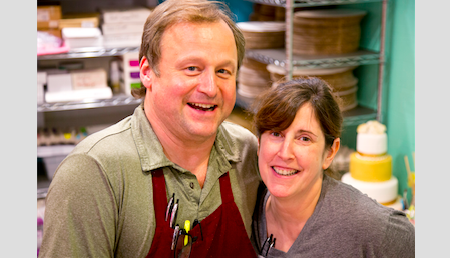 The Bearwalds have been making Christmas cookies for a long time, long before they ever opened the storefront on Sheridan and Waukegan Roads. In fact, the Bearwalds were the proprietors of a bakery in what is now Englewood in the 1920s. So baking is sort of in the blood.

One of the recipes that has been handed down through the ages comes from Michael’s grandfather, whose secretary made a delicious date nut bread around Christmas time. When Michael was a little boy, he would make the date nut bread in little orange juice cartons. Then, with an entrepreneurial spirit, he would go door to door during the holidays, selling the Christmas bread in his hometown of Northbrook.

The only thing that’s changed is that customers now come to him. And the recipe, thanks to careful tinkering by the Bearwalds— adding, among other things, flax seeds—has been rechristened “morning bread” in honor of the workers at the bakery who, I have to assume, eat it to start their mornings. How lucky!

Said Liz, “You got a recipe for our own, homemade staff bread. So there you go!”

And that sweet tooth of Michael’s? Its been carefully calibrated, and also gives the bakery its name. One of the couple’s friends gave it to them right before she passed away. They named it in her honor, as well as Michael’s, who always orders the “bent fork” dessert when they go out to dinner. Call it R&D. 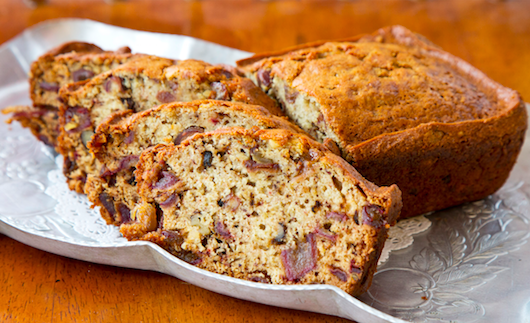 Preheat oven to 350. Using your Mixmaster, incorporate butter with sugar and mix until blended, then mix in eggs, vanilla and banana. In a separate bowl, pour boiling water over dates and add baking soda. Into the butter/sugar/egg bowl, add all dry ingredients, adding walnuts last. Mix together on medium low, then add dates and stir well. Pour into 2 8-9” loaf pans. Bake 45-55 minutes. Enjoy one now, and freeze the other!