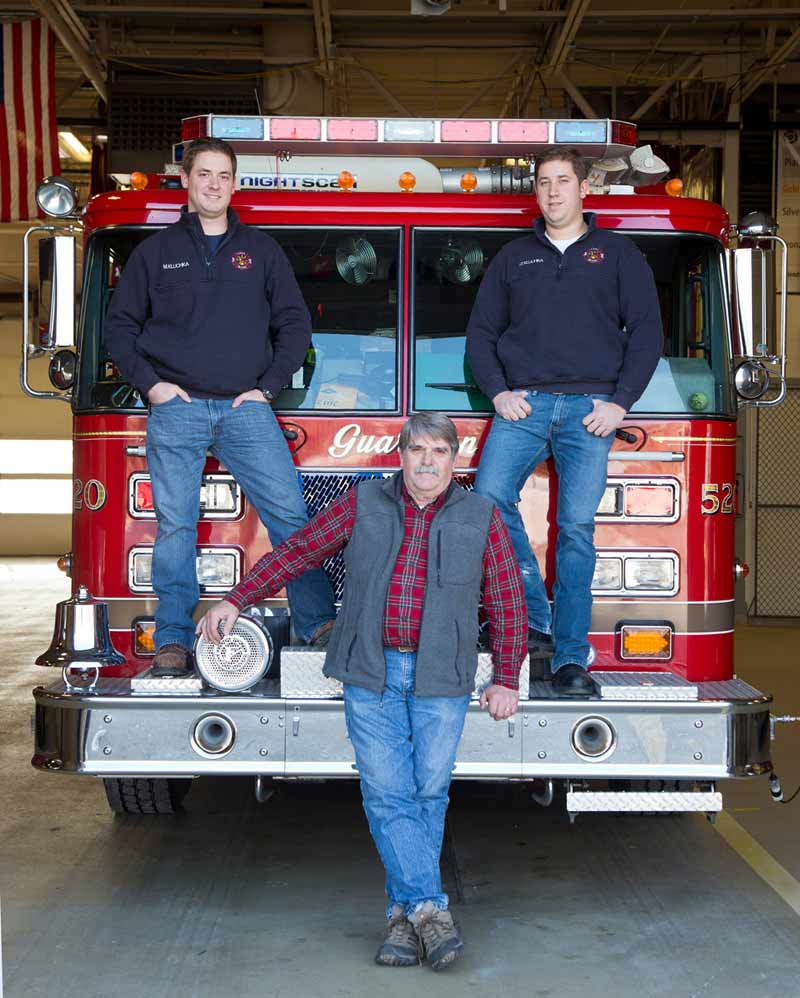 Lake Bluff resident and longtime volunteer firefighter Jerry Kluchka with two of his full-time firefighter sons, Matt Kluchka, (left) of the Lake Forest fire department and Tim Kluchka of the North Chicago fire department. (Their brother Russell is not in the picture.) Photography by Joel Lerner/JWC Media

LAKE FOREST/LAKE BLUFF — Firefighting is the family business for the Kluchkas of Lake Bluff though sometimes they may take different trucks from separate departments to the same blaze and on other occasions they travel together.

When Jerry Kluchka was honored during a Lake Bluff Village Board of Trustees meeting on Dec. 14 for 30 years of service to the Lake Bluff Fire Department, his three firefighter sons were there to share the honor with him.

Lake Bluff’s department consists entirely of volunteers, and all four of Kluchkas serve in their hometown. They said when a call goes out to multiple towns, they head to the blaze but not always from the same place.

“It’s definitely interesting,” Russell Kluchka said. “One time there was a fire in Lake Forest, I got there from Highwood and we all saw each other. People give us a hard time. They say ‘it’s you again.’ It’s fun seeing each other but we just do the job and go home.”

There have been times two or more of the Kluchkas were at the Lake Bluff Fire Station and they get a call to assist in Lake Forest, North Chicago or Highwood, according to Jerry Kluchka. He said the prevailing rule for them is the fastest way to get to the fire — but there can be complications.

“If I’m coming from Highland Park I may jump on in Lake Bluff,” Tim Kluchka said. “I still get to the fire in North Chicago (but) I’m there faster.”

“If there are seven guys there who can jump on the rig (in Lake Bluff) I won’t push one of them off,” Matt Kluchka said. “I’ll go to Lake Forest and either go if it’s upgraded or cover things there.”

Jerry Kluchka, who has lived in Lake Bluff since elementary school, joined the department just before Tim was born. He said he had a strong mechanical background and was working in his wife’s family’s construction business, G W Mahler & Son. He also spent plenty of time around the firehouse.

“I had friends whose fathers were firemen,” Kluchka said. “We got to go inside the fire station when I was a little guy. In Lake Bluff they blew the siren to call the volunteers. We lived nearby and ran down to the station to see the fire trucks leave.”

Using his mechanical skills, Jerry Kluchka started volunteering. He said he worked on the equipment and it was not long before he was a fully fledged firefighter. As his family started to grow, the next generation of Kluchka men hung around their firehouse like their father did as a youth.

“It was table talk for us,” Tim Kluchka said. “All of us were interested. We like the stories. We like to hear what the dinosaur days were about.”

When Jerry Kluchka started fighting fires he said people would hang on to the outside of the trucks and use heavy air packs when entering a burning building. He said when his sons go to a blaze, they all ride in an enclosed cab and the air packs are much lighter.

“It gives us more energy to fight the fire,” Matt Kluchka said. 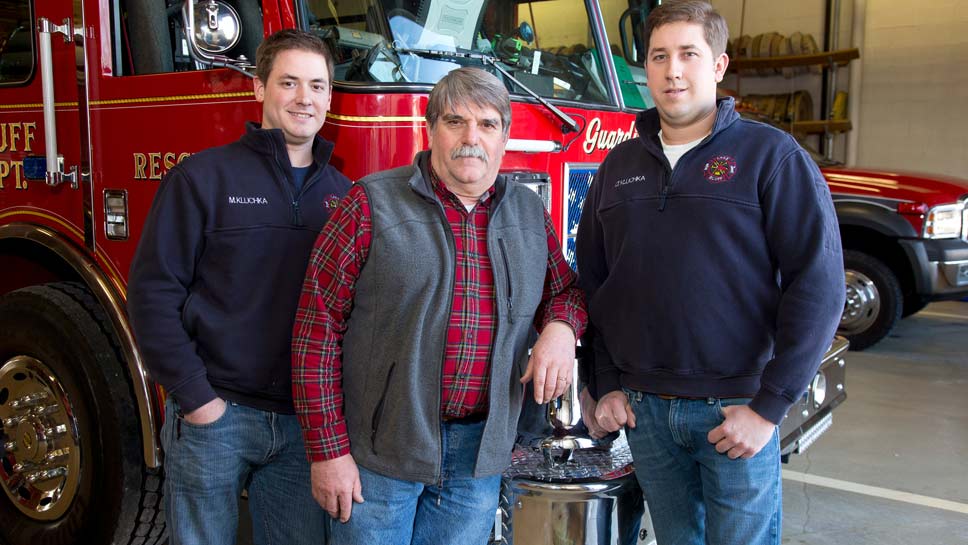 All four men are paramedics. Tim, Matt and Russell said they all took EMT (emergency medical training) courses while in high school and were volunteering in their teens. There were times classes gave way to lifesaving.

“There were times I ditched school to go on an ambulance call,” Tim Kluchka said. “I’d come in for the last periods (of the day) and got some looks.”

“My wife got some calls about that,” Jerry Kluchka added.

Though the younger generation of Kluchkas are full-time firemen, Jerry Kluchka is a volunteer and has to find another way to earn his living. He said that became critical when the economy went in the wrong direction nine years ago and that he did not see a future in construction.

The business still had a major asset, real estate on Highway 41 just north of town, which once housed G W Mahler, according to Jerry Kluchka. He and his family turned it into the Hot Shot Ice Arena and it became his full-time occupation along with his wife and the boys’ mother, Becky Kluchka. For the sons, the ice rink is a part-time job.

Matt Kluchka said he had two career dreams as a teen, playing professional hockey and joining a fire department.

“I’m not playing hockey,” he said.

But that’s OK. He said that even if the Chicago Blackhawks offered him a contract today he is not certain he would leave the Lake Forest department for the NHL.

“If I could play for them for five years or so I’m not sure what I would do,” Matt Kluchka said. “I’d be making more money but there are more important things.”

All four agreed saving a life was at the top of that list.