“The thing I really love about Cora is that she can embrace the protocol, the parties, the menus, the servants, the grandeur, but she could also walk away from it without batting an eye. She loves it but it’s not essential to her, she doesn’t need it,” explains Elizabeth McGovern at the London launch of the final series of Downton Abbey.

McGovern is discussing the impending downsizing of Downton and the inevitable repercussions on the pampered aristocrats that reside there as the hit series comes to a climax. “I think, to a certain extent, Cora is naïve about what it will be like to live with no money, but she’s very happy to embrace the idea of having absolutely nothing, because she’s never experienced what that is. So, I don’t think she’s particularly stressed about the changes. She can roll with the punches,” smiles McGovern.

Lady Cora’s looming lifestyle change aside, the same could be said for the actress herself, who, despite finding huge success both at home and the UK, isn’t fazed one bit by the announcement that the upcoming sixth series will be the last. “I’m ready to put Cora to bed for a while, I really am. I tried my best to bring her to life for six years but I’m looking forward to doing the same now for somebody else.”

With her flawless complexion, incredible cheekbones, and regal air, it’s hard to believe McGovern’s 54 years; her beauty is timeless and no doubt part of the reason she was chosen to play Lady of the house Cora Crawley back in 2010, when Downton began. A woman of grandeur and matriarch-in-waiting to the fearsome Dowager Countess, played impeccably by Maggie Smith, Cora is also the most ‘real’ person amongst the Crawley characters; unafraid to cross the boundaries between master and servant, a woman not constrained by the usual trappings of English, post Edwardian society. 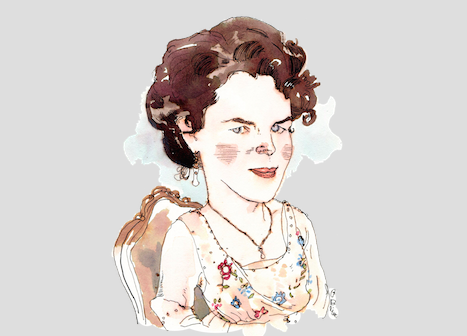 She is also the only American in the aristocratic Downton household; born and bred in the city of Evanston, McGovern’s family moved to Los Angeles when she was 10. While admitting she feels shaped by Los Angeles as much as Illinois, she still has very fond memories of her birthplace. “It was an absolutely brilliant place to grow up. Evanston is one of the great American cities; it’s got a lot of the culture that New York offers and not so much of the angst, because there’s more space. The Midwest tends to be more open and accepting, there’s a lot of music, a lot of theatre, it’s a great culture, and a beautiful city. The people are just more accepting and nice,” she says with characteristic warmth.

During Downton’s five years on our screens, we’ve watched the lords and ladies— and their staff—go through many highs and lows, both private and intensely personal. The series spans a significant time period in British history, beginning on the day after the sinking of The HMS Titanic in 1912 right through to the frivolous yet austere roaring 20’s. Lady Grantham endured a significant amount of the heartbreak, losing beloved son-in-law Mathew in a car crash and her daughter Sybil during childbirth. Surprisingly, these are the storylines McGovern relished playing.

“I thought the writing really got across the impact of the sudden death of Sybil on Cora and Robert’s relationship. It was really great writing because it wasn’t just generic grief,” she says. “Julian (Fellowes, show creator) really addressed the specific impact of grief on specific relationships and the kind of fallout that often occurs from a child’s death, the different stages of grief and forgiveness. I thought that it was done in an interesting way and I loved playing that.”

However, one aspect of Downton McGovern admits she won’t miss is the drawn out process synonymous with creating such a huge production: “The biggest challenge to surviving Downton Abbey would be surviving the tedium. It’s always the same on any TV show—it’s a slow, laborious process that actually has not changed that much since film began. I mean, it’s gotten a little bit more streamlined but you still do shot after shot and it’s still laborious, no matter how ahead of time we are technologically! So, you name it, I’ve tried everything—from reading books to joking around with people, listening to music on earphones, playing games. You just have to get a process.”

Now based in London with her husband, British filmmaker Simon Curtis, and two daughters, McGovern says that while she has a couple of projects in development, her main focus will be on her family and her other passion, music. “I’ve got plans to record some new songs with my band but that will be quite low-key and I’m looking forward to some quiet time. Not leaving the house, hanging out with my kids!” she smiles. McGovern is the lead singer and guitarist in the folk-rock band Sadie and the Hotheads. When not on screen in those period costumes, she can be found rocking out on stage to a unique blend of 60’s pop-tinged country. What Lady Grantham would make of her rock star alter ego, we’ll never know.

Over the last six years, Downton Abbey has become a worldwide phenomenon. The Crawleys have fallen in love, fought in The Great War, and in Lady Grantham’s case, hosted the kind of epic and decadent parties that are now an echo of a more glamorous age. One thing’s for sure, there will be gap in our TV schedules and our hearts once the final series wraps.

What does Elizabeth McGovern think about the rumoured movie of the series? “I really don’t know; I can’t say,” she insists. “At the moment, I’m very happy to take a break from it.” But of course, Downton Abbey simply couldn’t survive without the lady of the house.