Frank D’Angelo had never been treated like the Pope before. So it was altogether surprising when the general manager of Tuscany in Wheeling was treated like one in Lyon, France; people—friends of friends—came to meet him “because they thought we were important,” he said. He chuckled, recounting the memory fondly.

They had found out through the grapevine that they were from Wheeling, and needed to see for themselves, he explained.

What was once known as one of America’s finest restaurants, Le Francias was the brainchild of Jean Banchet, a larger-than-life figure in the kitchens and minds of a whole generation of American chefs. Born in Roanne, France (a small town near Lyon), the eccentric Banchet loved to ride motorcycles and had a knack at playing cards. He also affixed what would be a lightning rod for the restaurant industry in Wheeling, attracting the most electric and eclectic restaurants as a result: the collection of which on Milwaukee Ave being known to this day as Restaurant Row.

Which is why Wheeling’s Taste of the Town is such a big deal. A little over a month ago, restaurants from all over the town descended on the Westin Chicago North Shore to show off their plates, bites, dishes, and hor d’oeuvres to a salivating crowd of lucky guests. This year, close to 1,000 attendees and over 20 local restaurants mingled in the Westin’s spacious Ravinia Ballroom.

“The chamber has been real supportive to the restaurant community in Wheeling,” said D’Angelo, who would be addressing the crowd at 5:30 p.m. “Wheeling is like a small big town . . . Restaurant Row has some world-class restaurants: we have Bob Chinn’s Crab House, [Tuscany], RAM [Restaurant & Brewery], and many of the restaurants that are represented here tonight.”

of the Westin. Serving seasonal bisques off their banquet menu, the chefs ended up being a big hit with the attendees, who kept coming back for more of their different colored creamy vegetable soups.

“Some variations may require tweaking here and there with different steps and cooking methods but they all have the same basic base ingredients,” said Menteer. “One thing to keep in mind is that the vegetable needs to be cooked for quite some time in order to have a nice velvety consistency.” He added: “If the veggies are not cooked long enough, your soup will be grainy.” 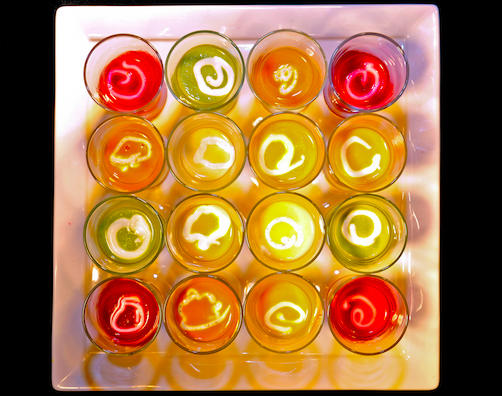 Sauté carrots, onion, ginger, and garlic until vegetables start sweating and onions are translucent. Pour in carrot juice to cover. Bring to a boil, put in veggie base and simmer until carrots are fork-tender well done, to the point of falling apart. Add heavy cream at this point and cook about 10 more minutes.

Puree using a stick blender. Add a couple tablespoons of lemon juice and some salt and pepper to taste. Serve with a dollop of sour cream.