It’s a Thursday evening in Evanston and Bluestone regulars are flocking to the eatery’s outdoor seats.

“If you didn’t love fall in Evanston before, what about this?” asks WGN Radio’s mid-day host Bill Leff of this unseasonably warm day. An Evanstonian for nearly 25 years, Leff knows of what he speaks.

“I grew up in Oak Forest. Even though it only takes 45 minutes to get there, it feels like it’s a million miles away,” he says. “I used to be mad at my parents that they knew about Evanston and kept it from us.”

Making sure his children—twins Kiley and Reese—don’t accuse him of the same thing some day, he and his wife Teri have built a life in Evanston. “On any given night, there are about 15 restaurants where we might choose to have dinner,” says Leff enjoying a club soda, straight up. “My wife is a terrible cook. If she sees this in print, she’ll initial that. So we eat out a lot. At a place like Bluestone, we almost always run into a few friends.” 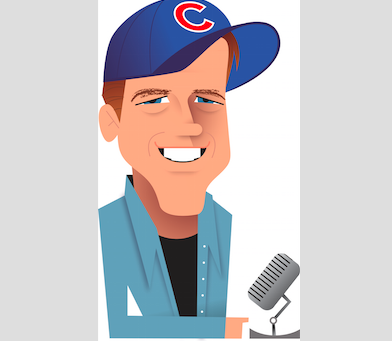 One of the job hazards of working on one of Chicago’s most popular radio programs with long-time colleague and radio veteran Wendy Snyder is that everyone feels as if they are one of Leff’s friends. “It’s really funny. When we’re on the air, we’re just talking and people who listen to us regularly hang on to the smallest details. Sometimes it shocks me.”

Leff began his career in entertainment as a standup comic and did this successfully for more than 10 years. It wasn’t until he and his wife decided to have a family that he began to look for a something that would keep him home. “I got to be friends with Danny Bonaduce who at the time had a show on The Loop. I was on with him almost every Friday. One day he asked me how things were going. I told him great, but that my wife and I were hoping to have kids and I didn’t think doing standup would let me be involved with my kids the way I wanted to be. So he said, ‘Why don’t you get a radio show?’ You don’t just go and get a radio show. So, he said he’d set it up for me. I really thought that was the end of it. But three weeks later, the guys who ran The Loop called and said ‘you want to do this?’ They were looking for a partner for Wendy and I thought, what do I have to lose?”

The rest is history—or a rather a storied career in one of the top radio markets in the country where this dynamic duo has been reunited for a four-hour show every weekday, by the same team that originally paired them at The Loop 20 years ago.

“Wendy and I couldn’t be more different. We have the same sense of humor, but almost everything else is different. She has said this—so it must be true—that she’s the more hard-edged, masculine of the two of us. I’m the softer, gentler one,” he says.

Leff and Snyder tend to plan six to seven hours of material for each of their four-hour shows, often having to play the “hot hand” dealt to them from the headlines of that particular day. “Sometimes you hit radio gold—like today I found this list of ‘Hollywood abnormalities’—actors and actresses who have something funny wrong with them. Those kind of lists never fail. It’s hard to believe that this is a legitimate job.”

Leff’s good fortune isn’t lost on him at all—quick to offer a compliment or to make time for a charity tennis match (the only thing that Leff might leave radio for would be a chance to be a professional tennis player—he loves tennis that much!). One of his favorite radio memories was having the chance to interview someone he had idolized since his childhood, Dick van Dyke. “It was the coolest thing in the world to talk with Dick,” says Leff of the star who just turned 90 years old. “I even made him laugh a couple of times. I made Dick van Dyke laugh. It really doesn’t get any better than that.”