Sometimes when I walk into a restaurant and greet the owners, pulling up a chair across from them at a table and tasting their cuisine, their world—I can’t help but walk away feeling like I’ve been inside someone’s home. It’s the intimacy inherent in food: its preparation and serving, nourishment and identity. It’s the camaraderie, too. It’s what Michael Pollan describes so well in “In Defense of Food: An Eater’s Manifesto” when he writes (or, really, implores): “shake the hand that feeds you.”

I got that feeling again the other day sitting at Mizuki Grill. We had just shaken hands with the owners, Joe and Nami Choi. On the always-busy Central Ave in Highland Park, the Japanese restaurant is, unfortunately, not prominently displayed, being inside the brick Highland Park Mall. Which is a shame, because diners can certainly miss it—and they would be missing out on some of the best Japanese food on the North Shore. 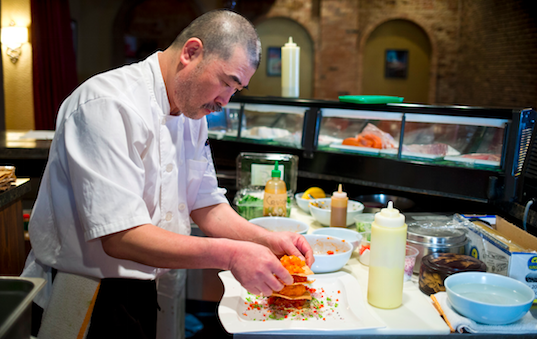 In what was once Las Palmas Restaurant & Bar, the couple told their story to a group of friends seated at a table. As Nami talked with animated gusto, Joe was behind the sushi bar preparing our meal: tuna and salmon tartar. Every so often a series of thump, thump, thump, thump would penetrate the conversation; the sound of a sushi chef hard at work.

“We’re very creative, very proud of our food,” said Nami as we enjoyed the first course, a spicy tuna roll that was stacked two rolls high, one roll on top of the other. “I think he has something talented in his hands,” she added, comparing her husband’s fluid hand motions slicing with a knife to that of a dancer.

The couple has been working together for over 30 years. They first met in Seoul (Nami is Korean). Joe, who was born in Osaka, Japan, is of mixed descent: his mother was Japanese, his father Korean. His earliest years were split between kitchens: his mother had seven sisters, and all of whom were in some way connected to the restaurant business. One owned a French restaurant, another a sushi restaurant, and so on.

He first came to the US in 1981; the very next day he was working in a kitchen. Settling in Minneapolis where his sister was already living, he worked as a hibachi chef for Samurai of Japan, a chain of restaurants similar to Benihana. “Of course, I had to get used to it, because Japan not like that,” said Joe. He had just prepared his last dish—wiped off his knife and took a seat at the table. In just six months, he was traveling around the US, training other hibachi chefs at different locations.

Arranged around Mizuki Grill are pictures of lavish looking dishes, and these are the creations of Joe, who, along with Nami (who followed her husband to the US four years later) have opened a total of seven restaurants around Chicago. Three of which (Fuji Ya, Kegon Northbrook, Bistro Nami) are still open today.

I bit into the tuna and salmon tartar put before us and experienced an explosion of texture and taste. The fish was impossibly fresh (the Chois do not use any frozen fish). They also prepare all of their sauces in-house, and Nami said it takes two or three days alone to make their unagi sauce—typically a combination of sweet rice wine and soy sauce that’s paired with teriyaki dishes and sushi.

“Everybody nowadays buy it,” explained Nami speaking of other Japanese and sushi restaurants, “but I cannot eat that.”

Which is why the prices are a littler higher here, because the quality is what consumers expect when going to eat sushi nowadays: possibly even higher than what their expectations should be. Echoed Joe: “You can’t cheat tongue.” 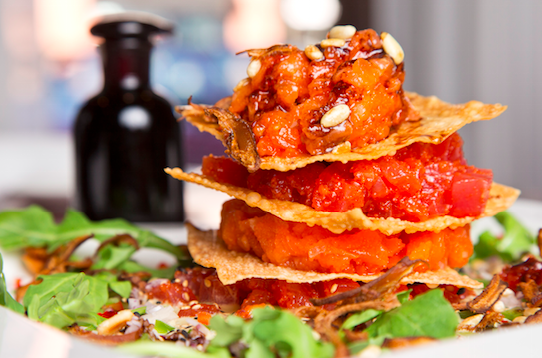 6 wanton skins (rectangular or round)