Nicki Milin thinks Popeye had a brain injury. The telltale signs are all there. The cartoon sailor’s iconic squint and fixed scowl. The way he talked. (“I yam what I yam.”) The way he ate his leafy greens with only one side of his mouth.

Could the lumbering Bluto have knocked him one too many times in the head? Or was it internal—say, a brain bleed—out on the high seas without the care of a certified specialist at hand?

If so it could not have been any worse than Milin’s own experience. Milin, who is no stranger to brain bleeds, never thought she would ever need brain surgery until she suddenly could not stop the world from crashing down around her. Or what she refers to as her “tsunami moment.”

Milin is seated across the table from me at Country Kitchen in Highland Park. The former real estate agent is enjoying an iced tea and egg white veggie omelet. Milin is an avid Uber rider. (She has trouble driving.) Today she is wearing a piece of soft tape over her left eye—or her “bad eye,” as she refers to it. She has gotten facial reconstruction surgery to be able to use more of the left side, but its unclear if she will ever be able to use most of it again.

And yet she didn’t have a stroke. It was something much more malicious. Milin was 51 when she woke up to find her whole bedroom spinning.

She reached for something to hold on to, grabbing the bottom of her bed to steady herself in this whirlwind. But still the room spun, and spun, and spun. Her heart was pounding. All she could feel was her head, which ached. When the room eventually stopped spinning, she noticed she had double vision. She thought to herself, I’m dying. Her second thought followed: I can’t die, she told herself, because I told my dad I’d take care of him. And then it went right back to spinning. 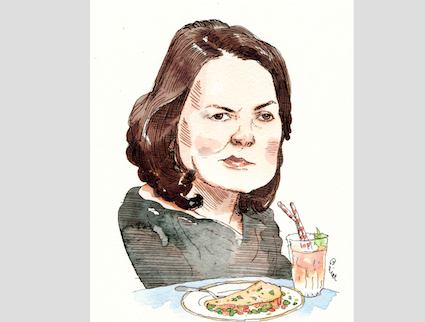 Afterwards, she realized she could only see out of one eye. She had never been to a neurologist before. But when she eventually went, she was misdiagnosed. “They should’ve known right away what it was,” she tells me. When she went to another doctor for a second opinion, he told her: “You need to see a neural ophthalmologist, stat.”

When she was given a magnetic resonance imaging (MRI) scan, the nurses had to drug her because she could no longer lay flat, due to the intensity of the vertigo. Since she was a young girl she had always had some degree of vertigo, dizzy spells. She steered clear of carousels. But it wasn’t until this moment, practically her entire adult life, when she found out what, exactly, it was that she suffered from. There it was, right there, clear as day: she had a cavernous angioma on her brainstem. “The motherboard,” explains Milin.

Raspberry-shaped abnormal blood vessels in the brain or spine, brainstem cavernous angiomas have only recently received a great deal of attention due to enhanced imaging techniques and the realization that even small hemorrhagic events can cause significant neurological deficits. Estimated to occur in approximately one out of every 500-600 people, or 0.2% of the general population, the root cause is still not yet understood.

That was the information Milin was given. It was imperative that she received brain surgery, though she had to wait five years (!) for surgeons at Stanford University’s School of Medicine Brain Tumor Center to operate. She had seen the MRI results herself. Her doctor “showed me (but I couldn’t see) that it had bled many times over the years and it was a miracle I had survived,” said Milin. “Most people when they have one they drop dead and they die.”

It is believed that Olympian Florence Griffith Joyner died from a similar cause. The same for composer George Gershwin. Both were not yet 40 years old. Milin, miraculously, had survived. She attended the Rehabilitation Institute of Chicago, one of the best in the world, where she had to learn to walk again. They tested her brain. She relearned the basic skills necessary to function.

“Because I was given the gift of life, I decided that my mission now is to help educate people,” explained Milin. To that end she has started a blog, “Got Brain Bleed?” Where she uses her sense of humor and amazing will to instill positivity in others. “Now I know I’m a fighter and I’m strong, and sometimes when you’re at the end of your rope,” writes Milin in one of her blog posts, “you just have to tie a knot and hold on.”

She has taken extensive notes about her experience, which she hopes to one day turn into a book. When she goes to the doctor’s office, she signs in as Mrs. Magoo. Because she has an indomitable will, she won’t let this beat her down—too much. But she credits her family and her good nature for seeing it through. Says Milin, “If I didn’t have a sense of humor, I couldn’t survive.”