People stopping by The Alley & Highwood Lanes expecting to bowl are going to be sorely out of luck. But that’s not such a bad thing, as the space on 210 Green Bay Road has been rechristened, remodeled, and updated to meet the demands of a changing culinary landscape—in Highwood and beyond.

With the help of some close friends they set it up, “blending the simplicity of the open space and the stained plywood floors with the lighting and other elements that give it that shabby chic look,” noted Goldstein. They picked up a lot of “mix-matched, vintagey looking tables and chairs” from a restaurant that was closing in Chicago. They picked up a couple dining room sets, and picked up more modern looking furniture.

“We’re kind of implementing our own style,” added Goldstein. That included a name change, 210 Restaurant, which gave it a modern-sounding name to boot.

Goldstein has been investing in Highwood since 2001. For about as long he was owner of The Alley & Highwood Lanes. But his reimagining of the space was given new life when he recently brought on co-owner chef Jeff Tomchek onboard. 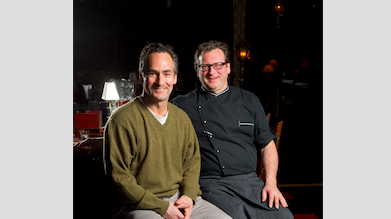 “It just wasn’t working and we wanted to make a change and we were looking for someone like him to bring the food to the next level,” said Goldstein.

Tomchek has been all over the continental United States and the world, refining his cuisine that is on full display at 210. With a focus on local farmers and ingredients, 210 serves regional American BBQ from smoked chicken, ribs, beef brisket (“done with post oak like they do in Texas,” added Tomcheck), and pulled pork Carolina-style.

The official unveiling was the night before Thanksgiving, and 210 had around 500 people come through their doors to enjoy the food and relish the live music onstage. To that end, 210 is looking for local bands that have rehearsed and polished acts. On Fridays and Saturdays, they will be featuring rock or funk—“something that’s danceable.” While Sundays are reserved for blues, the rest of the week is open to a medley of jazz bands, folk, and bluegrass groups.

“The easiest way to conceptualize what we’re doing is: supper club from five o’clock to nine o’clock, transitions into more nightlife, late night, live music lounge bar,” said Goldstein. But no matter what time it might be, Tomchek noted that this roast beet salad was a new favorite. 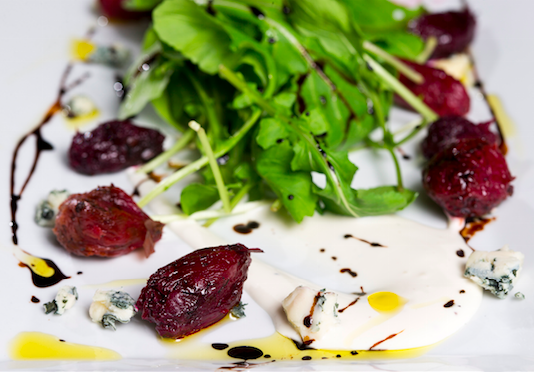 A grind of fresh black pepper

A pinch of Himalayan pink salt