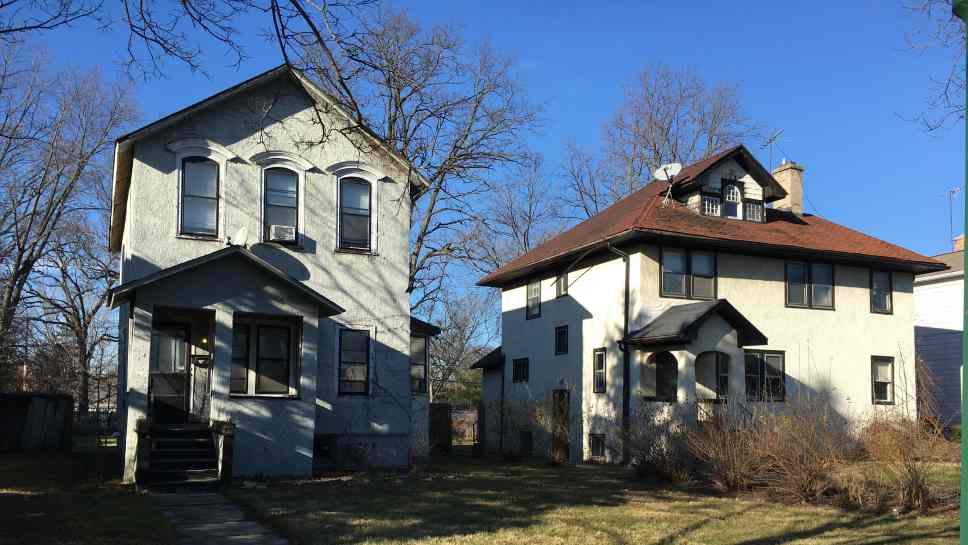 WILMETTE – The future remains uncertain for 1314-1318 Wilmette Avenue, a single lot where two older homes currently sit, but where yet another developer seeks to build townhouses on the lot. At the meeting on Dec. 2, the Wilmette Zoning Board of Appeals voted 6-1 against the developer’s application for a special use permit and zoning variances.

The story behind this property dates to 2007 before The Great Recession took hold. At that time, the Village Board approved combining two lots for the development of seven townhouses. But that project was never even begun due to the financial downturn and its effects on the housing market. In early 2015, developer 1314-1318 Wilmette LLC sought approval for that same development, which was turned down by the Village Board.

Now a third application is being brought by the Gambacorta Family Limited Partnership seeking approval of a scaled back development that includes two side-facing buildings, one in the front of the lot with two townhouse units, and one in the rear of the lot with three units. Each of the proposed units include three bedrooms and a two-car garage, with primary access on Wilmette Avenue and a total of five additional guest parking spaces.

“[The applicant] set about to design a project that it felt was more in keeping with the neighborhood, less intense, less, aggressive, than the prior application proposed,” attorney for the applicant Hal Francke, told the Zoning Board.

The Gambacorta Family also owns the property directly to the east of 1314-1318 Wilmette Avenue. The lot was purchased after the previous developer’s application was rejected.

“So what our client tried to do after the last application was to address a lot of the concerns that were raised by the community and by the Zoning Board,” Francke said.

For example, the proposed plan provides a gap between the two buildings to minimize the impact on the property to the west. The plan also directs the majority of ingress and egress to Wilmette Avenue, since neighbors had previously complained about the impact on the alley.

But at the meeting numerous neighbors objected to the new plan, finding it too dense for the size of the lot and the neighborhood. “This is far too dense of a proposal for the primarily single family residents that surround it,” Wilmette resident Rich Jones said.

“It has got too many buildings and too many units,” Judy Goody objected.

Other residents raised concerns about traffic on Wilmette Avenue, which is already congested. “The alley is for vehicles and that is why we have alleys,” Goody said.

Ultimately, the Zoning Board of Appeals voted against the development noting that the Gambarcorta Family failed to demonstrate a hardship for the special use permit, which must be shown to allow two buildings on one lot.

“They have not convinced me that it is a hardship to build four instead of five [units],” said board member Reinhard Schneider.

Board member Lynnn Norman agreed that the developer failed to establish a hardship, further noting the negative impact on Wilmette Avenue. “Ingress and egress onto Wilmette Avenue is just going to be disastrous,” she said.