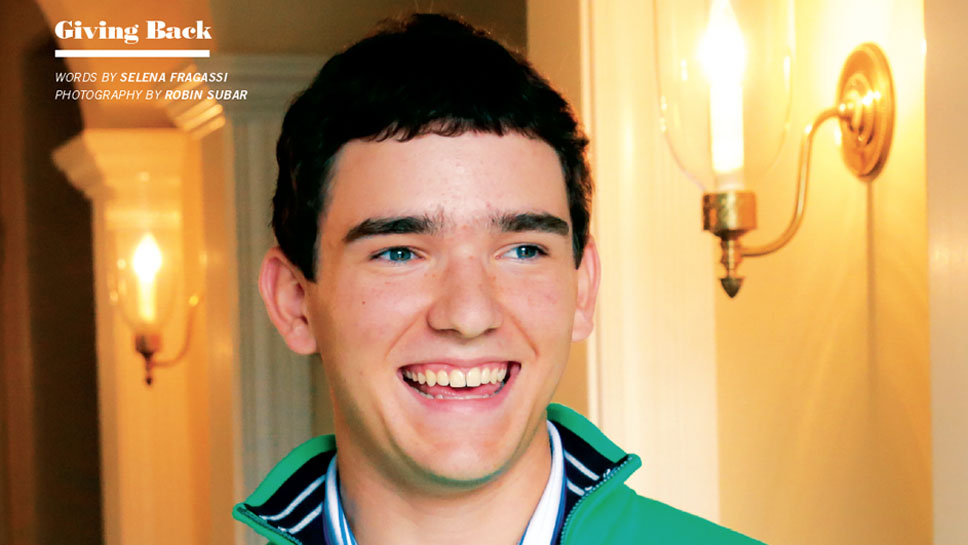 For Tommy Lacher, the greatest gift of all would be a cure for diabetes

Having Type 1 Diabetes is a lifelong journey, one that often comes with a lot of uphill battles. It’s the reason why Tommy Lacher has taken great strides to participate in the Juvenile Diabetes Research Foundation (JDRF)’s annual One Walk for a cure and also why he stepped up to race in the Chicago Marathon this past fall to raise further funding. Lacher, just 16 years old, has been living with the disease for three years, but he’s not content to let it be his finish line.

“I want to do all I can to help cure Type 1 Diabetes,” the Lake Forest teenager admits. So, in between classwork at Mundelein’s Carmel Catholic High School and meets with the school’s varsity golf and track teams, Lacher commits his time to volunteer work with the JDRF. That includes the annual fundraising walks, gala events, and, this past July, the chance to be a delegate for the JDRF’s 2015 Children’s Congress, which spent three days in Washington, D.C. lobbying representatives about new legislation that could help those affected by the disease.

Lacher was one of 150 children, ages 4-17, chosen from a pool of 1,800 applicants. “While we were there, we were educated on the legal parts of legislation that we were lobbying and then had an actual day of going to Capitol Hill to speak to members of Congress from our districts and tell them our stories so they could understand how it affects our lives,” Lacher says. For Lacher that meant sharing the story of his entire family. “My dad has had Type 1 Diabetes for 25 years and my brother was diagnosed nine years ago, so my entire life I’ve lived around it, the constant needle pricks, pumping of insulin, and all of the side effects that come from having mismanaged blood sugars,” he says. “It’s a real challenge 24 hours, 7 days a week. You can’t ever take a rest from it.”

It’s why he was so passionate about what the Children’s Congress was fighting for—specifically the Medicare CGM Access Act, which could change the way Medicare and traditional insurance companies begin to cover CGMs, or continuous glucose monitors that automatically test blood sugar levels, leading to greater control over the disease. Though Congress hadn’t voted on the measure as of press time, Lacher says, “There have been a few dozen senators and more than 100 representatives that co-sponsored the bill after our trip to D C., so that’s a lot of progress.” Before their trip, Congress also moved to renew the Special Diabetes Program for two years, which provides $150 million per year towards research into Type 1 Diabetes, something that Lacher says is “encouraging for future technology and treatments.”

For a 16-year-old, Lacher is extremely well read on the subject matter and up-to-date on the latest developments, which he credits to both his doctor teams and his family, who he estimates has raised close to $100,000 for the JDRF over the years, most notably at the annual One Dream Gala, which returns to Arie Crown Theatre December 12 with live and silent auctions and a special performance by REO Speedwagon.

“I also watch for different press releases to see what kind of advancements they are making,” he says, speaking enthusiastically about the possibility of an artificial pancreas coming to market in 2017. Currently undergoing clinical trials, “it’s an insulin pump and CGM that work together through software to regulate your blood sugar on its own and cuts down on user input and the need to control blood sugars,” explains Lacher, who is hopeful there might be a cure in his lifetime and actively works to get more and more people invested in the cause in order to find it. Unfortunately, that also means righting a lot of the lingering misconceptions about Type 1 Diabetes—a cue he took from former JDRF spokesperson Nick Jonas, who lashed out at the owners of fitness brand Crossfit after they posted a crude joke on social media equating unhealthy lifestyles with the onset of the disease. “Mixing up Type 1 Diabetes, which is an autoimmune disorder and unpreventable, with the sometimes unhealthy habits that can create Type 2 Diabetes, is the biggest thing that is not understood and often the most hurtful,” says Lacher, who is always happy to provide information and answer any questions people may have as well as connect them with resources.

“I really want to stay involved and do as much as I can with the JDRF and other organizations,” Lacher says of
his long-term goals. “A cure is what we are trying to reach as soon as possible, and getting other people involved will let us reach it even quicker.”

The JDRF’s annual One Dream Gala returns to Arie Crown Theater at McCormick Place on December 12 at 5:30 p.m. Purchase tickets at jdrf.org/Illinois/events.

This Article is from the December 2015 Issue of Forest & Bluff