Taste on Chestnut was experiencing a mid-afternoon lull when equal parts chef and owner, Steve Leviton, invited me to sit across from him at one of the white table-clothed tables in front. The cozy dining area—with its mocha-colored walls, blue table napkins, and modern artwork—was a nice compliment to the admittedly lavish, up-tempo American cuisine Leviton had laid out on the table.

If you’re looking for a “downtown feel” out of your restaurant, look no further than Winnetka’s newest fine-dining experience. Leviton wants his customers to ‘Taste’ with their eyeballs as well as their palates: a benchmark you can aspire to when you’re a chef with more than 20 years experience in chalets and auberges, hotels and private clubs.

Leviton studied in the kitchen of one of Switzerland’s most famous restaurants, Auberge du Lion d’Or on Lake Geneva; and Moulin de Mougins, a 16th century mill turned restaurant on the French Riviera. (In 1977, the famed French chef and Michelin-star whisperer, Alain Ducasse, worked there as an assistant, where he learned the Provençal-style cooking methods for which he later became renowned.) At each, respectfully, Leviton received certificates in the culinary arts. 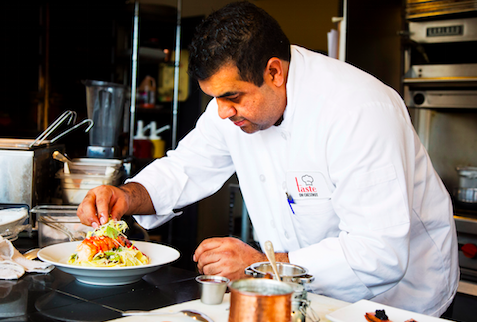 But he’s also a local boy through and through. At age 12, Leviton learned how to cook from the short order cooks at a Skokie deli. Growing up five miles away in Evanston means Leviton is well aware of the storied history in this space, with the precursor to Taste on Chestnut being Jerry’s/Corner Cook’s. Patrons of Jerry’s will be glad to know Leviton has kept the original space’s open kitchen layout intact, which means diners can watch the chef’s prepare their meal right before their very eyes.

In January they will celebrate their one-year anniversary. Has anything changed, I asked him, since opening the restaurant?

“We certainly evaluate all the time: this is a restaurant that people like dining at; people like eating here,” said Leviton. “They like breaking apart our menu because there are so many interesting things to it: people like having entrees for appetizers, they like having entrée salads being shared at the table, they’re not afraid to have what they like and have it the way they like to have it.”

Professional experience working as executive chef at Kiki’s Bistro and Wolfgang Puck Catering in Chicago, as well as director of dining in country clubs along the North Shore, Leviton has a wealth of recipes he brought with him to Taste on Chestnut. One of which is the creamy lobster pappardelle—or large, very broad, flat past noodles, similar to wide fettuccine. The name derives from the Italian verb  “pappare”, to gobble up.

Which is exactly what in-house diners and those who make this dish at home will be very keen on doing.

Taste on Chestnut is located at 505 Chestnut Street in Winnetka. For more information, to view their menu or make a reservation, please visit tasteonchestnut.com or call 847-441-0134. 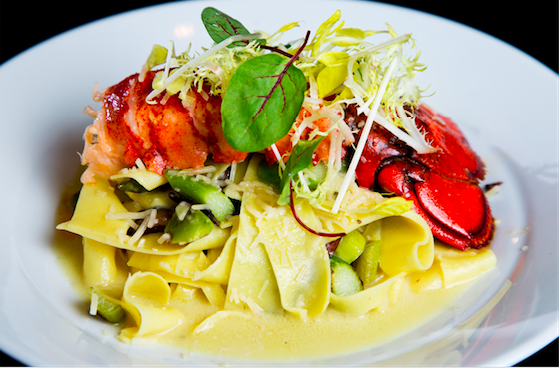 In a medium pan heat chicken stock. Add parmesan cheese and reduce to half. Add asparagus and mushrooms. Add pappardelle, finish with truffle oil and parmesan.

Place in a dish bowl and place lobster tail on top of pasta. Garnish with parmesan and tarragon.

From The North Shore Weekend newspaper.