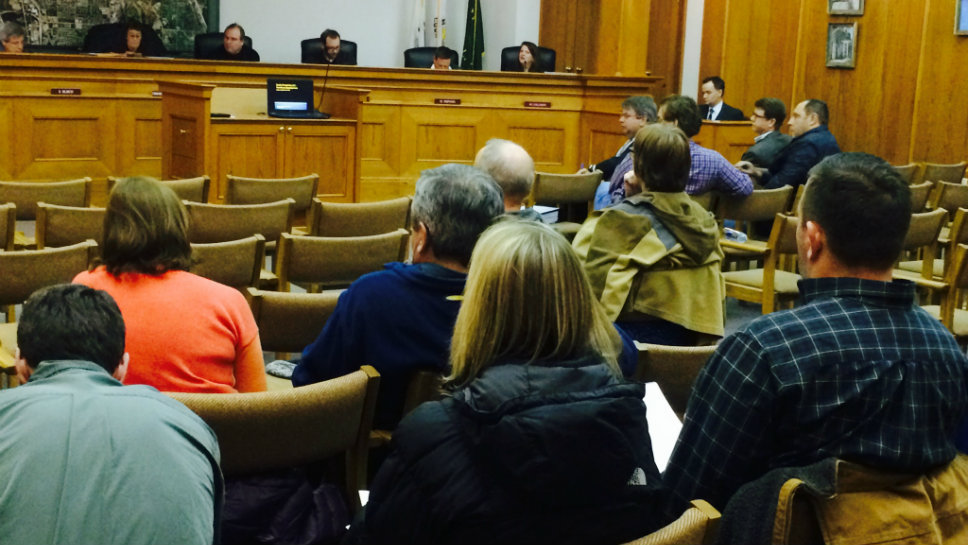 More than 25 people came to hear what the Northbrook Plan Commission would do with a proposed 72-unit townhome development proposal by the Jacobs Companies.

NORTHBROOK—The developer of a proposed 72-unit townhome project near downtown heard such a variety of suggestions from members of the Northbrook Plan Commission he was unsure of his next step.

Commissioners gave representatives of the Deerfield-based Jacobs Companies ideas ranging from adding a commercial component to the project to reducing its density during the third public hearing on the property Dec. 1 at Village Hall.

“I heard a lot of divergent opinions, which makes it much more difficult to make the plan appealing,” Cal Bernstein, the company’s attorney, said. “We’d like to get a favorable recommendation. We know we won’t get a unanimous vote.”

The project, planned for the east side of Shermer Road between Waukegan Road and Church Street, started out as an 84-unit development, was reduced to 73 units for the second public hearing and 72 for the third, according to Bernstein.

Keith Jacobs, the company president, said pricing would range from $499,000 to $699,000 with two- and three- bedroom units as well as units designed for empty nesters with a first-floor master bedroom.

Density was not the only concern expressed by the commissioners during a discussion among themselves after nine members of the public spoke, none in favor. The members of the Plan Commission said they were worried about traffic patterns, space between buildings and density as well as their vision for the central business district.

“I would like to see mixed use,” commission member Dan Pepoon said. “This puts more people in the downtown but it will not do it for me. It does not bring business into downtown.”

Density was a key issue for many. Five of the members of the public who spoke said there were too many units and they were too close together.

“The number one issue is density,” Carleton Krall said. “This still does not fit with the neighborhood.”

Commissioner Norm Jacobs, who is not related to Keith Jacobs, was more specific about his concerns over density. He also chimed in on his preference for a mixed-use development.

Some of the townhomes would have shared driveways under the current plans. Other commissioners and private citizens said they wanted to see those go away. Some also want larger setbacks from the property lines. Others want shorter buildings.

Under the current plans, the property will be 40 feet from its closest neighbors with the buildings ranging in height from 35 feet to 43 feet, six inches, according to a presentation from David Schoon, the village’s assistant director of development and planning services.

Despite criticism from the commissioners, complimented Jacobs Companies for the progress it has made since its first appearance.

“You’ve come a long way toward meeting our suggestions,” commissioner Steven Elisco said. He went on to offer a list of changes he still wanted to see.

The only certainties after the meeting were a fourth public hearing at 7:30 p.m. Jan. 19 at Village Hall, and Keith Jacobs’ need to soak in the messages from the trustees.

“I have to digest everything that was said tonight,” Keith Jacobs said after the meeting when asked what changes he was willing to make.