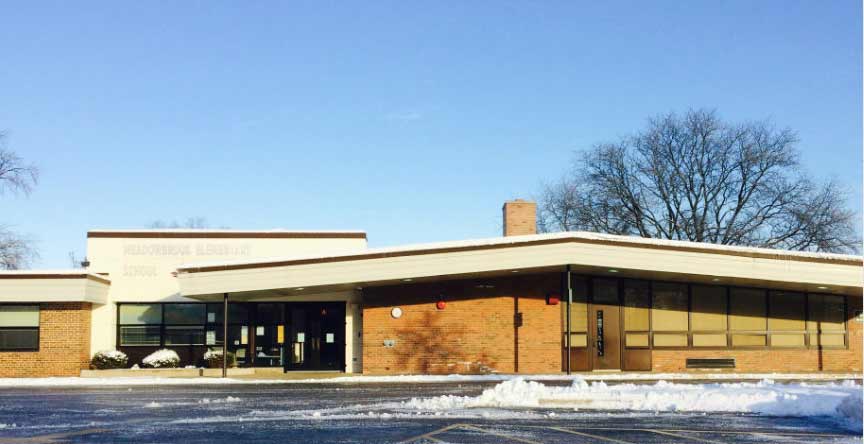 Northbrook’s Meadowbrook Elementary School may be housing a full day kindergarten in the future.

NORTHBROOK — Members of the Northbrook School District 28 Board of Education got a look at the potential of a full-day Kindergarten program at their last meeting and they will learn more about the financial impact when they meet at 7 p.m. Nov. 24 at the district office.

During the board’s Oct. 27 meeting, the members got a report from Superintendent Larry Hewitt explaining the benefits of full day Kindergarten, what other area districts were doing, national trends, and some basic financial information.

Hewitt said in his report approximately 75 percent of Kindergartens throughout the country offer all-day programs. He wrote 11 of 19 districts within a seven-mile radius of the district have full-day classes and all but two—Deerfield Public Schools District 109 and Aptakisic Trip District 102 — do not charge.

The only potential tuition mentioned in Hewitt’s report was a possible $1,000. At this time Deerfield charges $2,600 and Aptakisic $2,655. Whether or not the program is fee based, a half-day kindergarten will still be available at no cost because of state law, according to Hewitt’s report.

Though Hewitt did not go into fiscal detail as he is supposed to do on Nov. 24, he did say there were three potential economic pitfalls on the horizon, and that all are beyond the district’s control. He said the district could get less money from the state based on pending legislation, the district could become responsible for fully funding teacher pensions, and there is a possible property tax freeze being discussed in Springfield.

Any edge students receive from a full day of Kindergarten now usually goes away by the time they reach third grade, according to research cited in Hewitt’s report. He said there is an exception.

“The only caveat to this finding occurs with two sub-groups of students: students from disadvantaged socio-economic backgrounds and those whose first language is not English,” Hewitt wrote in the report.

The district already has the facilities in place at its three elementary schools, according to Terry Ryan, the interim communications coordinator. She said the extended-day facilities at Greenbriar, Meadowbrook and Westmoor Elementary Schools could become the classrooms.

With the facilities in existence, Ryan said the primary extra expense would be additional personnel in the amount of $651,338 as stated in Hewitt’s report.

“We would need five new teachers and five new aids and one more to teach music, art and physical education,” Ryan said. “Some of the schools have two sections.”

Ryan also said she did not anticipate enrollment being significantly different next year than it has been. She said the number of children who attend morning Kindergarten and those who go to class in the afternoon are approximately the same.

Hewitt also gave board members a peek at what the full-day program would look like for students in his report. He said reading could be taught each day for 45 minutes and another 45 minutes for writing. That is twice as much time as currently spent.

There would also be more time for math, hands-on science and social-emotional interaction. Additional time would also be available for music and moving around to provide “brain breaks.” Extra moments would also be there for crafts as well as things as basic as tying shoes.