From The North Shore Weekend newspaper.

It was the talk of the restaurant, Lovells of Lake Forest, for 16 years. An immense, magnificent 20-by-8-foot mural rested above and behind the main bar, greeting each patron, starting an instant conversation. It is dubbed, “The Steeds of Apollo.”

The 1970 Apollo 13 mission crew patch was patterned after the mural, created by artist Lumen Martin Winter in 1969. The mural depicts several horses in flight, their legs in various stages of gallop high above Earth.

“We threw the original plans for the building in the garbage can,” chef Jay Lovell, son of Apollo 13 commander Jim Lovell, recalls. “The original wouldn’t have been big enough for the mural, so we started over. The ceiling had to be three feet higher.

“It’s beautiful, striking … huge, big, prominent,” he adds. “The mural was the focal point of the restaurant. It was all you saw as soon as you entered the restaurant. My wait staff was well-versed in the history of the mural, always ready to talk about it, always prepared to answer questions about it. Horse people appreciated it. People posed for pictures in front of it.”

Jay Lovell was an artist in his pre-chef and pre-restaurateur years, a handler of palettes before heeding the call to sate palates. The Lake Forest resident produced paintings, some oil, some watercolor. He dabbled in graphics. He sculpted. The chef formerly known as the artist recognized the pull of “The Steeds of Apollo” from the moment he welcomed his first diner at Lovells of Lake Forest.

The restaurant closed in April. The mural needed a new home. 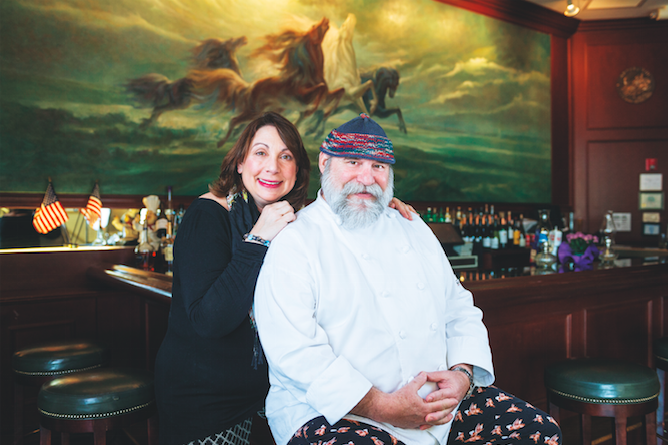 It now rests in the lobby of the James A. Lovell Federal Health Care Center in North Chicago. Jim Lovell donated it to the center. It was mounted in the time for the fifth anniversary of the facility, on Oct. 1. The mural continues to start instant conversations.

“It’s in a really good place,” says Jay Lovell, co-owner (with his wife, Darice), of Jay Lovell’s Fresh Homemade Seasonal restaurant in Highwood. “It will be there for many, many years. Forever, I hope.”

The mural’s backstory is a captivating one, part serendipitous, part Hollywood. Jim Lovell and his Apollo 13 crew mates, Jack Swigert and Fred Haise, were staying at the St. Regis Hotel in New York, in 1969, when they first got an eyeful of the mural. They asked Winter to create an insignia from the theme of “The Steeds of Apollo” artwork for their mission. Embroidered along the top of the patch is “Apollo XIII”; “Ex Luna, Scientia” (Latin for, “From the Moon, Knowledge”) is featured near the bottom of it.

Lovell informed actor Tom Hanks, who knew all about the mural. Hanks had portrayed Lovell in Apollo 13, the movie, directed by Ron Howard, about the perilous journey around the moon. Hanks then had his wife, Rita Wilson, and her mother attend the auction. The women bought the mural.

Hanks, aware Lovell and his family were about to open a restaurant in Lake Forest, had the mural shipped to an art warehouse in Chicago. Hanks contacted Lovell, unaware of what the actor had purchased and arranged. Lovell entered the art warehouse. There it was, a 20-by-8-foot gift, a familiar, spectacular sight for eyes belonging to the man who was the first person to fly in space four times.

The former astronaut was over the moon. On Earth.