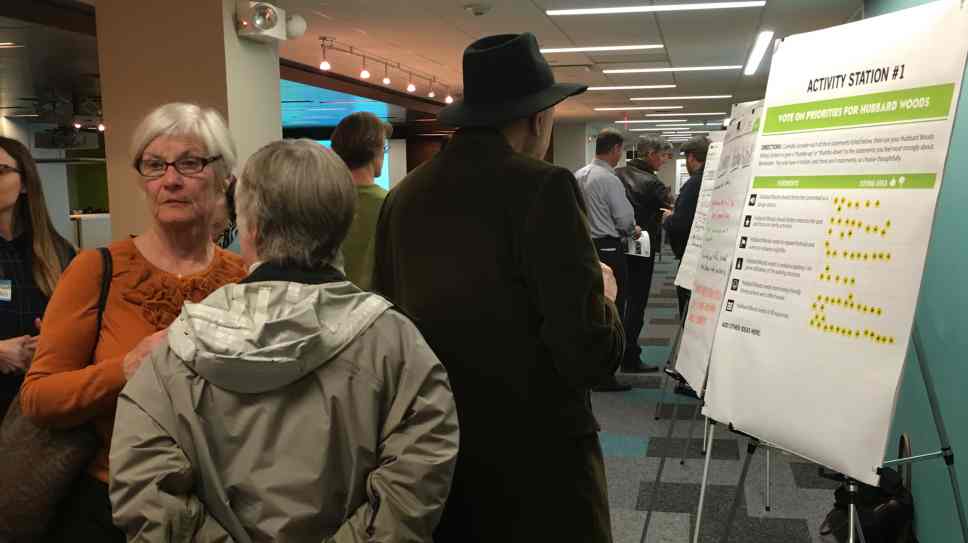 WINNETKA – Winnetka residents gathered at North Shore Country Day School on November 17 to provide input on what they would like to see in Winnetka’s business districts. The workshop was organized by consultants Teska Associates as they work with village officials to develop a new downtown master plan for Winnetka’s struggling business districts.

Jill Beckstedt lives in Hubbard Woods and attended the meeting with friends. “Why do we live in such a gorgeous area with such limited offerings?” she asked. Beckstedt expressed excitement about the work currently being done to Hubbard Woods Park and would like to see the village capitalize on that project.

“Let’s keep adding to that momentum. It would be so amazing. It is sad to see the empty storefronts. I want a thriving, cozy downtown so we don’t have to go elsewhere,” Beckstedt said.

The workshop was organized around four activity stations set up to gather residents’ ideas. “The  more you share the more we learn,” said Michael Blue, project consultant for Teska.

One station provided boards that included statements about each of Winnetka’s business districts – Hubbard Woods, Indian Hill and Elm Street — where residents could post a thumbs-up or down sticker next to each statement. For example, statements about Hubbard Woods included “Hubbard Woods needs more family friendly dining options and coffee houses.” Overwhelming, residents appeared to support more of everything in all three business based on the number of thumbs up stickers.

Another station allowed residents to use their artistic skills to create a collage from magazine clippings that portrays their vision for Winnetka’s business districts. Consultant Sarah Kellerman of Sam Schwartz Engineering noted that in this type of project they look for consistent themes, trends and new ideas. “You start to see themes emerge,” she said.

Residents were also invited to play a game of Mad Libs where they could fill in the blanks on what they would like to see in the business districts. “This is an attempt to get the message out in as many ways as possible,” said Brian Norkus, Assistant Director of Community Development. Norkus noted that the village plans to hold more workshops and residents can also go to website the www.winnetkadowntownplan.com to share ideas.

And residents had the opportunity to share ideas about each business district at a round table discussion moderated by consultant Lee Brown. At an informal discussion residents raised questions such as why isn’t Winnetka attracting more restaurants like the neighboring suburb of Wilmette. One resident expressed concern that there is no place for middle school children to go, while another resident could recall all of the stores that used to be in Winnetka.

Going forward the consulting team lead by Teska and comprised of Goodman Williams Group and Sam Schwartz Engineering plan to use the input received from the workshop to create a draft vision statement that will be presented at a steering committee meeting held on December 16. The steering committee is comprised of representatives from the community, including three village trustees who will help the consulting team better understand Winnetka. Working groups have also been formed to function as community liaisons and represent residents, merchants and commercial property owners.

If all goes as planned, a downtown master plan should be finalized and ready for adoption by September 2016.