“It’s very strange to be interviewed because I always ask questions,” said Arielle Nobile, taking a sip of tea. On a recent morning with the sun shining brightly, we were seated at a table next to a large bay window in the farm to table restaurant, Fuel, in Wilmette. Every so often a loud choo erupted from the adjacent tracks, signaling the arrival of another Northward or southbound train.

The roles had been reversed for Nobile: A loquacious but not unduly talker; an inquisitive but not overly prying interlocutor, she frequently finds herself interviewing entire families for Legacy Connections Films. What was once an off-the-cuff suggestion by her therapist turned a pet project of sorts turned full blown business model, Nobile was in town to celebrate a crucial milestone—a 10-year anniversary—because, as she begrudgingly admitted: “Milestones should be celebrated.”

Arranged around a single plate of hers were fried eggs cooked over-medium, multi-grain toast, and a colorful side of fruit. As we settled in, I sat and listened to an interesting story told by an even more interesting person: what amounted to the legacy of Legacy Connections Films, as told by its idiosyncratic founder.

Nobile had just graduated from New York University with a degree in theater when hijacked planes crashed into the World Trade Center on September 11th. A world away, Nobile was home in Wilmette. But that didn’t stop her from getting deeply rattled. When she moved back to New York three weeks later, it was with a handheld, $200 Canon video camera, and she started filming everything. (Said Nobile of that time: “I mean, I have crazy amounts of footage.”)

Filming became, for her, a kind of solace; her own personal way of dealing with what had happened: the unnecessary and wanton destruction, the loss of life on such a large scale.

At NYU, Nobile had studied experimental theater. “What does that mean exactly?” she posited with rhetorical emphasis. “It means they were teaching us to create our own work, whatever form that took.” 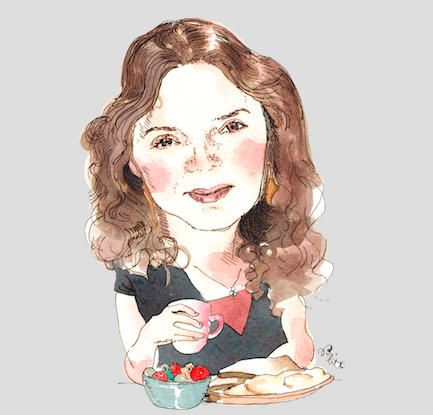 I pressed her if being behind the camera was always what she had envisioned for herself. “I wanted to be an actress; I wanted to be a movie star,” she admitted, quickly adding: “But I didn’t want to be a movie star because I had a big ego, I wanted to be [one] because I felt the movies that I watched had such an impact on me my whole life, and you can change people’s lives through movies—emotionally, spiritually.” At this point she smiled: “I remember watching—oh, gosh, what was it called—it was a movie about the destruction of the rainforest when I was in Jr. High.”

While the name of the movie currently escapes her, (FernGully: The Last Rainforest is a good bet) watching it at a young age had a profound effect on her: sending her home in an impassioned resolve to write a 12-page, caps-locked screed on an early Macintosh computer, imploring all who would listen to save the rainforest.

Or in other words, Nobile had a knack for the dramatic.

Nobile is Jewish and a lifelong vegetarian. She can speak Spanish fluently (the usual way she asks for her eggs is huevos fritos). At nine years old, she went to learn the performing arts from Byrne and Joyce Piven of the Piven Theatre Workshop in Evanston (and the parents of actor Jeremy Piven).

There, she learned how to play Theatre Games—the basis of improvisational theatre—invented by theatre academic Viola Spolin. As a teen, she met Joan and John Cusack and Lili Taylor, and performed for them. “It’s a very special place,” added Nobile. Though her daughter is a toddler and currently lives with her and her husband in Colorado, she is already telling everyone who will listen that she wants to act. “We’ll see—I’m not pushing that on her but she’s very dramatic,” said Nobile. “I plan on sending her [to Piven Theatre] when she’s old enough to do the training,”

Eventually, Nobile found her way to Second City. There, she took part in the first class of the yearlong Second City Directing Program. It was experimental, which Nobile clearly excelled at. And the first-class received a precious commodity: access. Access to current directors, access to all the old archives—or what wasn’t destroyed in a recent extra-alarm fire at the Second City offices three months ago.

“Save things!” said Nobile, or a siren call that, she hopes, doesn’t fall on deaf ears. That’s what Legacy Connections Films aims to do. It’s a personal documentary, a treasure trove of memories, for families; a story told by you and your family for you and your family. Nobile founded her company in 2005. She was a disillusioned twentysomething (“I was supposed to be a movie star by now!”) chasing after a suggestion by her therapist to sit and listen to the stories of older generations. She started close to home, with her own family, who is “as every family is, crazy in its own way.”

Since then she has interviewed over 330 people and made countless, high-quality documentaries for her clients. She’s heard people tell elaborate yarns about their lives: one older gentleman stringing together a story for 3 hours straight, without stopping, or the equivalent of a marathon for an interviewer.

She’s met 90-year-olds who are not wise, and much younger people that seem to have lived a lifetime—or more. She even met her husband after interviewing him (long before her business, however).

She’s made an anthology of movies for a Polish family of 13 siblings that immigrated to the U.S. and came to live in the Upper Peninsula of Michigan: “Literally that story of walking over two countries in the snow with one of the kids having polio.”

And she has her ambitious sights set on telling a story of a woman from Iowa whose father was gay, HIV positive, and hid it from the world. “What does it feel like to live a whole life in the closet, and how does that damage a family?” explained Nobile. Her goal is to go—where else?—to the Sundance Film Festival. You get the feeling she’s already bought the ticket.