The folks who live on the same street in Evanston as Freda Love Smith don’t realize it but they have a modern rock legend living in their midst. Smith, whose tasty memoir Red Velvet Underground (Agate Books, 2015) has just been published, made her name as the drummer in the influential Boston rock band Blake Babies alongside Juliana Hatfield (of Lemonheads fame). She also went on to perform in bands such as The Mysteries of Life and Some Girls. Smith writes about her music career, as well as motherhood, marriage and life, in the memoir. I spoke with Smith shortly before the publication of the book.

Gregg Shapiro: Freda, Red Velvet Underground, the title of your “rock memoir with recipes,” is truly inspired. Was the title your invention or was it a group effort?

Freda Love Smith: The title actually came from a conversation I had with an editor a couple of years ago. At the time, I’d started drafting the book and it was really built around the frame of doing cooking lessons with my son Jonah. There wasn’t a lot of music in it; there wasn’t a lot about me and my background. It was about this year (of lessons), it was much simpler. An editor was interested in it, but she said, “I really want to hear more about you. I really think you need to break this frame open a little bit and allow for your past to come in.” I got really excited about that. I thought it sounded fun. I started experimenting with it and it unfolded really naturally. When I started playing music, when I moved to Boston and started the Blake Babies, I was really close in age to the age of my son when I was doing these cooking lessons with him. It was really easy to connect those dots and to start to find the patterns of connection. It made it so much more fun to allow my whole self into the book, to not just be me as a mom, but to be me as a drummer as well. It was funny, at the time I wondered why I hadn’t thought of it. Sometimes you need a fresh pair of eyes and another perspective. I got really excited and was emailing back and forth with her (the editor) and she said, “I’ve got the title for the book! It’s Red Velvet Underground. And then, at that moment, I really knew what the book was. It evolved through stages and became something different. It wasn’t until I had the title – and I thank her for the title in the acknowledgments in the book – because everything really crystallized around that. Then I knew what book I was writing. It was an interesting testament to how complicated the writing process can be. How it can have all these different stage and how you never know what will catalyze something completely. It could have never happened. It could have fallen apart. When I knew what I was writing, I had a lot more fun. It came together a lot more easily than what I was trying to do before where I was just banging my head up against this small concept that I had.

GS: You write in the book about the scarcity of influential female drummers. The first one that comes to my mind is Karen Carpenter.

FLS: Oh, yes, she was a wonderful drummer.

GS: Then, of course, Maureen Tucker of The Velvet Underground. Were either or both Tucker and Carpenter influential for you?

FLS: Maureen Tucker was hugely influential. The Velvet Underground, in general, was the band that made me the most excited about the idea of playing music. I wouldn’t say that I emulate her style and I can’t really approach her level of ability, the fact that she was a woman was initially inspiring to me. Maybe because of that, I never questioned becoming a drummer. There were definitely few examples of women drummers, but the ones that were there were extraordinary. She was definitely the foremost one for sure. 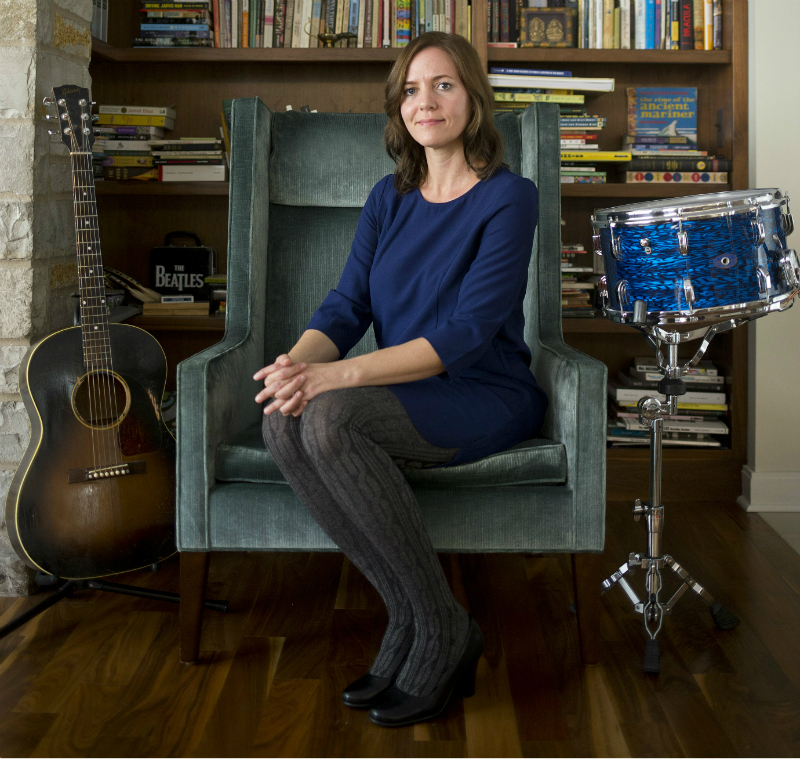 GS: What do you think of Janet Weiss of Sleater-Kinney’s drumming?

FLS: She’s an outstanding drummer. I feel like she’s the heart and soul of that band. I love her drumming. I haven’t had a chance to see her play live, but I think she’s exceptionally good.

GS: 2015 has been a big year for women writing about rock. In addition to your book, there is also Girl In A Band by Kim Gordon, Jessica Hopper’s The First Collection of Criticism by a Living Female Rock Critic, as well as forthcoming books such as Patti Smith’s M Train, Carrie Brownstein’s Hunger Makes Me A Modern Girl and Chrissie Hynde’s Reckless: My Life as a Pretender. Why do you think this is happening at this time?

FLS: I noticed it, but I have no idea. I think it’s really exciting that all of these voices are emerging. It seems like sometimes that happens on the cultural landscape where a certain kind of book or media will just spring into being all at once. I certainly am aware of it since I have a memoir coming out. I’m kind of scratching my head wondering where I fit into all of this. I’m not as famous as any of these women. I’m not as cool as Kim Gordon. [Laughs] I’m just hoping that I have a really good macaroni and cheese recipe. There’s something to distinguish it in that it’s not just a rock memoir, it’s also about food. I’ve been super aware (of the other memoirs) and wondering, “Why now?” [Laughs] I wish I had an answer.

GS: There’s a wonderful passage in chapter five where you say, “I hadn’t talked with my kids about my rock life…” Were you surprised to realize that you hadn’t shared such a major part of your life with your sons?

FLS: I’ve definitely had moments where I kicked myself (about it). I think maybe because there’s a lot that’s been unconventional about our family, about their upbringing, that maybe I thought I had to make an effort to make a “normal” family and not dwell too much on these other aspects of my life, my musical career. I definitely think they are interested in that. Giving them a fuller picture of my life, my background, has been good for them. Sometimes you can over-think it with young children. Think you are protecting them and trying to make things stable and normal. But I don’t want to overstate that. There was nothing terrible that I needed to protect them from. In seeking normalcy, I neglected to let them see a fuller picture. I think kids can handle it [laughs]. It makes them look at me a little bit differently and maybe changes the way they approach their own lives. I think it’s been good to open that up and let that be something that the family’s aware of. I’m playing music again. I have my drum set up in my bedroom. My son Henry, who’s 16 now, when he has friends over, they walk by and see his mom in her room practicing her drums. It feels good to be completely open about that. This is just a part of our family.

GS: Food and cooking were important you when you were growing up and as a mother you found it to be a bonding and educational experience with your sons Jonah and Henry. Would you say that in a way, Red Velvet Underground is a kind of how-to book?

FLS: I think that’s one way to look at it. If I could do this with my sons, anyone can. I certainly don’t have any kind of perfect domestic life. Everybody’s really busy and we don’t have a lot of money. Even still, I found a way to conduct this experiment and have this experience with my sons. I think it could be read as an approachable how-to. It doesn’t have to be perfect to be a valuable experience of teaching your kids how to cook. 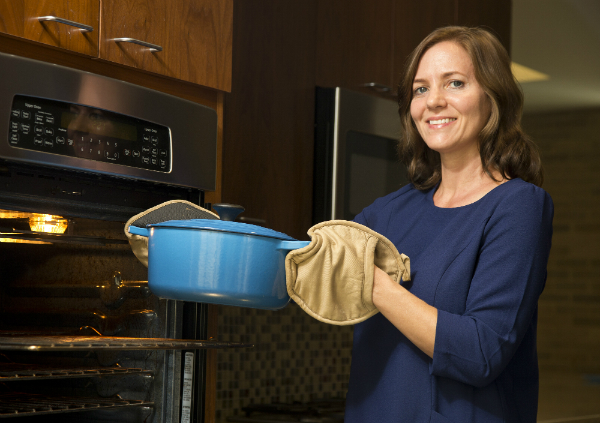 GS: I also love the story about how your first band Blake Babies’ name came to be.

FLS: It was something we agreed upon before we went to a poetry reading by (Allen) Ginsberg. We couldn’t think of a band name, so we all agreed that we would ask him what we should name our band after his reading. Whatever words came out of his mouth – that would be the name of our band. It was a little bit scary because we had made a pact. Even if he said, “I don’t know,” that would have been our band name [laughs]. Fortunately, he was Allen Ginsberg and he didn’t say, “I don’t know.” He looked at us and he said “Blake Babies.” It was a direct reference to (poet) William Blake who really influenced and intrigued Ginsberg. In fact, at that poetry reading, which was at Harvard University, he’d lead the audience in a Blake sing-along. A piece of Blake’s poetry had been set to music and we all sang. I think he was thinking about poetry and music, and we must have appeared very young to him, so I’m not surprised he put the “babies” on the end. He laughed when he said it. It was really a sweet moment. We got really lucky [laughs]. We asked the right person and he said the right thing.

GS: You live in Evanston, which is also home to singer/songwriter Nora O’Connor, whom you mention in the book, as well as Jason Narducy, who plays in Bob Mould’s band and has his own place in punk and modern rock history. Would it be fair to say you have found a music community for yourself in Evanston?

FLS: I’m really happy to say that yes I do feel that way. I’m actually working with Jason in a couple of ways. Evanston has ended up being a really good place to be for an aging indie rock musician. Jason has a band called Split Single, and my husband Jake plays bass in the band. Also, as Jake and I have slowly, casually restarted our band The Mysteries of Life, Jason plays bass with us. We recently played a gig with him. Jason’s a friend and someone that we work with. Nora, too. I’ve done a gig with her. We both helped out Walter (Salas-Humara) of The Silos when he was in town playing at Schuba’s. Nora sang with him and I played drums. I’ve met these amazing people. They inspire me and they’re my friends now. They’re people that I work and play with. We’ve been in Evanston for five years and it feels like home now. A lot of that has to do with the like-minded musicians that we’ve been lucky enough to meet and work with.