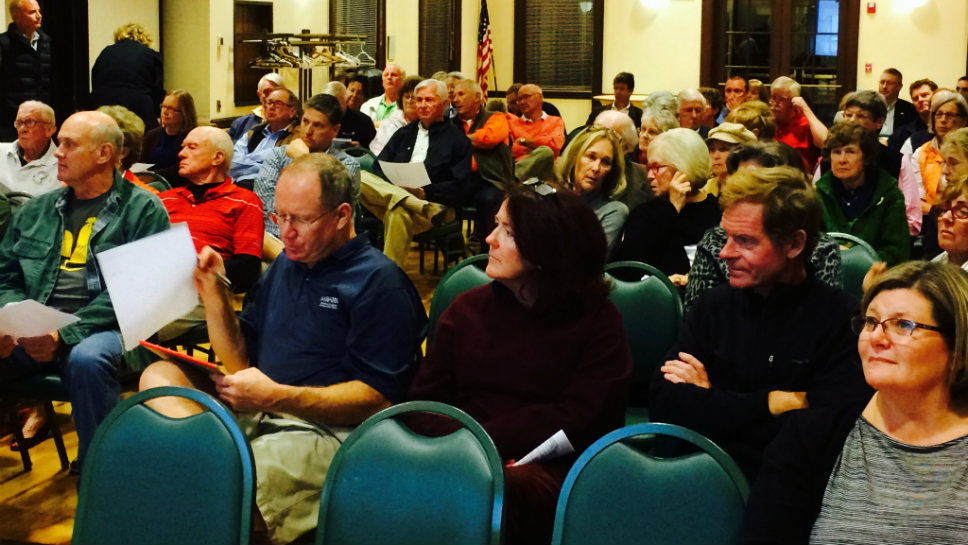 A crowd of more than 100 people heard the status of Deerpath Golf Course an offered their opinions Nov. 4 at Dickinson Hall. Photo by Steve Sadin for DailyNorthShore.com.

LAKE FOREST – Lake Forest officials transmitted the message the Deerpath Golf Course will not be closed loud and clear to local golfers and they made it just as obvious they want an improved facility.

Both City Manager Robert Kiely and Alderman Tim Newman said the course would remain open during a meeting updating course users Nov. 4 at Dickinson Hall as the officials got an earful from more than 100 people there.

“Let me open by saying we are not closing the course,” Newman, the chairman of the city’s Golf Advisory Commission, said. “We want a future for Deerpath Golf Course which is sustainable. From the size of the crowd in this room there is a lot of passion.”

The fervor came out in the form of questions on course maintenance and other golf-related issues like the method being used to restore the putting greens and the influx of younger players in the junior golf program.

“What you’re doing with the greens is not working,” one man in the crowd said.

Ben Blake, an executive with Kemper Sports, which manages Deerpath on a contract with Lake Forest, said the course is 90 years old and the greens are the same age, presenting issues of maintenance within the current budget.

“There are problems with old greens,” Blake said. “We can’t get a six-inch root structure you have on new courses. In the long term it will get better.”

Kiely presented financial analysis for the last four years and a projection through 2020 showing a profitable operation before capital improvements are made and required bond payments funded. After those expenditures, the cash flow is negative.

By the end of the city’s 2011 fiscal year, the course’s fund balance was depleted and the Parks and Recreation Department started making contributions, according to a document presented at the meeting. The $26,022 deficit in 2012 grew to over $200,000 in the last fiscal year.

Kemper first got involved with the course three years ago when it helped with marketing and provided a course manager, according to Newman. With the 2015 golf season, Kemper took complete responsibility for management based on the budget it received from the city.

Many in the crowd would like to be further ahead than the city is with the course. Kiely said the course is losing money and needs funds from other city sources to break even. Before the city starts looking for money, Newman said a more thorough study of the course and its potential is necessary.

Newman said Lake Forest is on the verge of signing a contract with a consultant to develop a five-year master plan. Once that is in place, financial decisions will be made how to fund it.

“We have to have a baseline before we go to the City Council,” Newman said. “A community of Lake Forest’s stature has to have a public golf course,” he said in a Daily North Shore interview last week emphasizing Deerpath’s permanency.

Another person at the gathering, Suzanne Riccardi, handed out the email addresses of all eight aldermen and told those in the crowd to make their feelings known. Newman encouraged people to do that.

Bridget Hatchen, another member of the crowd, suggested finding private money to help fund the course. “We did that for the (Forest Park) Beach,” Hatchen said. “We put a lot of money into Market Square. The golf course is an important part of Lake Forest too.”

Some relief on course maintenance may be on the way by the time the 2016 golf season arrives. Kemper has asked for $450,000 for capital improvements next year $750,000 in 2017, according to Blake. He did not elaborate when asked by people in the crowd during the meeting what he had in mind.

Rick Walrath, the course manager employed by Kemper said the money would go to turf equipment to replace maintenance machines which have reached the end of their useful life, clubhouse improvement and amenities.

“The green mowers will give it a more even cut,” Walrath said. “The ball will have a cleaner roll.”