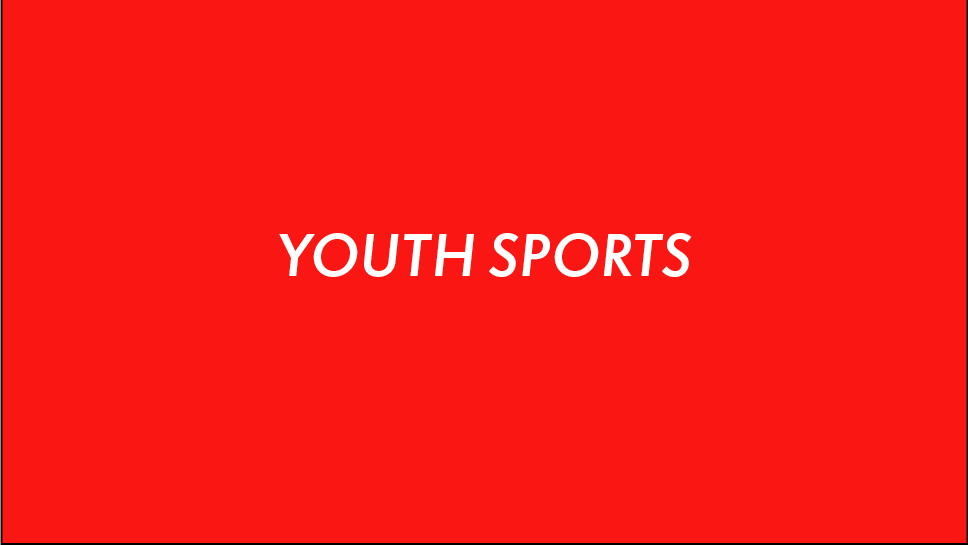 Heavyweights
Trevians vs. Lake Forest
— Highlighted by the running of Mike Stringer, Nate Schinderle, Charlie Finks and Tom Criswell and the passing combo of quarterback Brooks Wimer and wide receiver Nate Davidson, the Trevians pulled out a 14-8 over Lake Forest.

Criswell’s TD run and Steve Preston’s PAT kick made it 8-0 late in the first half. Then, after LF tied the game 8-8, the Trevians scored the game-winning TD on a red zone pass play from Wimer to Davidson.

Good defense also was in evidence. Thanks to the play of defensive linemen Mitch Shelman and Taft Lewis, the Trevians held off Lake Forest in the fourth quarter.

The Trevians won this game despite having seven starters sideline due to injuries from their Week 5 loss to Evanston 38-0.

Lightweights
Trevian White vs. Glenview
— Charlie Hoban’s two-yard TD run in overtime, along with a PAT kick, lifted Trevian White to a 22-20 victory over Glenview. With the win, Trevian White improved their record to 4-3 on the season.

Glenview jumped out to a 14-0 lead in this one. But Trevian White rallied. First, Isaac Ko got his team on the board with a 50-yard TD run. Then, with time running out in regulation (12 seconds left in the fourth quarter), Hoban connected with Tyler Hardin on a 47-yard pass play. Hoban added a PAT to send the game into overtime.

Player of the Week: Charlie Hoban 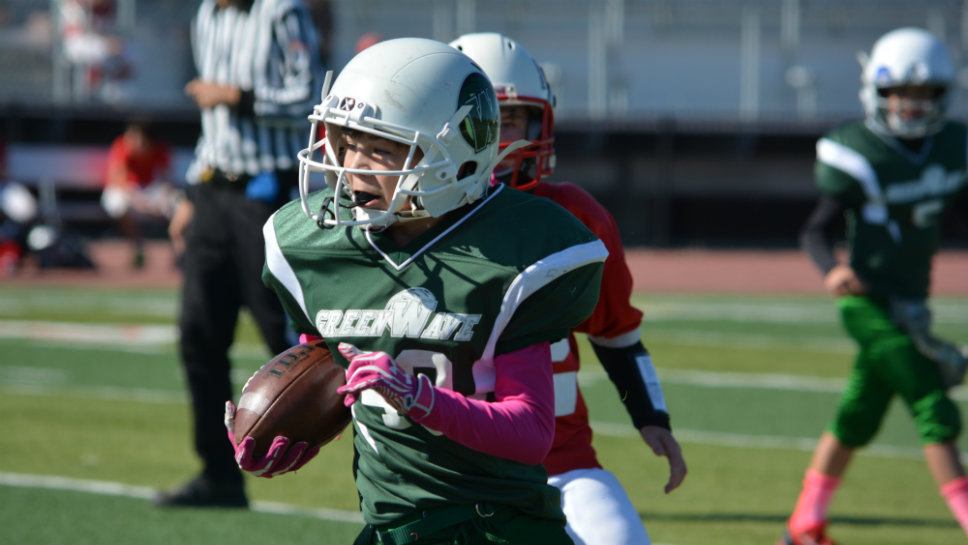 Josh Kirkpatrick of the Green Wave Middleweights returns a kickoff 67 yards for a touchdown.

Middleweights
Green Wave vs. Niles West Wolves
— Josh Kirkpatrick had the play of the game, when he returned a kickoff 67 yards for a touchdown early in the second half.

The Green Wave wound up claiming a 13-12 victory over the Wolves.

Charlie Crowe’s 16-yard TD run and Graham Mastros’ PAT gave the Green Wave a 7-6 lead at halftime. Then, moments after the Wolves went a head 12-7 early in the second half, Kirkpatrick came up with his return.

Luke Madigan was another top running back. Following the blocks of Sam Gluck, Daden Minogue and Tyler Hurley, he carried the ball 10 straight times late in the game to seal the victory.

Player of the Week: Graham Mastros 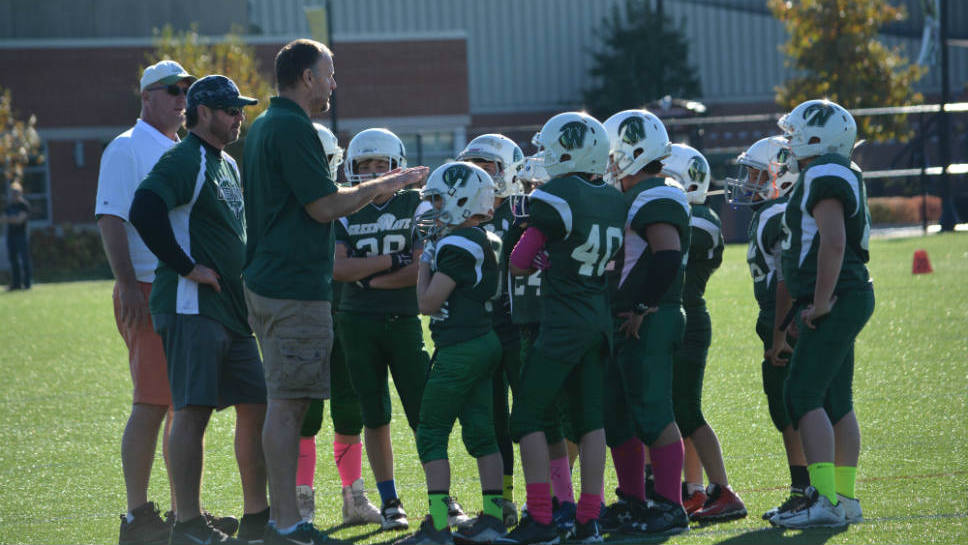 Fourth Grade
Green Wave vs. Northbrook
— Despite a huge play by Ben Kennon, the Green Wave dropped a 14-7 decision to host Northbrook on Oct. 18. Kennon helped the Green Wave strike first, when he scored a 50-yard off tackle run. Moments later, the team went up 7-0 on a PAT pass from David Finfer to Mathew Russell.

Northbrook’s defense tightened after Kennon’s TD, while the Northbrook offense scored on a pair of big plays: a 50-yard run at the end of the first half and a 30-yard run on the first series of the second half.

Player of the Week: Matthew Russell 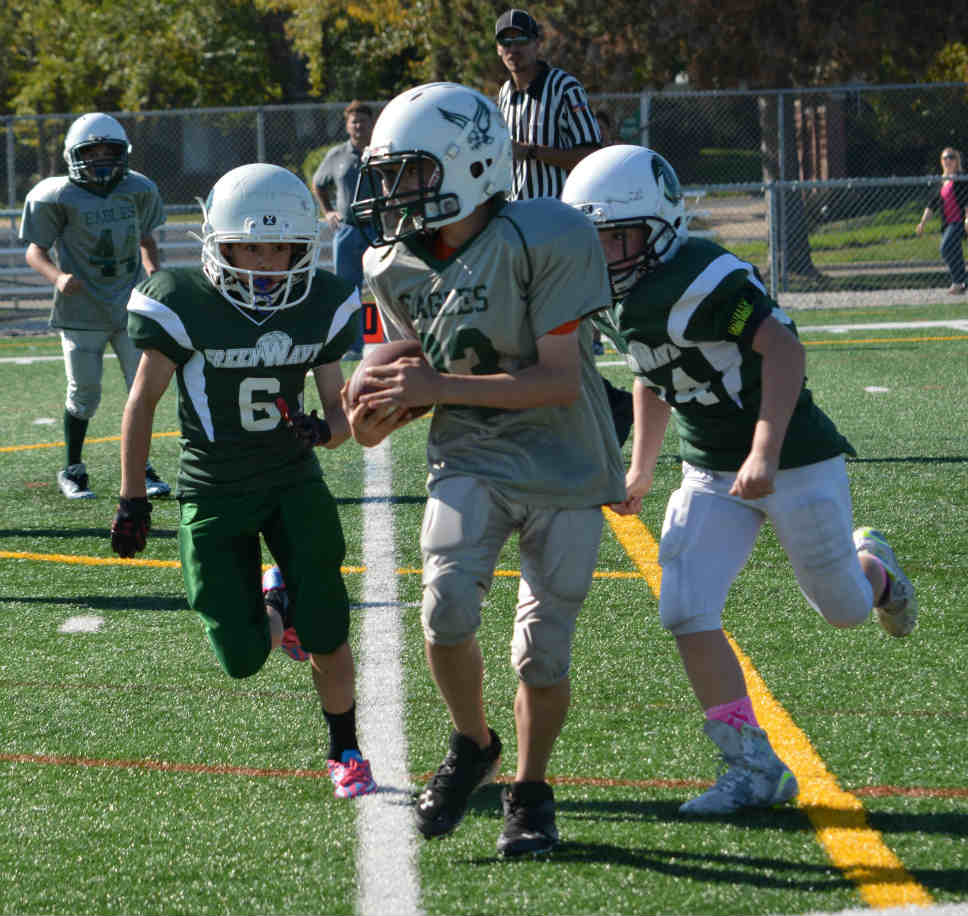 Heavyweights
Trevians vs. Norridge
— The Trevians stayed unbeaten on the season with a 19-0 victory over the Norridge Rebels on Oct. 11. Brian Dolby scored the team’s first touchdown on a quarterback scramble. A short time later, running back Charlie Finks scored on a 15-yard run up the middle. In the second half, Dolby scored on another QB keeper. He also had a PAT run. The win avenged a 31-8 setback to the Rebels last season.

Lightweights
Trevian White vs. Trevian Green
— In an intra-program game on Oct. 11, the White emerged with a 31-6 win over Green. Quarterback Ryan Kennedy was a two-way standout. Besides a leader on defense, Kennedy completed 6 of 8 passes for 110 yards and two touchdowns. Jimmy Hoban caught five passes for 97 yards. He was on the other end of Kennedy’s two TD tosses. Luke Snellback scored the team’s first TD on a one-yard run, while Tyler Hardin finished with 68 rushing yards, including a 22-yard TD. Max Dancey added a one-yard TD run, while Isaac Ko rushed for 65 yards. 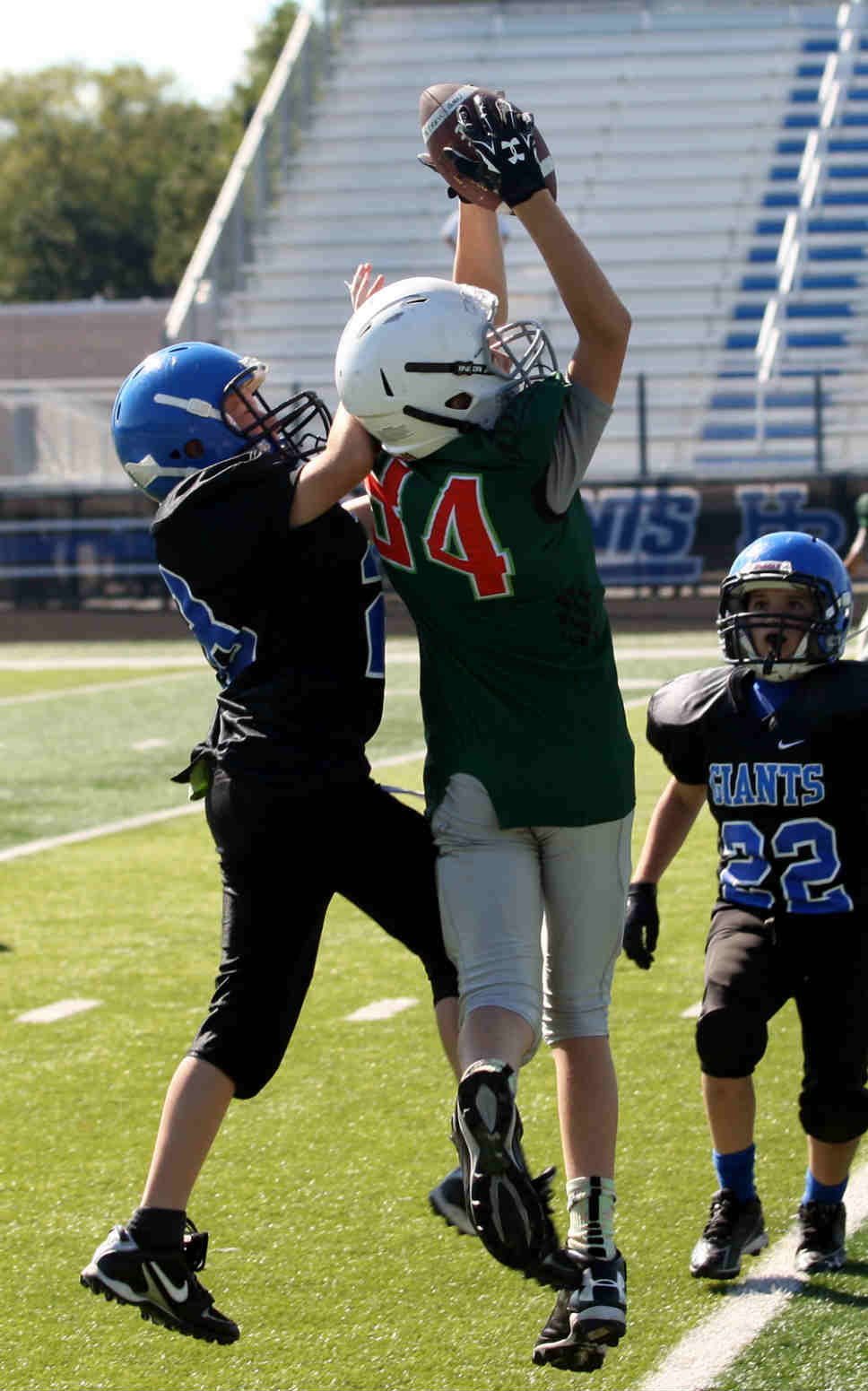 Lightweights
Trevian White vs. Evanston
— The Trevians fell to 2-2 on Oct 4 after losing to Evanston 26-8. After falling behind 6-0 on a quick strike by Evanston’s high-powered offense, the Trevians took the ensuing kickoff and marched down the field to take an 8-6 lead on a TD reception by Jimmy Hoban. The Trevians’ lead held up until early in the second half, when Evanston scored quickly again after the kickoff. Evanston scored a total of 20 unanswered points in the second half.

Player of the Week: Noah Phelps

Heavyweights
Trevians vs. Niles West Wolves
—The game started off with the Trevians receiving the ball and Chase Armstrong returning the kick to inside the Wolves’ 40-yard line. The second play from scrimmage saw Charlie Finks score on a run up the middle and with the 2-point PAT the score was 8-0. The Trevians’ defense forced a three and out, and then on the second play of the next series Charlie Finks on a 20-yard run off tackle. Another 2-point kick made the score 16-0. The Trevian defense shut down the Wolves’ offense, allowing only one first down in the first half.

In the second half, the Trevian’s second-team team offense continued to roll with Mike Stringer taking advantage of a pancake block by Tanner Peters to score on a 10-yard TD run to make 32-0. The game ended with Mike Stringer breaking through the line, evading two tacklers and running for a 90-yard TD.

Fourth Graders
Green Wave vs. Evanston
— The Green Wave won this game 12-6. Evanston scored on a 60-yard run and led 6-0 at halftime. Green Wave received the ball first in the second half and marched down in 12 plays with an 20-yard end-around run by Ben Kennon to make 6-6. On the next drive, Evanston fumbled the ball on their own 40-yard line and Green Wave recovered. Mathew Russell caught a David Finfer 20-yard TD pass. The Green Wave defense buckled down and held Evanston on its next drive and the game ended in a 12-6 victory for Green Wave.

Middleweights
Green Wave vs. Evanston
— The Green Wave (2-1) claimed a 19-0 win on Oct. 4. The first half was dominated by the Green Wave defense, holding Evanston to only three first downs. Linebackers Charlie Crowe and Luke Madigan shored up the middle, while corner backs Will Morrison and Charles Olges shut down the outside threat. Offensively the Green Wave running game was clicking. Josh Kirkpatrick scored the team’s first TD on an 11-yard run. The extra point was executed perfectly by QB Graham Mastros, who made a great fake before handing the ball off to fullback Asher Walsh just inside goal line pylon. Evanston’s next drive was short lived, 4 plays and out. The Green Wave struck quickly, Crowe, playing fullback, took the handoff up the middle and bounced to the left scooting 40 yards for another TD.

The second half started with a Green Wave turnover, but the defense fought hard stopping by the Wildcats on a fourth and short run play. Taking just one play from scrimmage the Green wave struck again, when fullback Eli Thurston sealed the linebacker and Crowe took the pitch around the right side for a 75-yard score. The remainder of the game was scoreless as both defenses played and tackled well.

Player of the week: Will Morrison

Deerfield struck quickly in the second half with another long sweep play going for 60 yards and another touchdown. The Green Wave had success driving the ball but progress ended with an interception returned for another Deerfield touchdown. Trailing late in the game, the Green Wave put together a solid drive of good hard runs and a few pass completions, getting into the end zone to avoid a shutout.

Player of the week: David Finfer

—The Sept. 20 game was a tail of two halves. The game started out a strong for the Trevians, who lost 32-12. After receiving the opening kickoff, the team marched 70 yards downfield to take a 6-0 lead and deny Lake Forest a 1st quarter possession in the process. The point after attempt was blocked.

Lake Forest stormed back to open the second quarter and quickly tied the score at 6-6. The Trevians denied Lake’ Forest extra point attempt. After turning the ball over on downs, Lake Forest again threatened. With seconds remaining in the half, the Lake Forest quarterback threaded the needle on a perfect pass to the corner of the end zone to give Lake Forest a 13-6 at the half.

The second half was not a kind to the Trevians, as Lake Forest rolled up 19 more points. The Trevian’s were unable to muster much offense in the half due to a strong defensive rush and aggressively blitzing by Lake Forest. The lone score for the Trevian’s came on a pass reception by Tyler Hardin. Isaac Ko and Tyler Hardin led the team in rushing.

Player of the Week: Tyler Hardin