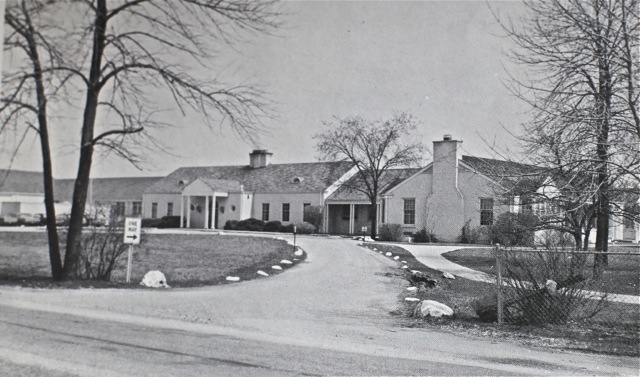 Letter to the Editor: Controversial plans to demolish Sunset Ridge elementary school in Northfield and replace it with a new building located on the playing grounds near residential housing have been unveiled on the District 29 website. Details of the plans, including a site map, exterior elevations sketches and a floor plan are available on the district’s website here.

The new proposed structure makes no “nod” to the design of the original school, which first opened its doors in 1930. That two-room school house was designed by a well known Winnetka architect of the era, Ernst A. Benkert, who is credited with inventing the split-level family home. Despite being built in the cash-strapped Depression, the interior design of the school was unique for its use of high quality wood detailing, central fireplace over which hung a portrait of Abraham Lincoln, and grandfather clock, which fascinated many generations of school children.

The visionary behind the school was one of Northfield’s most important benefactors, the late Dorothy Clark.

Over the years the school was expanded to accommodate the baby boom generation. While some of the earlier additions were in keeping with the original design template, later additions and modifications in the ’70s were less sympathetic and pleasing.

The Northfield School District agreed that the physical structure of the building needs refurbishing and improvement. The School Board voted this year on the more radical plan to build an entirely new school on the playing fields behind the existing school and demolish the current structure, including the historic two-room schoolhouse, which still sits at its core.

As word of these plans leaked out, some Sunset Ridge alumni have objected and a campaign was launched for the historic preservation of Northfield’s oldest building. Gunny Harboe, one of the top preservation architects in the country, with a practice in Chicago, toured to the school in May of this year. He was accompanied by Lisa DiChiera, Director of Advocacy for Landmarks Illinois.

Ms. DiChiera’s conclusions were sent to the District Supervisor, Ed Stange, as well as to the Architectural firm designing the new school, Wight & Company. She wrote:

“As Gunny [Harboe] said, more of the building is intact than we expected, despite being surrounded by multiple additions. If these additions were peeled away, indeed the original 1930 building could be left in place with the front façade reconstructed, but as we all know the intent is to use this location for new athletic fields. Retaining the building would mean the proposed site plan would need to be re-evaluated.

“It is conceivable the original 1930 building, once the additions were removed, could be moved to the north in the location of the new school, be linked or adjacent to the new school, have its front façade reconstructed, and serve a programmed purpose.

“Identified historic features of the 1930 school could be salvaged and incorporated into the new school. Clearly the most obvious historic interior features are the fireplace and the woodwork in the two primary classrooms. The original fanlight window is intact in the attic as well. Someone else noted the stained glass windows in the front addition to the building. Any of these features could be incorporated into the design of the new building and be given a special space to commemorate the historic school.”

None of those suggestions are incorporated in the Wight & Company newly revealed designs.

The entire project was originally budgeted for $25 million. The actual projected costs of the Wight & Company’s newly revealed design is estimated at $37 million. The School District is seeking private donations for the missing $12 million while weighing the possibility of a referendum.

Fund-raising possibilities among concerned alumni may have been damaged by the School Board and Wight & Company’s disregard for any significant efforts at historic preservation.

Initial reaction to the designs for the new school have been largely negative on Facebook social media sites (Sunset Ridge Alumni and Northfield site):

Julie Gillis Schoeberlein: “I’m not as into preservation as lots of people, but at least if they are going to take down a beloved old building, the least they can do is not replace it with a cold, out of place building.”

Yvonne Puryear Hurlbutt: “It has no resemblance whatsoever to the original 2 room school house. It is so modern and doesn’t fit into our quaint community….so very sad!”

One Sunset Ridge school Class of ’66 graduate suggested, “Just add a watchtower and it will look just like juvenile detention center.”

While everyone concerned wants Northfield school children to have the best facilities possible, how that will be achieved is still at issue.

Funding is lacking for the newly unveiled Wight & Company designs. The new siting has dismayed those living close to the school. The modern, utilitarian look of the proposed new school has disappointed many. The disregard for historic preservation of Northfield’s oldest continuously used building designed by a renown local architect has saddened others.

One of those campaigning for historic preservation is architect Pamela Gardner, granddaughter of the school’s founder and an alumna of Sunset Ridge School. In a letter to the Board of Education of District 29 and Superintendent Ed Stange, Ms. Gardner made the case for saving the historic, original 1930 two-room schoolhouse, which Gunny Harboe’s recent inspection showed was largely intact. She writes:

“I spend a good deal of my energies working toward preserving noteworthy pieces of architecture—often improving them so that they retain their relevance to modern life styles, while maintaining their status as a window to the past.

“Historic Preservation protects the irreplaceable, from beloved school houses to well known monuments so that future generations are able to experience and discover their own connection to these sites as well.

“Knowing the history around us is an important part of culture. It enhances our sense of community by protecting and preserving the memories of people, places, and events.

The old wing of SSR school is just such a treasure. Built in the 30’s, it embodies the history of Northfield. It should be preserved. I am not advocating saving the entire existing school building as it stands now–just the original core.

“Many tasteful additions compliment their historic wings while providing for the functional necessities. Look at almost any college campus and you will see examples.

“You need not compromise your educational goals and your children’s future by preserving this wing. Indeed you will enrich their experience.

Northfield has few buildings which merit architectural protection–but this certainly is one. Don’t destroy this treasure.”