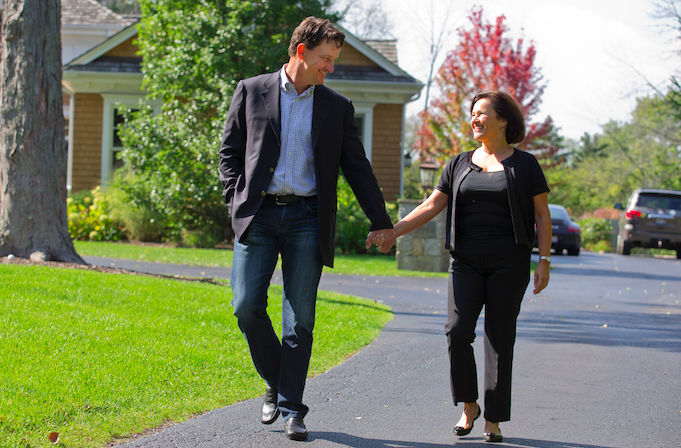 Andy and Veronica Hunt, a couple living in Lake Forest, had a friend. The friend was a grandmother. She had cancer. The simple act of eating eventually became a chore, an ordeal.

Cancer consumed and controlled her.

“She wanted to get her life back,” Veronica says.

The ailing woman, an Illinois resident, flew to Oregon last year to obtain medical marijuana from a dispensary. Her form of cancer was a qualifying condition in a state that issues medical marijuana cards to nonresidents. She ingested, in pill form, cannabis.

She got her life back, for a while. Cancer eventually claimed her.

“The last three months of her life,” Andy Hunt recalls, “were good ones, better ones. She got to enjoy Thanksgiving, her grandchildren, her life. She was no longer loopy from her pain medication.”

Andy Hunt, a retired trader for Citigroup at the Chicago Board of Trade, and Veronica Hunt, a former restaurateur, threw themselves into researching the medical marijuana business after learning the plight and brief relief of their friend. Illinois’ Compassionate Use of Medical Cannabis Pilot Program Act, under former Gov. Pat Quinn, was enacted in 2013.

The number of conditions and diseases that can qualify a patient to use medical marijuana in Illinois is 39. Among them are Alzheimer’s disease, fibromyalgia, multiple sclerosis and rheumatoid arthritis.

A doctor’s recommendation of cannabis for treatment is Step No. 1 for a patient seeking to receive a valid registration card.

The Hunts began their quest to open and run a local dispensary late last year. They received authorization to register for a dispensary in early February. On Sept. 28, the couple won zoning approval from the Highland Park City Council for a medical marijuana dispensary, named elevele, in a building under construction. Its location is 1460 Old Skokie Road.

An attorney is preparing an ordinance that will allow a special use permit to be issued for the Hunts’ dispensary, which will be called elevele.

“Our hope is that the building will pass an inspection in mid-December and be ready to open in mid-January,” Andy Hunt says. “Our emphasis will be the training of our staff. Staff members won’t be pharmacists; they’ll be patient care representatives, and our dispensary won’t have an affiliation with any doctor. The key will be listening … listening to the patients. Our patient care representatives will be there to help patients choose the right path and right products [medical marijuana in the form of buds, concentrates, infused edibles or topical creams].

“The business will be profitable, and it will benefit ill people,” he adds. “People won’t have to break the law to get relief from their conditions.”

Lake County’s first medical marijuana dispensary, The Clinic Mundelein (owned and operated by Green Thumb Industries), opened on Sept. 17. In June the Deerfield Village Board approved a petition for a dispensary license from The Greenhouse Group. Its location, 151 N. Pfingsten Road, is three miles from elevele. Under Illinois’ medical cannabis pilot program, patients suffering from a qualifying condition will be able to legally buy up to 2.5 ounces (70 grams) of medical marijuana every two weeks.

Both Hunts, North Shore residents since 1999 and Lake Forest denizens since 2007, know there is a stigma associated with marijuana, no matter the context. Marijuana is, after all, classified as a Schedule 1 controlled substance, along with heroin, cocaine and other narcotics, by the federal government. Both Hunts also see the presence of dispensaries and the accounts of marijuana as a palliative medicine gradually eroding the stigma. It is legal to use medical marijuana in 22 other states, four (Alaska, Colorado, Oregon and Washington) of which also legalized the recreational use of the drug. Marijuana is legal, medicinally and recreationally, in Washington, D.C.

“Patients want a place that is legal and welcoming and elegant,” Veronica Hunt, an alumna of St. Ignatius Prep School in Chicago, says. “They’ll find that [at elevele]. They will also feel safe and receive information, important information, from well-trained professionals.”

The security at elevele will be Fort Knox-ish. Only people with valid registration cards — as well as staff members, including a dispensary agent in charge — will be allowed to enter the building. A patient, after receiving a treatment recommendation (not a prescription) of medical marijuana from a doctor, must provide specific forms of identification and fingerprints in order to secure a registration card. The marijuana must be grown in Illinois. Patients won’t be allowed to ingest the medication on the premises of the dispensary or around anybody younger than 18. And each patient will be advised to place the child-proof packaged medication in the trunk of the patient’s car on the way home.

“Security … that also will be a heavy emphasis at our dispensary,” Andy Hunt, a graduate of Sullivan High School in Chicago, says. “We’ll have video surveillance there, 24/7. If a photographer from a publication wants to take pictures inside, after we open, we’d have to decline the request. We talked about our security plans with the Chief of Police in Highland Park, with the fire department, and both were fine with it.

“We want the community to feel comfortable about [elevele], about medical marijuana. We realize not everybody fully understands the issues involved here, but there are so many upsides to this. We’ve heard stories, countless stories, from people who have seen the benefits of this, the relief it brings.”

“What I like about the Illinois law is that it combines the best parts of the laws from the other states that allow medical marijuana,” Andy Hunt says. “I know exactly what we need to do to keep our license and to keep the community safe.”