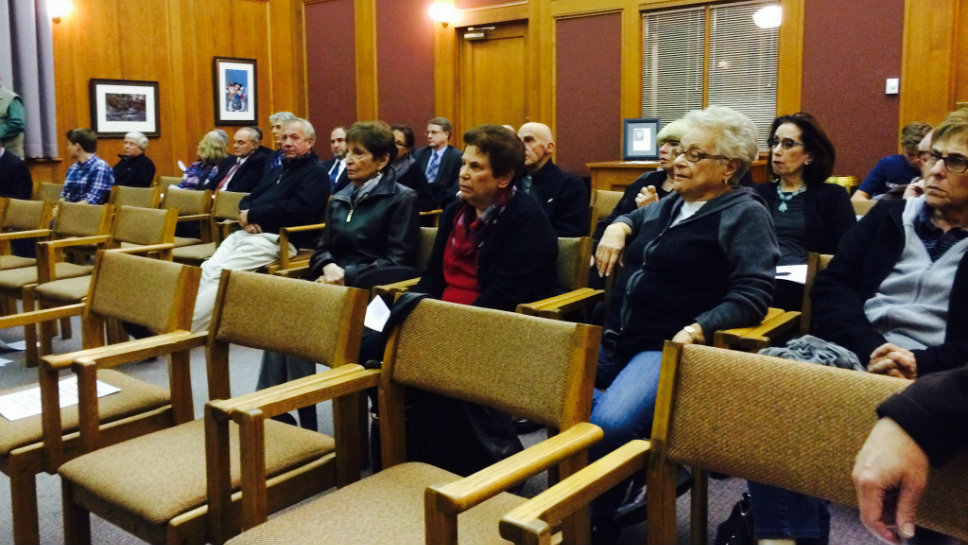 Northbrook residents opposed to a housing development on the Mission Hills Country Club golf course showed up in force at the Oct. 13 meeting of Northbrook’s Village Board of Trustees.

NORTHBROOK – Amid protests from nearly a dozen residents, Northbrook’s Village Board of Trustees approved a 137-building planned unit development on the grounds of Mission Hills Country Club by a 5-1 vote during its regularly scheduled meeting Oct. 13 at Village Hall.

Despite the village’s approval, the developer still has several hurdles to clear before it can begin turning an 18-hole golf course in unincorporated Northbrook on Techny Road into 82 townhomes, 34 duplex units and 21 single family homes leaving nine holes for golf.

The developer, Red Seal Homes of Northbrook, still needs a nod from the Village of Glenview, a final approval from the Cook County Board of Commissioners and resolution of litigation between Red Seal and Mission Hills’ homeowners.

Northbrook’s role is limited, according to Elrod. He said municipalities within 1.5 miles like Northbrook have a limited role.

“The Village of Northbrook can only review to make sure the development falls within its zoning standards,” Elrod said. “That is the only thing within the jurisdiction of Northbrook.”

Elrod said to the extent the project does not meet the village code, Northbrook can grant variations, which it has. Additional towns that have a say are Wheeling, Prospect Heights and Glenview.

Wheeling and Prospect Heights have already said yes, according to Thomas Poupard, Northbrook director of development and planning services. Glenview will consider the request at an upcoming meeting, according to Red Seal spokesman Max Bever.

Northbrook’s limited role did not stop residents from asking the village to turn the project down, paying little heed to the fact the Cook County board will have the final say. They asked for a rejection of the variations.

“Red Seal is creating many violations,” said Karen Jump of Northbrook. “The (variations) will have a disastrous effect.”

Poupard said the variations involved cul-de-sacs that are smaller than the zoning code permits, but he said the Northbrook Fire Department assured there was sufficient access.

Bonnie Spangler of Northbrook said the entire process discriminates against many of the senior citizens who live at Mission Hills because it is difficult to attend meetings to present their views, particularly in Chicago where the Cook County board meets.

“We’re looking at a decline in property values for the homeowners and Red Seal is looking at a windfall,” Spangler said. “Mission Hills (Country Club) is an open space, which should be preserved.”

Red Seal President and CEO Todd Fishbein said he was thankful the project is another step closer to reality.

“Over the last year, we have worked extensively with village staff to review the plan thoroughly under the village’s subdivision regulations, resulting in unanimous approval from the Plan Commission after a comprehensive public process,” Fishbein said in a statement Oct. 15.

Those cases were consolidated July 13 when Red Seal asked the court to dismiss the litigation, according to court records. On Oct. 14, the court continued all matters until Nov. 12.