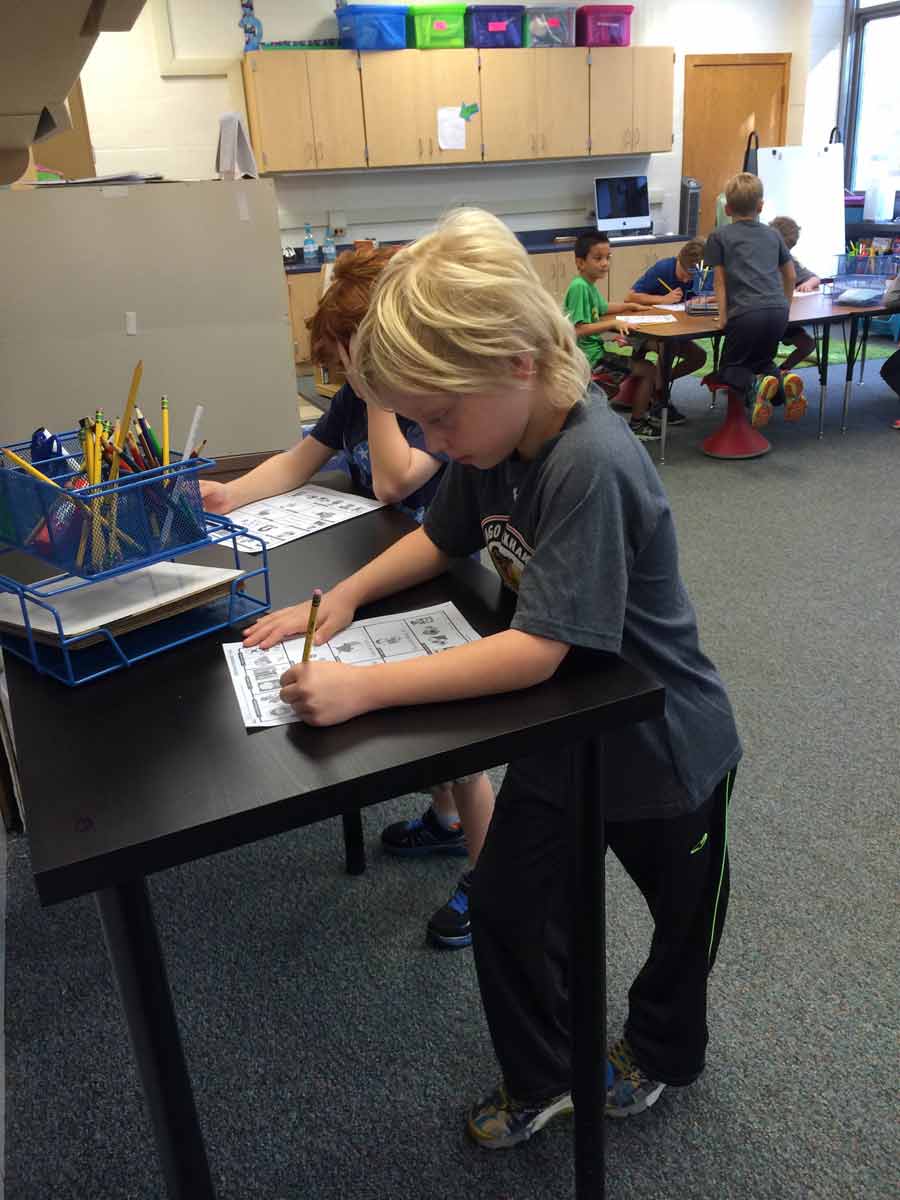 WILMETTE – Two second grade classrooms at McKenzie Elementary School are testing flexible learning environments that enable students to sit, kneel, rock or stand while doing their work. Teachers Erin Schroeder and Gwen Faulkner are piloting the new classroom, inspired by the learning commons that recently made its debut at Central Elementary School.

Following the mantra “sit, stand, kneel, just learn,” Schroeder and Faulkner encourage their students to pick a spot in the room where they will do their best learning. Students can choose to kneel at a low table, sit in rocking stools or chairs on wheels or stand at a taller table. The classrooms also offer a table with traditional chairs.

“I think it sends a really good message to kids that they can make these decisions for themselves,” Faulkner said.

Principal Dr. Denise Welter proposed the idea to Schroeder last year, after discussing the future plans for a learning commons at McKenzie. District 39 currently has plans to slowly roll out flexible learning spaces at each of Wilmette’s school libraries, including the middle school and junior high. 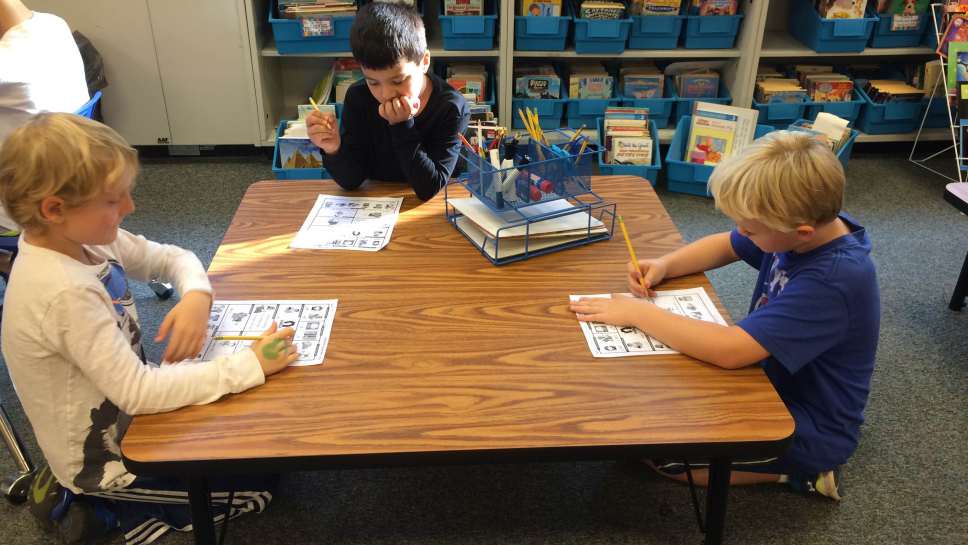 Dr. Welter and Schroeder were intrigued by the idea of a flexible learning space and sought to take that concept into the classroom. “We really wanted to see what it would be like if the kids lived in this environment and not just visited it [at the library],” Dr. Welter said.

Schroeder was immediately interested, having expressed her view in previous years that traditional desks could be a hindrance to learning. Faulkner also got on board enthusiastically, and the teachers plus Dr. Welter and Assistant Principal Julie Anderson visited Highland Park’s Braeside Elementary School, which had already implemented this concept in its kindergarten and first grade classes. 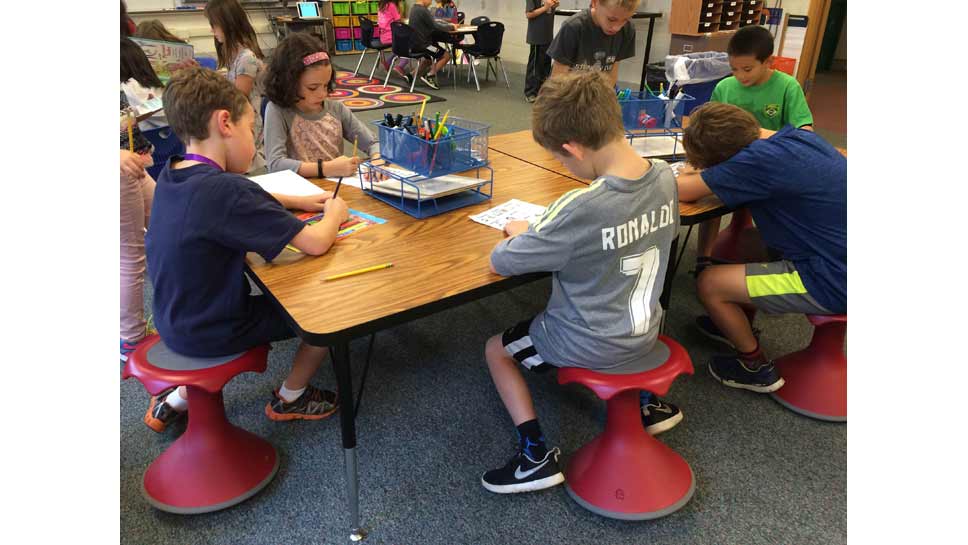 At Braeside, the educators observed for a day and witnessed flexible classrooms in action. Seeing five and six year old students independently navigating a classroom that was designed to be completely accessible inspired the teachers. Faulkner and Schroeder returned to Braeside another day and asked the teachers for ideas. Over the summer Schroeder, Faulkner and Dr. Welter collaborated to redesign the classrooms in this new model.

The teachers pointed out all of the changes that were made to make the classrooms centered around seven and eight year old students. In addition to replacing the desks with tables, the Smart Board was lowered so that students can easily reach it, while all of the supplies are stored in low cabinets accessible to the students. Students store their workbooks, folders and reading supplies in cubbies designed by Dr. Welter. Making students responsible for getting their own supplies “frees the teachers up to do more teaching,” Dr. Welter explained.

Not only were the students’ desks removed, but the teachers had their own desks removed, opting instead for a rolling cart that holds their supplies. Both Schroeder and Faulkner agreed that they don’t miss their former desks, which were rarely utilized and took up space.

The teachers had also observed that the Braeside classrooms were visually very clean. Instead of decorating the classrooms with a lot of visuals, Schroeder and Faulkner deliberately opted to keep the walls relatively empty.

The new classrooms have a lot more open space. The students are able to easily move together and collaborate in teams, or separate and work independently when necessary. The teachers think a classroom without desks is a wonderful alternative, finding that cubbies encourage students to be more organized and spend less time fidgeting in their desks.

And Dr. Welter noted that while the space may have changed, the teaching remains the same. “Teaching hasn’t changed but it is creating an environment that fits with the purpose,” she said. 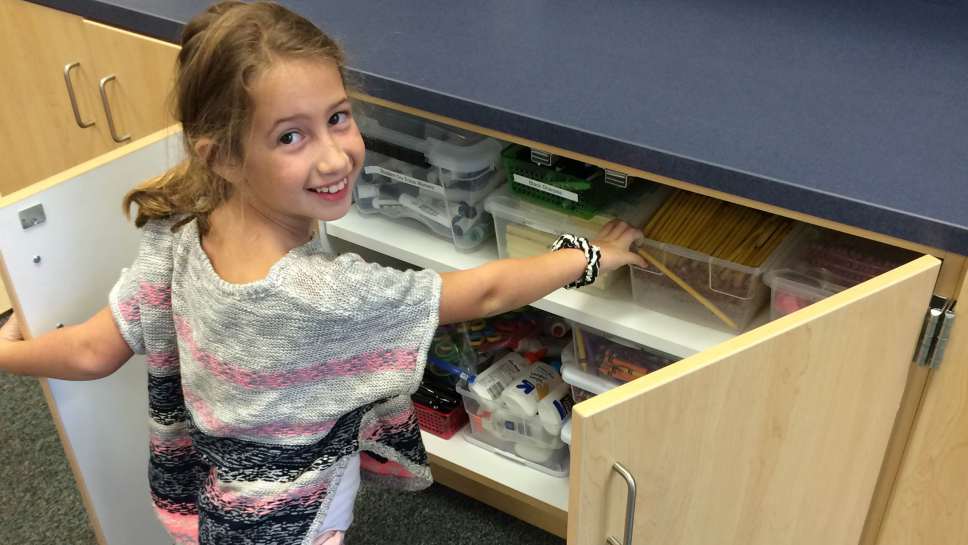 A student accessing supplies in a low cabinet.

The flexible classroom model aligns with McKenzie’s goal to teach students the characteristics of successful learners, Dr. Welter explained. While students are encouraged to self-advocate for themselves in the classroom, creating a space for students to independently navigate serves that same goal.

At this stage, Schroeder and Faulkner will continue to watch and take notes on how their classrooms evolve over the course of the year. While there are no plans on the books to expand this model to other classrooms at McKenzie, the classrooms serve as lab for professional development. Other teachers from McKenzie and throughout the district have visited the classrooms and Dr. Welter plans to hold staff meetings in the rooms to inspire other teachers to consider how to create new learning opportunities for their students.