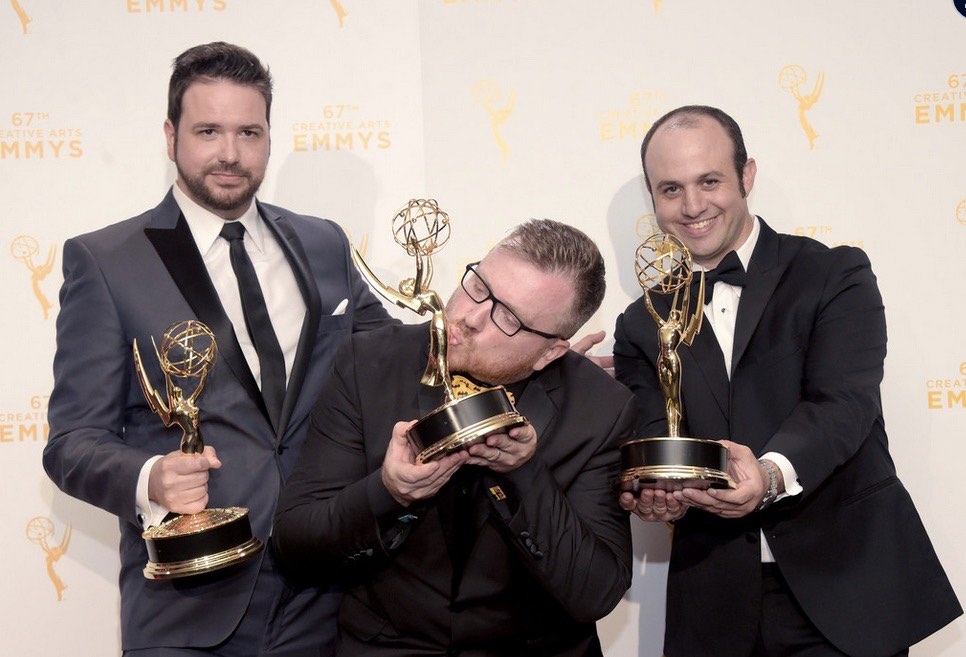 NORTHBROOK – For Northbrook native Alexander Rubinow, the road to becoming an Emmy-winning TV editor started with family movies on his father’s Super 8 camera.

Fast-forward 25 years and the Glenbrook North alumnus has turned a childhood passion into a Hollywood career. But not without some detours and major paying of dues.

“People sometimes ask how to get into the entertainment business,” shared Rubinow, who worked unpaid internships and night gigs to get his foot in the door. “From what I have learned, you have to be humble and you cannot be afraid to take a step backwards because it could lead to many steps forwards.”

On Sept. 12, Rubinow took one very large step forward when he, alongside colleagues Alex Durham and Josh Earl, accepted a Creative Arts Emmy for their outstanding editing work in the reality-programming category. The trio was honored as part of the technical awards for the season premiere episode of the Discovery Channel’s “Deadliest Catch: A Brotherhood Tested.” Rubinow has worked on the series – which brings in three-to-four million viewers per episode – for six seasons.

Here, Daily North Shore talks with the homegrown talent about his recent win, why he loves what he does and the thing that forever makes Northbrook feel like home.

DNS: Winning an Emmy is not something most people get to do! What did it feel like?

AR: It was one of those moments like seeing your child born or getting married or graduating college – it is hard to verbalize but it was spectacular to say the least. And to have my parents and sister and wife there to witness it was truly wonderful. And it is forever.

DNS: What is best/most fun thing about working on “Deadliest Catch”? Why is it such a cool show?

AR: It is incredibly gratifying to work on a show that is so well loved and acclaimed and admired. I look forward to work and creating something new every single day at Original Productions. I love telling the stories of the fishermen we document and following them through the years, through their ups and downs.

DNS: Breaking into TV, whether you’re on-screen or off, isn’t easy. How did you make your way from Northbrook to L.A.?

AR: Coming out of fifth grade, the video production summer-school class at Northbrook Junior High just spoke to me. I enjoyed [production] to such a degree that it became like there was nothing else I wanted to do or be. This was it. I had found something I was truly passionate about.

After college, I sent my resume out to everyone in Chicago, anything that had call letters: post houses, production houses, TV shows at the time. After a few unpaid internships, I was still putting feelers out to places in L.A. A contact I had made years earlier at Paramount had a lead for me and I got a job logging tape for an MTV show called “Fraternity Life.”

I moved out with two suitcases and was living at my great uncle’s house. The job ended after three months, but it lead to a job on Project Greenlight Season 2 on HBO and then another job on “Modern Marvels” for the History Channel.  I worked for the company that made Modern Marvels, Actuality Productions, for nearly six years, starting as a Post Production Assistant and working my way up. I had my first editor credit on television in 2008.

AR: I was definitely influenced by the knowledge that John Hughes had grown up in my hometown, made his movies in my hometown and attended the same high school as me. This lit a fire, and inspired me to delve into his world a bit.

I am influenced and have always been influenced by my parents. By their drive and passion for what they do and it drives me to be the best that I can. And my teachers. Vince Pinelli at Glenbrook North High School, and Franklin Miller at the University of Iowa. They were able to guide me and teach me the fundamentals of what I do now for a living. When you are in school, you are essentially a one-man-band in your projects. But what I realized very quickly was I liked editing the best.  I liked putting it all together at the end, and I got such a sense of satisfaction when it was all finished and I could show it to an audience.

DNS: Do you live out West full-time? How does the SoCal lifestyle compare to Northbrook’s Midwest roots?

AR: I live with my wife and my three-year-old son in Los Angeles.  We love Chicago and go back as often as we can – three-day-weekends and holidays, or other special occasions. Northbrook still feels like home. In L.A., I almost never wear a jacket; we can do outdoor activities all year round. But we miss the seasons changing in the Midwest: the leaves changing colors; bundling up to go out into freshly fallen snow.

DNS: What part of editing television programs do you find most rewarding? Have you worked on other projects that make you especially proud?

AR: The most gratifying part of working in TV is that I love doing it and I love hearing people’s feedback.

Outside of “Deadliest Catch,” some other highlights of my career have been the Sundance Award Winning feature documentary, “Waiting for Superman,” the HBO series “Project Greenlight,” which has just come back for a fourth season, and my first credit on MTV’s “The Real World.” Also, the History Channel series, “Modern Marvels,” for which I worked on 269 episodes and the Joe Mantegna film, “Uncle Nino,” which shot around the Northshore of Chicago in the summer of 2002.

AR: I am about to start my second episode on the fifth season of Discovery Channel’s “Bering Sea Gold,” which should be on the air in coming months. I also am excited about a brand new show I worked on called, “The Yard” for National Geographic. I edited two episodes of that – one of them being the series premiere – and it should be coming out spring 2016.

DNS: Outside of your professional life, what are your three favorite things in the world?

AR:  My family, my family and my family. (And the Cubs-Bears-Bulls-Blackhawks-&-Hawkeyes)!

Author’s note: responses were edited for space, clarity and consistency.