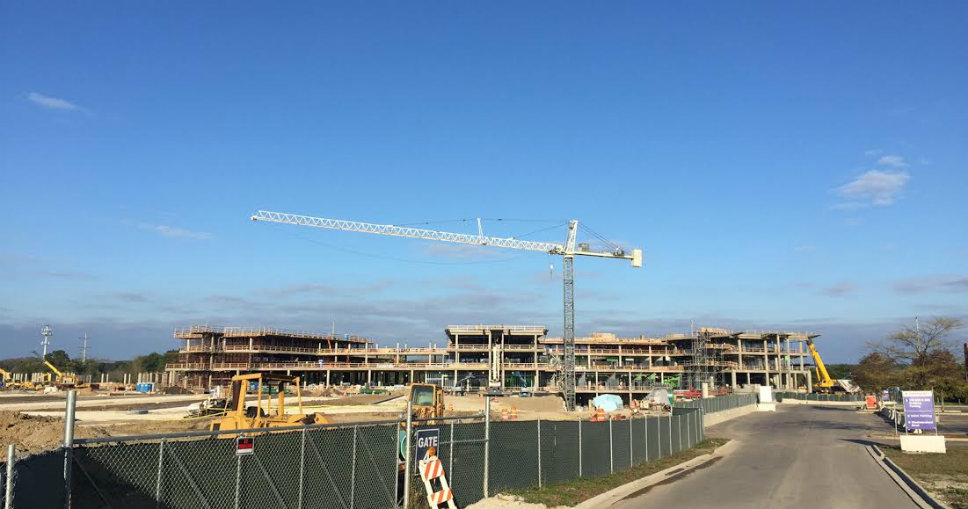 LAKE FOREST – Completion of $392 million worth of improvements and renovations to Northwestern Medicine Lake Forest Hospital are approximately two years away as construction continues on schedule at the campus just east of Highway 41 and north of Deerpath Road.

While the changes to passersby on the highway appear primarily physical, the project is primarily intended to create a 21st century facility to accommodate the medical upgrades which have been going on for the last five years since Northwestern got involved, according to Tom McAfee, the hospital’s president.

“We have recruited top physicians in a variety of medical and surgical sub-specialties; including neurology, neurosurgery, oncology and interventional cardiology,” McAfee said. “Northwestern Medicine Developmental Therapeutics Institute now offers cancer patients access to some of the most advanced clinical trials in our new infusion center.”

The hospital also officially became Lake County’s only teaching hospital over the summer when it welcomed its first class of eight residents in family medicine, according to McAfee.

There have been technological advances as well, McAfee said. They involve both medical and business changes.

“We have developed the most advanced Di Vinci surgical robotic system in the market and continue to make investments in our electronic medical record system,” McAfee said.

To keep on schedule getting everything done by autumn 2017, McAfee said the builders plan to have as much pre-cast work done as possible, the roofs installed and windows put in place on the five pavilions of the new building before the first snow. Installation of these features will continue in the winter and spring.

When done, the new 499,605 square foot facility will have 114 private inpatient beds and 72 outpatient spaces as well as eight operating rooms.

“This is a new hospital in every way,” McAfee said. “The space is energy efficient. Within two years it will all be occupied.”

The two existing hospital buildings will remain and be repurposed to house more administrative functions, according to McAfee.

“We are in the process of working through those plans,” McAfee said. “Some of the old facilities have reached their obsolescence. Some of it will be used for administrative and human resources support.”

Before the project is complete there will be work done to the campus itself which will include replacing trees and maintaining open space including 7,000 feet of pedestrian and bicycle paths, according to McAfee.

“We’re going to replant 660 trees on the campus,” McAfee said. “The redesigned 160-acre campus will include 116 acres of open space.”

Plans for the project have been underway for more than four years. The Lake Forest City Council approved the hospital’s special use permit in May, 2012, and gave the nod to the final plan early last year.