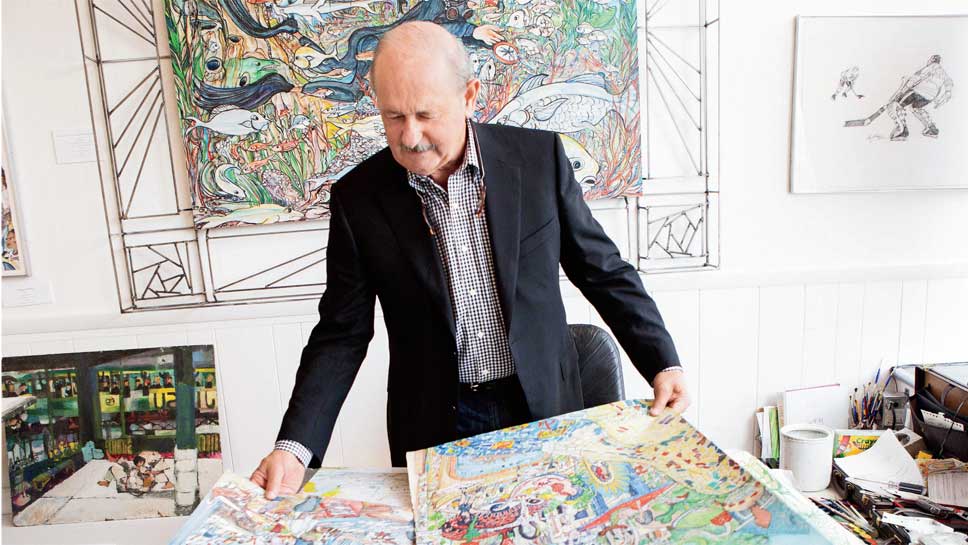 Except that’s just what it is in the case of the McMahon family, longtime North Shore residents and internationally acclaimed artists.

Mark McMahon and his late father Franklin take top billing this year as part of the Lake Forest-Lake Bluff Historical Society’s popular “Local Legends” series, following in the footsteps of other successful residents including James Lovell, Richard Marx, and Bill Kurtis. This year’s event takes place on Saturday, October 24 at the Gorton Community Center where Mark will be interviewed by Bill Kurtis.

The accolades are well deserved. A visit to Mark’s family gallery is all it takes to witness history through the arts, and the magnitude of the events the McMahons have covered through the years. It was lingering in the shadow of his father that Mark got his start in art—and what propelled him toward the only career he’s ever desired.

A Family Style
The McMahon artistic niche is primarily in covering national and international events—famous trials, NASA launches, and sporting events, for example—by painting them. “It’s a family style,” says McMahon. “My father did this kind of work and I started working with him when I was 10 years old.

“We (McMahon and his siblings) were all involved in this kind of activity so it’s a family business and it’s what we’ve always done,” he says, emphasizing the role that early art classes with organizations like the Deer Path Art League played in his development of the craft. “I started figure drawing with my brother when I was in seventh grade and he was a freshman.”

Being in such close proximity to his father’s work made it easy to fall in love with the medium. “It was not only his work,” he says. “It was also the lifestyle. We’re known as artists documenting subject matter that’s relevant. (My father) was always covering subjects in Europe and he brought that back to the U.S. He was curious about politicians—he was always traveling with a presidential candidate.”

It was his work in 1955, covering the Emmett Till trial for Life magazine, that cemented McMahon’s work in the national landscape—work that now resides at the Chicago History Museum.

“It is a niche and we’re sort of known all over the country—we’re the only ones,” he says.

Taking to the Sky
Franklin McMahon covered the space race in the late 60s and early 70s, and Mark has followed suit in similar fashion, having produced work commissioned by top military brass.

“I did the Thunderbirds (flying over Chicago) for the Secretary of the Air Force,” McMahon shares. It’s a love he still harbors, having most recently spent time on a friend’s boat covering the Chicago Air and Water Show.

McMahon’s art begins primarily as pencil sketches. “I work on location so I carry a pad of paper. It goes on my lap and I have pencils … then I bring those back to the studio and I use watercolor and acrylic to paint it.”

Some of his work is transferred to tile, as with murals at Lake Forest area schools including Everett School in Lake Forest and Lake Forest High School.

Thriving Amidst Technology
In today’s world where news events are reported to the tune of instant gratification, McMahon’s medium would seem to be in peril. In his father’s time, a number of artists came into the profession as a result of the GI Bill. “A lot of these guys went to art school where they were trained to do artwork. Jackson Pollack and the like came from those groups of people.”

Since then, “The computer has changed the world,” he says. “Here in the editorial world, everybody carries a camera.”

Photojournalism is now within reach of anyone with a smartphone. “They don’t value the image like they used to—that’s all gone. But one day, who knows when that is, someone will ask, ‘Where have all these guys gone?’ And what’s going to happen is there is only going to be a few standing.”

McMahon’s key to surviving—and even thriving—is to continually look for the niche. “There’s a constant changing of where the work is,” he says. “The trick is to find where the niche is and plug in. I just did a series of drawings and paintings for Notre Dame. The work is still there and if it’s not, you assign yourself.”

Local Legends with Mark McMahon (interviewed by Bill Kurtis) will take place Saturday, October 24, at 4 p.m. at Gorton
Community Center. Tickets are $75 each. To purchase tickets, visit lflbhistory.org, or call 847-234-5253.

This story originally was published in Forest Bluff’s October Issue.