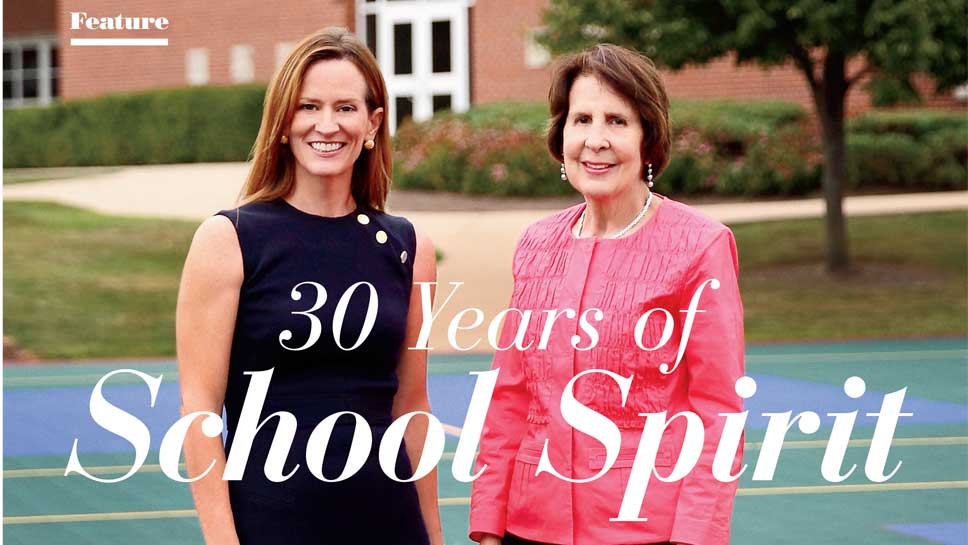 The Spirit of 67 Foundation is still going strong after 30 years, raising additional resources for school district 67.

The Spirit of 67 Foundation (Spirit) is most lately known for their exceptional spring home tours. For one day each year, they open the doors of gorgeous architecturally or historically significant Lake Forest homes for tours from the public while raising money for all four schools in district 67—Cherokee, Everett, and Sheridan elementary schools and Deer Path Middle School. Though the home tours only started in 2002, the Spirit is celebrating their 30th anniversary of helping district 67 schools with supplementary financial support.

“It’s thrilling that the foundation is still such a viable part of the community and provides so many different opportunities for children in district 67,” says Susanna Bunta, a founding member and the first Projection and Planning Committee Chair for Spirit. “I certainly commend the community for continuing to support the Spirit of 67 Foundation all these years.” Prior to 1985, the Association of Parents & Teachers took it upon themselves to raise additional resources for their schools by selling items like sweatshirts with school names emblazoned on them. But after removing the cost of manufacturing the sweatshirts was accounted for, the $16,000 dollars they raised only amounted to $4,000 for the schools. $1,000 per school.

“All that money went to the company,” says Dorothy Chantler, founding member and first President of Spirit. “We thought—‘People can buy their own sweatshirts. We know there’s money out there. How do we get it and make it tax deductible?’ Nobody had served on a foundation then, they were pretty new. We wanted to make sure that anything the school district could not pay for, if it would enhance our kids’ education, we wanted to provide it in a way that the community could support.”

Named after a district wide talent show that took place a few years earlier, where the collective talents of all four schools were brought together under one roof, the Spirit of 67 began as a letter writing campaign mailing requests for support to everyone in the district. They then targeted specific district goals, raising money for science labs, gyms, and locker rooms. For a couple years they raised funds by recognizing exceptional
educators within district 67. When the home tour was proposed in 2002, they knew they had locked into something special and they made it an annual event. They’ve since established other community participation-oriented fundraisers as well, a golf outing that turned into an annual luncheon and auction, a faculty talent show, a family Cubs game outing, and the Spirit of 67 vehicle sticker program.

Over the past 30 years, with the support of the community, the Spirit has raised more than $3.9 million, which they’ve disseminated through a grant application process. They’ve funded grants for technology, enrichment programs, workshops, supplemental curricular materials, guest performers and speakers, playground equipment, family assistance, performing arts programs, and more.

Instead of the annual luncheon this year, the Spirit is hosting two new events. “Raise Your Hand for Education” an online auction open October 13-16 in the days leading up to their first Barn Dance Benefit on Saturday, October 17. With a farm-totable dinner, Americana-bluegrass band Wheelhouse, and a live auction, “Kick Up Your Boots for Education” is set to be a memorable night out.

“It’s an attempt to include spouses and get the whole community out, because we haven’t had something like that in a long time,” says Molly Sarver, current Spirit President. “We’re going to have a big bonfire and a live auction for the first time, we’ve never done that before.”

The Spirit of 67 may have been named for the collective spirit of the students throughout the school district coming together to showcase their abilities, but it’s also synonymous with a spirit of reinvention. Every few years they come up with new ways to reach out and reengage the community in their cause, from the home tour to the golf outing to the luncheon and now the barn dance. It’s an inspiring reminder that in order for our school district to progress, we need to continue to innovate and renovate.

“It’s been really rewarding to go back and look at the initial mission from 30 years ago and see how we’ve stayed true to the goal, which was to enrich the cultural and educational experience of all the students and faculty in the district,” says Kathy Ivinjack, current Vice President of Grants for Spirit. “The original chair of the grants committee and I just got together at one of our biggest grants awarded, which was last year, this big
sports court outside of Deer Path Middle School. It was a really cool grant that was written by some of the eighth grade students and the gym teacher. It’s a great example of the opportunities that the community has helped us provide.”

For more information on the Spirit of 67, the barn dance, or the upcoming online silent auction, visit spiritof67foundation.org.

This story originally was published in Forest Bluff’s October Issue.