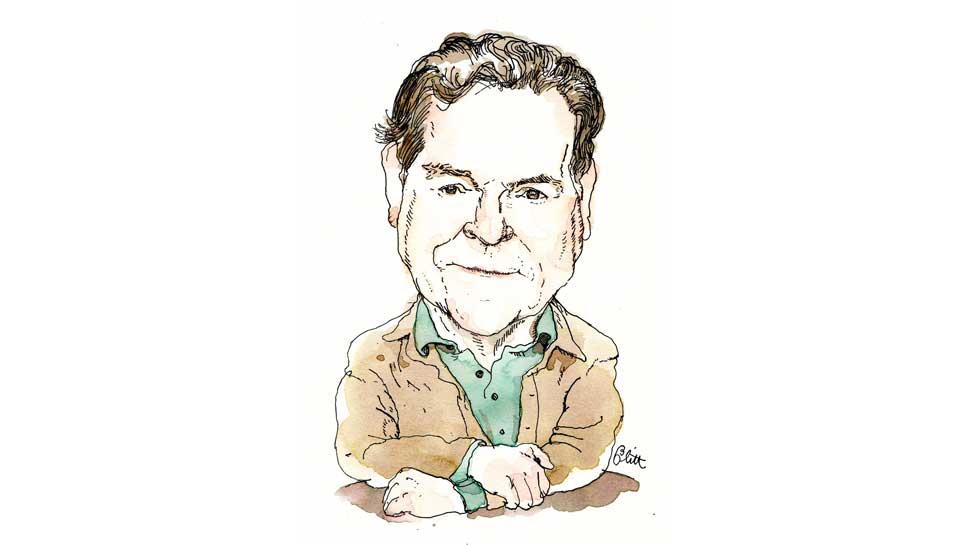 Evanston resident and former Saturday Night Live star finds humor starring in Northlight Theatre’s Funnyman about an aging comedian trying to find his second act. Yet for him, the curtain has never really closed.

“Funny man” is a title that’s often been reserved for actor Tim Kazurinsky, but starring in the new production with the name Funnyman at Skokie’s Northlight Theatre gives it a whole new spin. In the story, written by playwright Bruce Graham, Kazurinsky stars as the agent of a maturing comedian (played by pal George Wendt) trying to find his second act in the hopes of reclaiming the infamy he once had. It’s loosely inspired by the careers of Buster Keaton and Bert Larr, but as Kazurinsky would admit, it also mirrors himself.

“It definitely resonates,” he admits. “Here I am in my 60’s and still working and doing interesting new projects.” In the ‘80s, Kazurinsky was unmissable as Carl Sweetchuck in the Police Academy films and as one of the regulars on Saturday Night Live. His trademark characters, like Madge the Chimp’s Husband on the soap opera sketch “I Married A Monkey” and the grimacing pun doctor Jack Badofsky on “Weekend Update” gave him wattage in an ensemble that also produced stars Eddie Murphy, Joe Piscopo, and Julie-Louis Dreyfus.

Though the ’81-’84 seasons he was on were considered some of SNL’s overcast years, the time when producer Dick Ebersol ran the ship after Lorne Michael’s temporary departure, Kazurinsky made a name for himself and was recently ranked by Rolling Stone as number 32 of all 141 cast members upon the show’s 40th anniversary this past spring.

“It shocked the hell out of me,” he admits. At the time of publication he was touring with the musical Wicked in the role of the Wizard of Oz and some of the cast members taped the article to his dressing room door. “I got some new found respect with the kids on the tour who hadn’t even been born yet when I left the show.”

In recent years, live theatre has become a newfound passion for the actor and former screenwriter, one that has given him considerable new cred. Encouraged by his actress wife Marcia and after first getting the bug starring with Wendt in The Odd Couple several years ago, Kazurinsky made his Broadway debut in an Act Of God alongside Jim Parsons last May and says “I forgot how much fun it was.”

The trade puts him back to his roots as an improv actor and alumnus of Second City where he was more or less discovered by John Belushi after some happenstance circumstances. A native of Australia, Kazurinsky moved to the States by himself a week after his 16th birthday. He worked for a time as a young reporter for the Johnstown Tribune-Democrat and eventually found his way to Chicago in 1968 at the height of the Democratic National Convention, which was “the center of the universe and an exciting place to be. I never left,” says the now settled Evanston resident. His early love for reporting was the catalyst for the “Salute To Journalism” sketches on Saturday Night Live, that mocked executive Rupert Murdoch, and which are curiously now absent from the show’s archives. His work in journalism soon turned into a copywriting position for Leo Burnett, where a fear of presenting ad pitches led Kazurinsky to seek out improv classes.

“It was nerve wracking to play Don Draper and get up there and sell your commercials, so I thought I’d take class at Second City, hoping that would get me over my nervousness,” he recalls. “They offered me a job to actually be in front of people so I overcame my fear pretty well I guess.”

Kazurinsky is the first to admit that his story, rare as it is, is all about “luck … if you told today’s young actors that I did not have to audition for Second City or Saturday Night Live they would freak out and want to strangle me.” Yet much like returning to the fold in Funnyman has reminded him, comedy is all about the timing, he says. “When opportunity knocks, it doesn’t hurt to be prepared.”