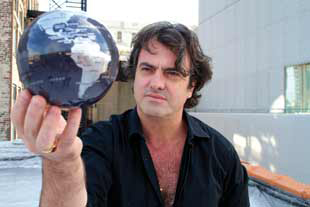 One World One Week One Festival Founding Director-Nicholas Mason. Photo By CyCy Sanders

WILMETTE – Wilmette Theatre will host the 18th annual MANHATTAN SHORT Film Festival, screening this year’s 10 short film finalists from September 25 through October 4. This is the world’s first global film fest bringing together the most creative short films in the world. More than 100,000 film lovers in over 250 cities across six continents will gather in cinemas, museums, and universities for one purpose … to view and vote on the Finalists’ Films. The Wilmette Theatre is the only host in Chicago.

The MANHATTAN SHORT Film Festival, celebrating its 18th year, is now arguably one of the largest in the world.

What is MANHATTAN SHORT?

Established in New York City in 1998, the MANHATTAN SHORT receives over 600 short film entries from over 45 countries a year. Ten of these entries are selected as finalists in our annual Festival. This Festival is not just one of the largest short film festivals in the world, it is the world’s first global film festival, a global celebration and we are inviting you and your community to become part of it. Audiences from around the world gather not only to view the films, but to vote on them as well.

You Be the Judge! Audiences from around the world are given the opportunity to unite with other audiences not only to view these films, but to vote for the ONE Film they think is best. Patrons of the Wilmette Theatre will have an opportunity to cast their vote after the screening and MANHATTAN SHORT HQ will announce the winner in New York City on Sunday, October 4th, at 10:00 PM (EST). With past Finalists from this Festival going on to be nominated and win Oscars in the short film category, MANHATTAN SHORT is, quite simply, a collection of some of the best short films currently screening in the world today.

According to Nicholas Mason, founding director of the festival “. . .unfailing enthusiasm for brilliant films and most of all the participation of the public throughout the world, have made MANHATTAN SHORT become what it is today. As one reporter called it, it is ‘The World’s most people powered Film Festival.’ That reporter got it right.”