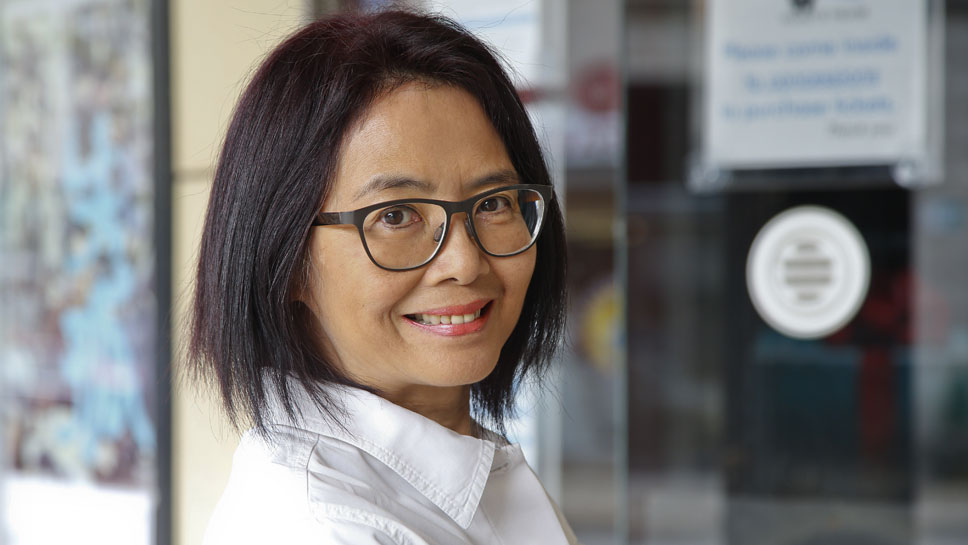 It’s difficult to imagine anyone better suited than Sophia Wong Boccio to create and curate the bi-weekly Asian Pop-Up Cinema series showcasing an assortment of Asian language films, both current and contemporary.

The Hong Kong-born daughter of Wong Tsao-she, the Motion Picture and General Investment Company/Cathy Studio’s award-winning editor, and Sil-Metropole Organization Ltd. actress Yu Wan-fei, Boccio grew up on studio sets. Boccio’s love of and interest in film continued into the 1990s, when she launched the “Sophia’s Choice” movie series in Beijing and later became the managing director of the Chicago International Film Festival from 2000 to 2007.

Asian Pop-Up Cinema runs through Dec. 4 at the Wilmette Theatre, 1122 Central Avenue, as well as at the AMC River East 21 in Chicago.

Gregg Shapiro: Sophia, your mother, Yu Wan-fei, was an actress. Do you have a favorite film of hers and if so, why is that movie a favorite?

Sophia Wong Boccio: The word for word translation of the Chinese title 王老虎搶親 /Tiger Wang Kidnapped a Bride, about a local wealthy family’s son who mistakenly kidnapped a young scholar and ended up matching the marriage between his sister and the scholar, was converted from a classical costume opera originated from the Shanghai area. Mother played Tiger Wang. She not only had to act as a man, wear special costumes and lip-synch all the songs for the entire movie, but she practiced really hard to learn the special theatrical opera acting styles that normally require years of trainings. I was extremely proud of my mother’s efforts, and the movie also marked a significant highlight of her career.

GS: Your father, Wong Tsao-she, was an award-winning film editor. Do you have a favorite film of his and if so, why is that movie a favorite?

SWB: I was too young to appreciate editing techniques. My father unfortunately passed away at 57 years old of a heart attack.

GS: Do you think that, growing up in a film family, it was your destiny to also be involved in film in some way?

SWB: Not exactly, but I definitely grew up watching a lot of movies. I watched almost every film that my parents were involved in. My father was a full-time editor of the studio and if the studio produced 30 films a year, he edited all of them. My parents also took us to watch a lot of Hollywood movies that were exported and released in Hong Kong.

GS: What is your personal preference when it comes to movie genres and why?

SWB: I like almost all the genres as long as the films possess a strong, intelligent script.

GS: What is your all-time favorite movie?

SWB: Cinema Paradiso! I absolutely adored how the village people grew old alongside the theatre; the father and son relationship between the projectionist Alfredo and the little boy; and still today, my dream is to own my own theatre and share films that I love with other people.

GS: The original Sophia’s Choice movie series launched in Beijing in the early 1990s at a time when you were working in the business world. How do you see business and film working in conjunction with the other?

SWB: The original Sophia’s Choice, showing primarily Chinese films with English subtitles, was a bi-weekly event at one venue for about 200 seats. It was targeted primarily for an English-speaking audience. I hired a full-time Chinese national assistant to handle all the marketing and promotional activities as well as the actual operation of the screenings. I took care of the films’ selection and moderated the Q&As as well as being the interpreter for the talent participating in the screenings. It was doable. My Chinese business counterparts also appreciated my efforts in promoting Chinese culture through Chinese movies. Both business and film careers prospered and developed simultaneously except in different scopes.

GS: You were the managing director of the Chicago International Film Festival. Can you please share one or two of your fondest memories of that experience?

SWB: My fondest memories include giving the entire seasonal staff the preparation talk at the beginning of the season every year; the post-festival thank you luncheons when everybody (staff and sponsors) relaxed and had fun sharing anecdotes; and lastly seeing how the International Connections summer screenings grew to today’s 20+ films/countries from the original six films/countries’ collaboration when I initiated the series.

GS: What can you tell me about the process of selecting films for the current iteration of Sophia’s Choice —Asian Pop-Up Cinema, which showcases Asian language films and how has it evolved over the years?

SWB: Over the last 15 years while heading up different not-for-profits here, including two non-film related (Fulcrum Point New Music Project and Redmoon Theater), I still maintained a close connection with the Far East Film Festival in Udine, Italy, having served as their Hong Kong coordinator starting in 1999. I’ve attended at least 12 of their festivals since then and met and befriended many filmmakers, producers and film festival directors from Asia throughout the years.

The program that I selected for the inaugural season of Asian Pop-Up Cinema were chosen from films that I saw at the 17th Udine Festival in April this year; plus other recommendations from my Advisory Board members who are based in the Asian countries where the films were made. For the inaugural season, my objective is to present contemporary films with modern day stories that provoke interesting Q&A discussions. The films also need to be entertaining and accessible for the general public.

GS: Why was the Wilmette Theater selected?

SWB: Wilmette Theatre is a unique, independent film house whose innovative programming attracts smart audiences similar to what Asian Pop-Up Cinema is targeting. I’m hoping this location brings the films closer to the doors of busy parents living in the suburbs.

GS: What do you hope to achieve with the Asian Pop-Up Cinema series?

SWB: I hope to develop and cultivate a strong audience base in preparation for launching a full-fledged Chicago Asian Film Festival with in-person participation by top artists and talent from Asia. We are a non-profit, and so providing that funding is available, I would like to see Asian Pop-Up Cinema continuing to ‘pop up’ during the fall, winter and spring seasons while climaxing each year at an official Chicago Asian Film Festival.