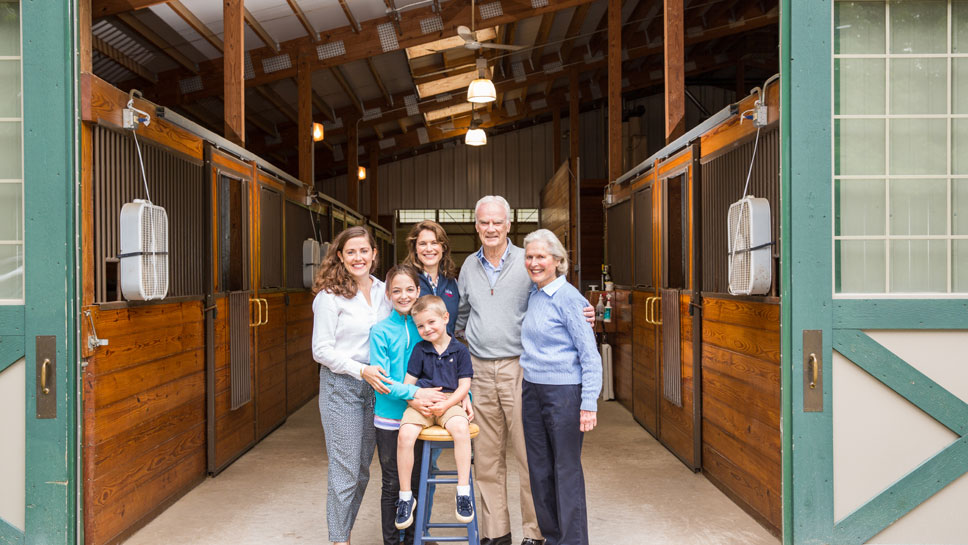 LAKE FOREST – As Lake Forest Open Lands prepares for its 28th annual Bagpipes & Bonfire celebration on September 27, one of its founding families—the Lillards of Lake Forest—share why this organization’s prosperity is so important to them and to the future of our community.

To sit in John and Paul Lillard’s living room, a beautiful light-filled sanctuary at the center of their home overlooking their lush green Lake Forest acreage and horse farm, is to know what’s most important to them. “It didn’t look like this when we arrived here,” explains the ever-modest Lillard patriarch John, his gaze directed at the pond just outside a bay window and buckthorn-free horse trails. “We made the pond bigger to create an island for the ducks. In our early days here, I would come home from work and take a chainsaw out to the buckthorn,” he adds. “It was very meditative.”

“John and I were both fortunate enough to grow up in the country as children,” explains his wife of 60 years, Paula. “It has been part of us—always. Our romance actually started in the islands of Canada. The beauty of nature, the peace of it, has always been very important to us. When we had children, it became even more so. It’s essential for children growing up not just to have bits and pieces of nature, but to live in it, to explore it—to be in the world, not of the world. No matter where you live, you can find a way to do this.” The Lillards had five daughters who spent much of their childhood in nature as their parents hoped.

“My friends used to love to be dropped off at our house,” remembers John and Paula’s daughter Paula Lillard Preschlack, now a Governor at Lake Forest Open Lands. “We’d run barefoot outside or race the ponies. We’d always go over to the Farwells. Mrs. Farwell would always have cake or something like that for us. We’d sleep in the barn. We’d swim at night. We had complete freedom in nature. My whole life has been outdoors.” Today, the Preschlacks live just about 150 yards away from the Lillard family home. “It’s a grandmother’s dream,” Paula adds.

When the Lillards settled into their home some four decades ago, Lake Forest Open Lands was in its infancy. Having come from a town outside of Cincinnati with a thriving land acquisition and preservation organization similar to Lake Forest Open Lands, John—his own property spanning 97 acres in the 1980s—knew how vital such a body could be to the community and joined.

In addition to hiring Steve Christy to be Lake Forest Open Land’s first full-time employee and executive director, John was instrumental in creating the Middlefork Savanna, urging its preservation by the Lake County Forest Preserves (LCFP). He sold the county 36 acres of his own land and later placed an additional 15 acres adjacent to these parcels in conservation easement with Lake Forest Open Lands. These steps also encouraged Lake Forest Open Lands to purchase Middlefork Farm and create the Middlefork Farm Nature Preserve, ultimately spurring on the restoration of the Elawa Farm buildings and park. More recently, John has worked with the LCFP to restore the Ogden Armour Bridge over the railroad tracks to connect the Middlefork Savanna with other preserved lands to the west and south. In all of these actions, John’s efforts have looked far into the future in the preservation and enjoyment of our local open spaces. “John really was a pioneer,” adds his wife.

“What’s so important about Open Lands is that in addition to acquiring land, they’re preserving it and restoring it so that you have more wildlife, more birds coming here, more wild flowers and fauna that used to be here now returning here,” adds his daughter Paula Lillard Preschlack. “Open Lands does so much more—they bring out all of the land’s national beauty and restore its history. A private organization has the power to do this, power that a government agency may not.”

John’s understanding of land preservation was complemented by his wife Paula’s pursuit and advancement of the Montessori teaching model. Having a love for teaching, Paula had spent many years in the classroom, always with the dream of wanting to put Dr. Maria Montessori’s educational philosophy to the test. In 1982, Paula, her daughter Lynn Lillard Jessen, and Jane Linari co-founded Forest Bluff, a Montessori school located in Lake Bluff.