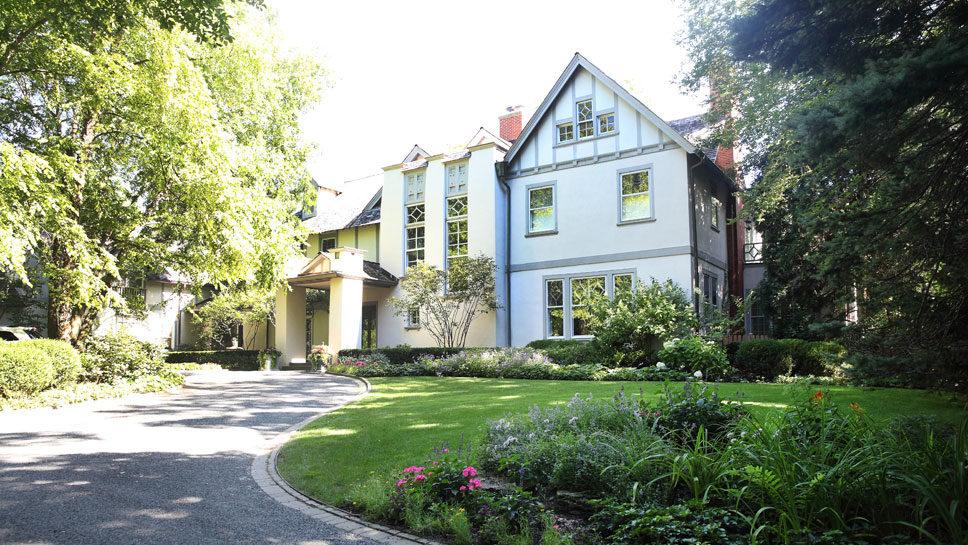 The Park family will open up their Lake Forest manor, and all its stories, during an upcoming home and garden tour. Photography by Caitlin Collins Saville

LAKE FOREST – The walls of 565 East Deerpath might not be able to talk, but there is one incredible story living inside the home, which will be the topic of conversation as the final stop and reception site of the Lake Forest Preservation Foundation House & Garden Tour on September 20.

The tour’s theme is “The Heart Of Old Lake Forest” and features some of the earliest developments in the town with homes in walking distance of the business district, Lake Forest College, and the First Presbyterian Church. “Some of the homes were constructed before the Chicago Fire. Most were among the first homes built in Lake Forest, and several have been updated and expanded with sensitivity to preservation,” says Allison Derr, vice president of programs for the Lake Forest Preservation Foundation.

At the centerpiece is 565 East Deerpath, an English Arts & Crafts style house that dates back to 1909 and has since become a statuesque fixture in the downtown area of town. At the culmination of the event, guests will be able to mingle inside the first floor and lush outdoor property.

The Tudor manor was designed by famed Chicago architects Pond & Pond, who were also behind the plans of Chicago’s Hull House, the Highland Park Club House, and various university student unions. It was previously owned by Arthur D. and Anna Holt Wheeler, some of the earliest graduates of Lake Forest College in the late 19th century, with Arthur going on to become instrumental in Chicago’s burgeoning telephone industry.

The Wheeler couple called their estate “Thalfried,” which is German for “peaceful valley,” according to Arthur H. Miller, Emeritus Archivist and Librarian for Special Collections at Lake Forest College, who has been among the historians to study the home. It has remained mostly intact until renovations by future owner and local architect and developer Eugune Martin in the ‘80s, which significantly added a bridge that traverses the abutting ravine to access a modified main entrance on Deerpath (previously the entrance was on Washington Road).

Today, the 2.5-acre estate is owned by the Park family, Lake Forest residents for the past 15 years who have lived in this residence since 2009. The location of the property, just a quarter mile from the downtown district and a half-mile to Lake Michigan, was instrumental in the family’s decision to purchase the home, says matriarch Jeanna Park. “We’re right in the center of town practically but it’s also very quiet and secluded since we have the ravine in front, and we often see a lot of deer coming through our property.”

The Parks were drawn to the manor’s style after living in London for five years prior to moving to Lake Forest. “The gardens [in England] are really pretty, the countryside especially is very green,” says Park who also enjoyed the traditional English gardens and cottages in the family’s old neighborhood on the west side of Lake Forest, near Inverness. Armed with that inspiration and trips to the Botanic Gardens, the Parks called on landscaping team Rocco Fiore to help achieve a similar look in the back of their home, but one that also fits in with the natural setting of the ravine that runs across the front of the property.

“We are doing some different perennial plantings in the backyard and have changed some of the front flowerbeds to be more colorful,” says Park, noting that they have not done any significant modifications past what Martin did in the ‘80s, which also offered the chance for pool renovations and resurfacing. For the Parks, keeping the open, family-friendly space was important since they have two teenage boys who like to be active outside: “We usually have a bunch of kids playing football or some kind of sport in the backyard. Our dogs enjoy the space for running and playing, too, and there are some quieter areas for relaxing and reading, or sitting outside and eating dinner.”

Though the Parks have opened their home before for various other functions for Ragdale and their Novel Affair event, as well as the Spirit of 67 Home Tour, this will be the first time their home is involved in the Lake Forest Preservation Foundation’s House & Garden Tour, which celebrates its 6th annual edition and attracts upwards of 150 people. All proceeds benefit the Lake Forest Preservation Foundation projects and providing programs for members and the community.

Tickets are $85 in advance and $100 day-of-event. Patron tickets are also available for $150 as well as sponsorship opportunities. More information can be found at Lake Forest Preservation Foundation.