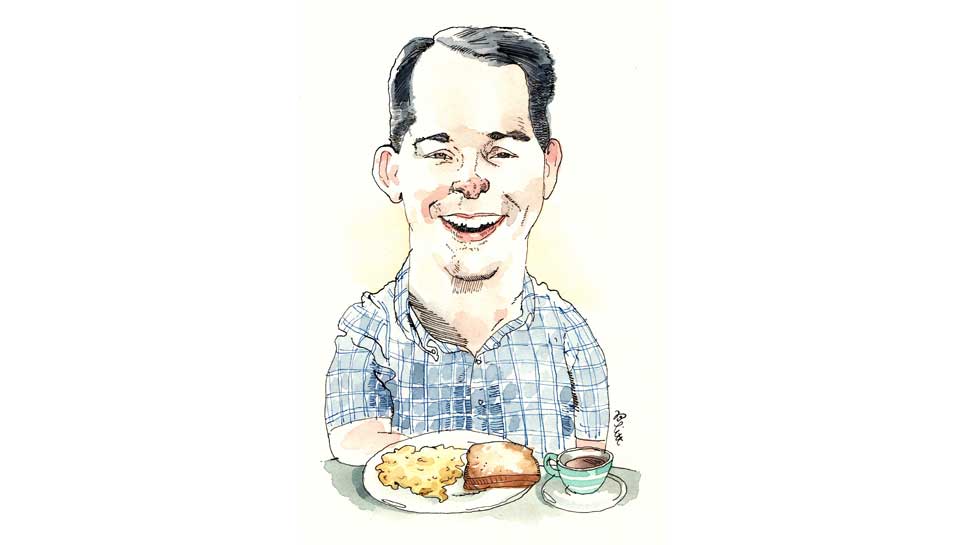 Ensconced in a chair at The Grille on Laurel restaurant, Gov. Scott Walker thinks for a moment about the 17-person strong Republican field for President. Businessman Donald Trump is a publicity magnet; former Florida Gov. Jeb Bush is raking in tens of millions of dollars. How does the Wisconsin governor distinguish himself from the pack?

“I’ve fought and won,” says the 47 year old, dressed in a dark suit with an American flag pin nestled on his lapel.

In fact, few governors in American history have faced the vitriol of voters the way Walker has — and emerged on top. He reined in Wisconsin’s public unions (the same ones whose pension bill in Illinois threatens to sink the state) while enduring death threats and rabid protests. The provocateur was Act 10, a bill Walker proposed that curbed collective-bargaining rights and became law in 2011. He also signed a right-to-work law. Despite Wisconsin’s Democratic leanings, Walker has won two elections and even prevailed in a rare recall effort.

Before his recent exclusive interview with The North Shore Weekend, Walker regaled more than 50 campaign contributors and potential donors during a breakfast featuring scrambled eggs and bacon at The Grille on Laurel, a gathering organized by long-time friend and Lake Forest resident Karen Schmid.

Like one of his political heroes, President Ronald Reagan, Walker promotes a small set of clear principles. Should he be elected in 2016, his three-pronged plan involves reform, growth and safety.

Reform essentially would transfer power back to the states and give them a bigger chance to decide how to spend money than Washington. By repealing ObamaCare and lowering the tax burden on consumers and employers, Walker — who is a big fan of the 1986 tax reform Reagan championed — believes solid growth will follow.

“We have a President who drew a line in the sand (in Syria) and let them cross it,” Walker notes. “Iran has not fundamentally changed since the (1979) hostage crisis.”

Articulate and passionate, Walker was happy to sink his teeth into presumptive Democratic nominee Hillary Clinton.

“As bad as this President has been, Hillary would be infinitely worse,” he says. “Everywhere Hillary touched as Secretary of State is worse off. People like Hillary think you grow wealth in Washington.”

Though Walker is behind in the Republican polls and has suffered criticism about the direction of his campaign recently, his position as governor is an asset. From 1977-2009, former governors occupied the Oval Office save for a four-year stretch (President George H.W. Bush). Governors are often seen as chief executives and leaders; if they can run one of the 50 states successfully, the Presidency is the next natural step.

Still, why is the conservative aiming for the toughest job in the land? He cites two reasons: Alex and Matthew — his two boys.

“I want my kids to inherit a better life,” Walker says. “That’s why when they threw death threats and protestors at us in Wisconsin, I didn’t back down.”

Walker has found important support south of the border. Richard and Elizabeth Uihlein of Lake Forest — whose Uline company moved from northern Illinois to Pleasant Prairie, Wis. in 2008 — are top Illinois supporters, giving more than $2 million to Walker’s super political action committee, according to the Chicago Tribune. Todd Ricketts of Wilmette, part of the family that owns the Chicago Cubs, is another major donor as well as Walker’s national finance co-chairman.

“I think Bruce is incredible. He has a similar mindset to do the right thing. It’s about leadership.”

A self-described policy geek, Walker loves history — perhaps as much as his main hobby, riding his Harley motorcycle. The book “Team of Rivals” by Doris Kearns Goodwin is a favorite, and he says if he’s elected, his Cabinet would reflect Lincoln’s decision to keep rivals close to him, especially given the strength of the Republican field.

Just like 2012 Republican Vice Presidential candidate Paul Ryan, a Wisconsin Congressman, Walker worked at a McDonald’s in his youth. Unlike Ryan, the Wisconsin native took orders at the counter.

“He had to work in the back because it was believed he didn’t have the interpersonal skills,” Walker recalls. “I wonder what that manager thought when he saw him at the Republican National Convention.”

Walker hopes to appear at the 2016 convention in Cleveland to accept his party’s nomination, and the Republican debate this week in California will be crucial to that goal. The buster of unions in his state then wants to give the State of the Union. The presidential campaign to reach that exalted spot is grueling, but it features light moments as well.

Handed a gift of coasters with the Lake Forest logo on them at The Grille on Laurel, Walker was told, “When you have your next Schlitz, hopefully you can use them.”

That prompted Walker to share a story about campaigning at The Billy Goat Tavern in Chicago. Double cheeseburger in hand, he was ushered behind the bar and liked what he saw: the beer that made Milwaukee famous.

“I poured a cold one,” he recalls. “I thought, ‘If I don’t get the Republican primary vote, at least I’ll get the Schlitz vote.’ “